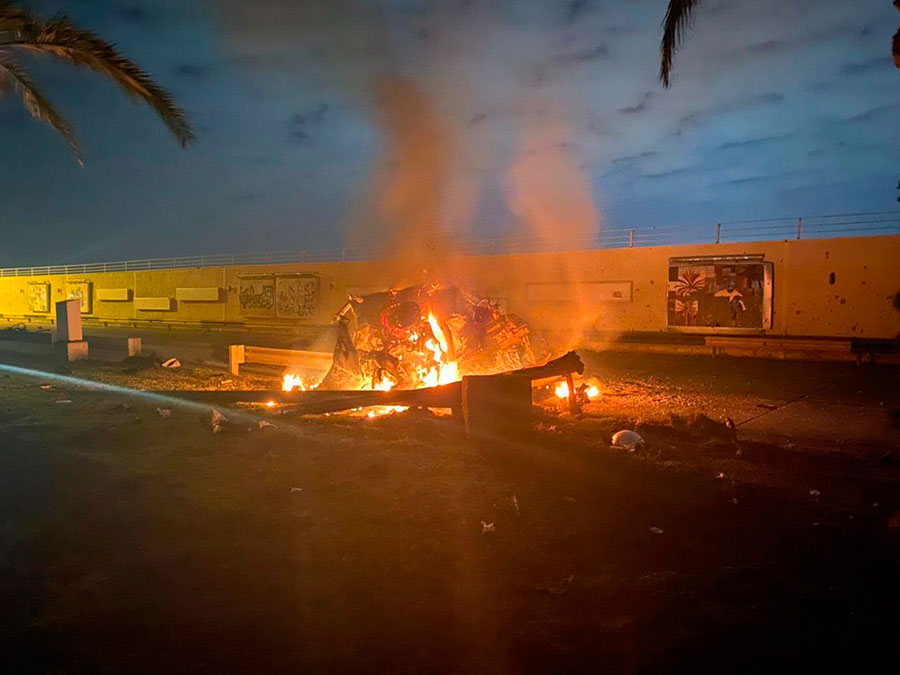 It’s been a dramatic and worrisome start to 2020.

We’re just days into the new decade, and already the Middle East is set to explode, with the potential for worldwide repercussions. Trump ordered a drone missile attack Friday at the Baghdad airport that killed Iran’s top military commander Qasem Soleimani along with Iraqi militia leader Mahdi al-Muhandisa.

Former U.S. vice president Joe Biden said Trump had “tossed a stick of dynamite into a tinderbox.” He should know, as he cast one of the deciding votes that led the U.S. into the Iraq War, with its consequences still reverberating today.

Meanwhile. Australia is ablaze, Trump has raised more campaign funding in the last quarter than any Democratic candidate and credit card bills with Christmas spending are coming due.

Okay, that last one is not near as devastating or terrifying as the fire storms raging in Australia or the possibility of Trump being re-elected or America on the brink of all-out war with Iran.

Just when it seems there’s nothing to celebrate, other than the slight lengthening of daylight after the winter solstice, along comes a simple but profound act of grace: the Pope’s apology.

On New Year’s Eve, the 83-year old pontiff was filmed on his usual walk through St. Peter’s Square to greet followers. When he veered away just before he reached a woman who’d been eagerly awaiting him, she grabbed his arm with both hands and yanked him over to her.

He pulled away, slapped her hand, turned his back angrily and left, visibly annoyed. The video of the Pope’s slap and snit was played over and over on news broadcasts and online.

“Frankly, the pope kind of lost it,” Catholic writer John Allen Jr. told CNN. The next day, Pope Francis apologized to the world for his behaviour. On Jan. 1, he included these words in his scripted homily:

“Love makes us patient. So many times we lose our patience. Me too, and I apologize for yesterday’s bad example.”

Apologies don’t come easily, especially to men, most especially to powerful men. The Pope’s simple statement – “I apologize for yesterday’s bad example” – is a lesson in how it should be done, perhaps one of the most important lessons the pontiff could teach.

Fortunately, in a world on edge and facing dark days, there are other examples of enlightenment.

Inspired by former U.S. President John F. Kennedy’s 1961 Moonshot where he vowed to have a man on the moon by the end of the ’60s, the Earthshot Prize is a grand environmental initiative announced this week by Prince William, who has called for “a decade of action to repair the Earth.”

A multi-million dollar prize will be awarded to five “visionaries” every year for the next 10 years who are trying to solve “Earth’s greatest environmental problems.” The goal is to provide “at least 50 solutions to the world’s greatest problems by 2030.”

The prize was developed by the Duke and Duchess of Cambridge in consultation with more than 60 organizations and experts and will be administered by their Royal Foundation.

Natural history guru and broadcaster Sir David Attenborough, who narrated the video announcing the prize on the Kensington Palace social media accounts, called it “the most prestigious environment prize in history.”

Watch David Attenborough’s introduction to the Earthshot Prize below

And in a meeting of enlightened minds, 93-year-old Attenborough Skyped 17-year-old Swedish climate activist Greta Thunberg, and it was mutual admiration all around, after the teenager told the nonagenarian that his documentaries were her inspiration.

“I’m very grateful to you,” Attenborough told Thunberg, who was guest editing a special edition of the BBC Radio 4 program Today on Dec. 30. “We all are.”

Meanwhile, outgoing Bank of England governor Mark Carney – the former governor of  the Bank of Canada who is slated to take over as the United Nation’s special envoy for climate action and finance this year – has taken a different approach. In an interview with the BBC as  part of Thunberg’s Today program, he compared the climate crisis to a financial crisis, noting the financial services sector is moving too slowly to divest from investments in oil and gas, putting trillions of dollars at risk.

He said companies that ignore the climate crisis will not only contribute to the warming of the earth beyond the 1.5 C degree cap agreed upon by governments including Canada who signed the Paris Agreement in 2016,  they risk going bankrupt as fossil fuel becomes environmentally untenable, and they are left with stranded assets.

“A question for every company, every financial institution, every asset manager, pension fund or insurer: what’s your plan?” Carney said.

Apologies and activism: it’s what the world needs now. Or, as baby boomers used to say, “Make love, not war.”