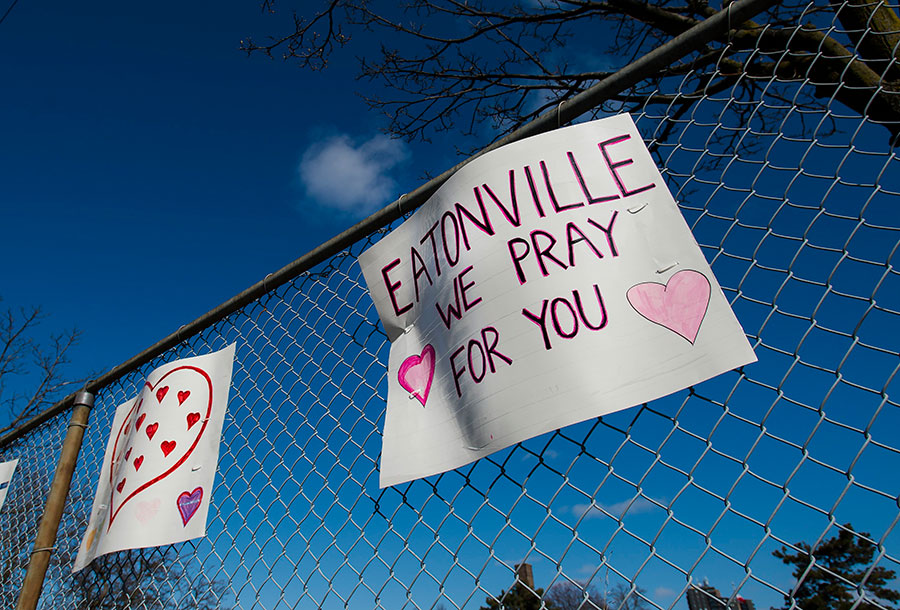 Supportive signs for health-care workers hang on a fence near Eatonville Care Centre in Toronto, a home ravaged by COVID-19. Photo: The Canadian Press/Nathan Denette

With Ontario becoming the second province to call in the army to help its beleaguered long-term care facilities cope with COVID-19 outbreaks, families with loved ones in elder care homes are beginning to express grave doubts in a system that seems completely incapable of providing a safe environment for our vulnerable elderly.

“We know that close to half of the deaths that we’re tracking are linked to long-term care facilities,” said Dr. Theresa Tam, Canada’s chief medical health officer. “These deaths will continue to increase, even as the epidemic growth rate slows down.”

Across the country but especially in Quebec and Ontario, the pandemic has wreaked a terrible toll on elder care facilities. In the worst-hit homes, many staff have become infected and forced to stay home, meaning residents have been left in beds, and isolation and hygiene practices have not been followed. The most horrifying example occurred at the Residence Herron in Quebec, where patients were basically left to die in their rooms as sickened staff abandoned their posts, and management lost complete control.

“I have never seen conditions like these,” says Norma Nicholson, a retired nurse from Mississauga, Ont., and former supervisor of education at a local nursing home. “It’s an atrocity to treat our seniors this way.”

Along with Anson Place Care Centre in Hagersville, Ont., Eatonville is one of several nursing homes that has become so overwhelmed by the pandemic that a health-care union is seeking a court injunction to force the government of Ontario to step in and take it over.

These homes “did not put into action what needed to be done,” said Sharleen Stewart, president of the Services Employees International Union, on the reasons for her alarming request to the province. “This was pure negligence.”

“We need to do better,” admitted Linda Calabrese, vice-president of operations at Responsive Management Inc., which runs Eatonville, in a statement to the media.

Nicholson, who has written two books and is extremely active community volunteer, describes how the horrible situation unfolded in her brother’s care home as the crisis worsened.

When family members were banned from visiting, she and her nephew Ron (Roy’s son) began having regular Skype sessions with Roy. In an early April session, she noticed that his care was greatly deteriorating. “He was in bed looking very unkempt,” she said. “He was growing a beard, which he’s never done. No one seemed to be taking care of him.”

The next time Norma and Ron called, Roy’s appearance had gone downhill. “He was still in bed,” recalls Nicholson. “His teeth had not been brushed, and his fingernails were dirty, like he had been gardening.”

Even more heart-wrenching, Roy was dressed in someone else’s clothes. “He was wearing a bright orange shirt that we didn’t buy him. I was very upset about that,” she said, noting that her brother had always been a very “dapper gentleman.”

On this occasion, when she asked Roy how he was feeling, he said that he was being fed but “nobody gets me up” and “nobody bathes me.”

“It was so upsetting,” says Nicholson. Her anxiety for her brother increased when she saw on the news that a woman at Eatonville, who sits at the home’s dining table next to Roy, had died of COVID-19.

She called everyone from the executive director to charge nurses at Eatonville to find out whether her brother had been tested and what the results were. None of these phone calls were returned. “The worst part is not knowing,” she says. “It’s like being in limbo.”

Finally, after days of hearing nothing from the home, she emailed us with good news. “My brother’s COVID-19 test was negative!! Also informed that staff gave my brother a bath in bed today, and they will try to have him up for a short time tomorrow morning!! I feel very blessed.”

After this harrowing experience, Nicholson would like to see a complete overhaul of the long-term care system, from staffing to hygiene and infection control. She’d also like to see more inspections of these homes that carry stiff penalties – “They should temporarily close them until they fix things.”

But she’s not overly optimistic that meaningful changes will happen. “I don’t think we’ll see change,” she says. “Things will just go back to the way if they’re not being monitored.”

Nicholson’s pessimism is shared by CARP members who expressed their lack of faith in long-term care’s ability to cope with COVID-19 in a poll released earlier this week. CARP asked its members to share their views on how well equipped private and government-run elder care homes – seniors residences, nursing homes and long-term care facilities – were equipped to deal with the COVID-19 crisis.

“We knew from reports coming from China and Italy how this virus was affecting older populations,” says Marissa Lennox, CARP’s chief policy officer. “Yet it feels like long-term care was prioritized last in this entire process.”

While Lennox praises those facilities that have coped well during the crisis, “Many other homes struggle to deliver even minimum standards of care. This is unacceptable.” She says, “Governments have a moral responsibility to ensure our most vulnerable members of society are cared for properly.”

The CARP poll identified the main areas of concern that families have about the long-term care system’s ability to handle an outbreak of any type but especially one as pernicious as COVID-19.

These leading areas of concern were:

Unless these issues are addressed, we’ll continue, as Prime Minister Justin Trudeau said Thursday, “abandoning our parents, our grandparents, our elders – members of the greatest generation who built this country.”

“My brother worked for 40 years in Canada,” Nicholson says. “He deserves a place to live where he can get proper health care.

“If Roy lives through this, I’m going to continue to try to get him out of there. I pray that he has a better place to live in.”