Dens of Equity: Meet the Canadians Finding Creative Ways to Age in Place 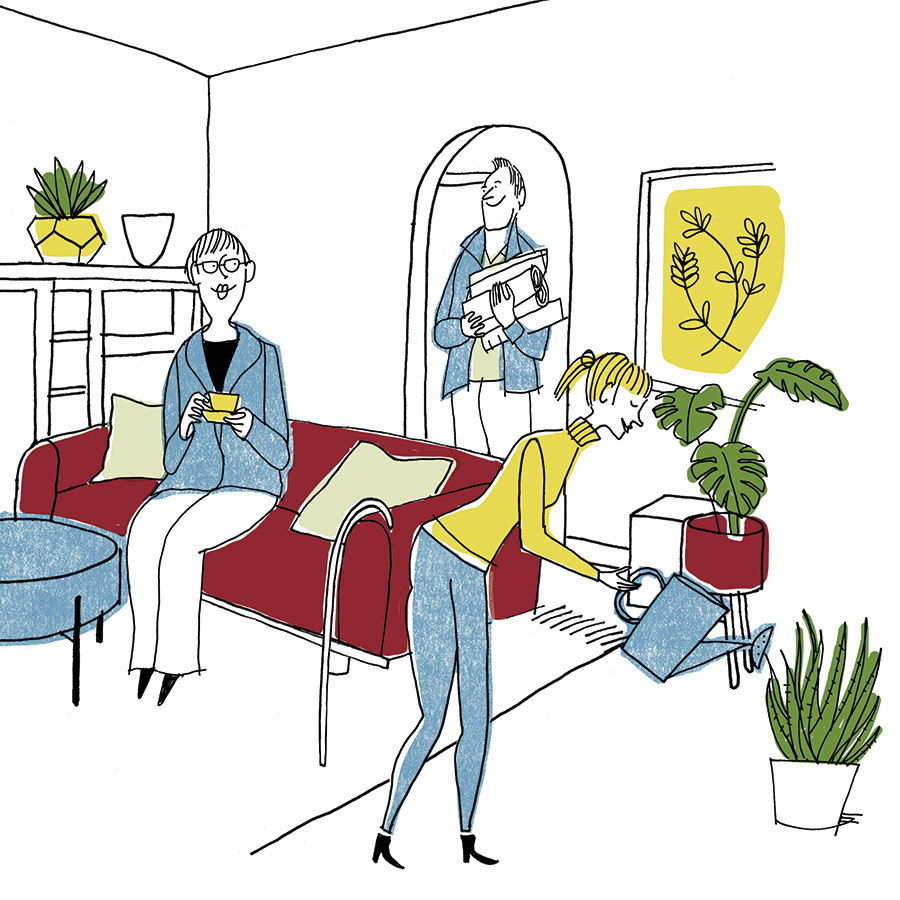 Many older Canadians are suffering from a different kind of housing crisis than those struggling to get into the market as they struggle with a mortgage or upkeep of a house on a fixed income. Illustrations: Alanna Cavanagh

In the middle of a housing crisis, many empty nesters live on fixed incomes in big houses as they face health issues. Noreen Rasbach talks to three older Canadians who found unique solutions to aging in place.

There’s an affordability crisis in Canada’s major housing markets, but we don’t need to tell older homeowners that. They’ve been sitting in what millennials would consider palatial digs, watching the equity in their homes balloon as the average price of a house in Vancouver eclipses $1 million and Toronto is not far behind at $828,200.

As vacancy rates plummet, rents approach the stratosphere and “renovictions” — where landlords evict a building’s tenants to make extensive renovations and subsequently raise rents — have entered the lexicon, many Canadians have an altogether different housing challenge.

A housing crisis may be taking place around them, but these empty nesters have the opposite problem: too much house and the financial worry of keeping the roof from crumbling overhead when they live on fixed incomes. Three-quarters of Ontario seniors 65 years and older live in houses too big for their needs, according to a 2017 study by the Canadian Centre for Economic Analysis, a Toronto-based research firm. In all, there are more than five million empty bedrooms in Ontario, the study found, with 2.2 million in the Greater Toronto and Hamilton Area alone. In Greater Vancouver, the number tops 800,000.

“It’s an issue for so many Canadians,” says Kelley Keehn, a personal finance educator, author and consumer advocate for FP Canada, an organization that sets standards for the designation of certified financial planners. “The conversation 20 years ago used to be focused on downsizing as soon as the kids left. However, more couples want to keep the status quo and find ways to stay put.”

When making any housing decision, financial considerations are important, but so, too, is lifestyle, says Keehn. “You really want to spend time envisioning your next 10 or 20 years” when deciding where to live.

It’s advice that these three women, one single and two with spouses, have taken to heart. They have come up with very different solutions for their next 10 or 20 years.

Dianne McDonald was a newly divorced mother of three boys when she put $20,000 down on a $60,000 house in Halifax in 1976 and decided to rent spare rooms to university students.

With the help of her tenants, she was mortgage-free by the time she sold the house for $110,000 in 1985 and moved to northern Alberta to take a teaching job at Fairview College. She hasn’t had any house debt since. McDonald has almost always home-shared, buying large houses outright and renting out the extra space — a feat all the more impressive because she has bought and sold seven homes across the country.

“I moved around a lot for teaching jobs, but I always tried to own a house wherever I went,” she says. “And home-sharing helped me do it.”

When McDonald retired in 2012, she bought a gorgeous, Victorian 2½-storey heritage home for $160,000 in Middleton, N.S., located in the picturesque Annapolis Valley. Now 77, she has mobility issues and walks with a cane, so she relies on her tenants — she often calls them participants — for much of the home’s upkeep, everything from changing light bulbs and carrying in large bags of dog food to painting the house’s numerous shutters.

Home-sharing, which used to just help financially, is now crucial. “I couldn’t manage without my tenants,” she says. “I couldn’t live in this house otherwise.”

McDonald lived in Grande Prairie, Alta., for more than 10 years, where she was a board member for the since-disbanded local organization of HomeShare, a national non-profit that facilitates agreements between homeowners and participants. She is now HomeShare Canada’s point person for Nova Scotia, although there is no official program in the province. When someone inquires about home-sharing, she sends out a detailed tool kit — 193 pages that is part policy document and part how-to guide, covering how to screen tenants and create a workable agreement. No detail is spared, from whether smoking is allowed to whether fridges and televisions are provided or shared.

McDonald says agreements are critical to happy home-sharing, but admits she doesn’t have one with her current participants.

“I know I should, but what we have works for us.” She has three people in her home now — two men, one 20 and the other in his mid-30s, and one 28-year-old woman — all of whom pay her rent. She pays them a per-hour rate for chores.

Most of the people staying with her were referred by friends she trusts. And she has a surefire way to determine if they are compatible: she watches how they interact with her dog, Rebecca Jean, a six-year-old mongrel, and cat Annabelle, who is eight.

“If they get along,” she says, “that’s one of the best signs we will too.”

Maggie de Vries, 58, and her husband, Roland Kokke, 65, packed up their Vancouver townhouse almost three years ago and moved across the water to Ladysmith, B.C., a town of about 8,500 people on the east coast of Vancouver Island.

The couple had considered the move for a few years and the time finally seemed right. Kokke was retiring from his 40-year career as a mechanical designer at TRIUMF, the University of British Columbia’s particle accelerator, and de Vries, an author, could teach her creative writing online courses for UBC from anywhere.

So, the couple sold their cramped city townhouse for a little more than $800,000 and bought a larger house with an enormous yard and garden, for about $500,000.

“We upsized instead of downsized,” de Vries says, laughing. “With both of us home, we needed separate spaces.”

In their new home, there’s room for de Vries to work — “I love quiet” — and to conduct writing workshops for locals, while her husband pursues his own interests and enjoys life in retirement. They both like boating, and Ladysmith, a gateway to the Gulf Islands, has a beautiful community marina. They live about 15 minutes from the Nanaimo airport, so her mother is able to visit from Guelph, Ont., without a lot of trouble.

De Vries advises others who want to make a similar move from big city to small town to consider more than just finances: they also need to find their social circle.

“It’s easy to meet people but it takes longer to build real connections with people, real friendships. For me, that’s just starting to happen now.”

It helped that she already knew one couple well — her husband’s cousin and his wife. And she makes an effort to get to Vancouver every couple of months to visit old friends. “I really miss them,” she says.
She also believes it’s important to get involved in the community, “contributing and participating in a more meaningful way. I’ve been struggling with how to do that and what I want to do.”

It’s essential to de Vries, who became an activist after her sister, Sarah, went missing from Vancouver’s Downtown Eastside in 1998.

“For 20 years, part of my life circled around issues to do with my sister – her disappearance and violence against sex workers. [With this move,] I was ready to stop that for something else. I just haven’t figured out yet what that might be.”

When she was an anthropology professor at Toronto’s York University, Margaret Critchlow travelled to the South Pacific to research the co-operative culture and consensus decision-making in villages there. At York, she taught a course in alternative housing around the world, including co-housing, a model developed in Denmark in the 1960s.

“I liked the model,” says Critchlow, who sold her small house in Oakville, Ont., one of Canada’s wealthiest towns, after she moved west in 2004. “When I moved out to British Columbia in the early 2000s, I got talking to friends here, and we thought: ‘Why don’t we just do it?’”

“It” turned out to be Harbourside, a co-housing community in Sooke, B.C., a 45-minute drive from Victoria.

In 2011, the dream started to become reality. She and her friends connected with Cohousing Development Consulting, the Burnaby-based firm that has created most of the co-housing in B.C. Together they built the first senior-focused, co-housing community in the province, which has 31 condominiums on a two-acre waterfront property.

“The idea behind co-housing is that the homes are compact and are smaller than the usual North American homes,” says Critchlow, 72. “It’s housing built at cost but with more environmental features and more common spaces than conventional places, so it ends up costing about the same as a conventional condominium.”

The shared space at Harbourside is massive and includes a wharf, orchards, a workshop, a gym, fenced gardens and a 3,000-square foot common building with a library, kitchen and guest accommodations.

And while the community uses a standard condo structure — with a monthly fee to cover maintenance — extra participation is expected. Members do as much of the work as possible; if they choose to sell, they are asked to do so privately with community support and give one per cent of the purchase price to a community fund used for projects.

Critchlow says there are savings that come with co-housing. The energy-efficient design means that utility bills are low — she pays $35 a month, not including cable, for the unit she shares with her husband, John Boquist, a retired fisherman.

But the chief savings come from the real purpose of co-housing — its cooperative culture. Harbourside residents share decision-making and support each other, which Critchlow says helps people live independently longer. The year she moved in, Critchlow had two hip replacements. Residents organized meal plans to support her recovery for six days after she came home from hospital.

For now, she is living the dream that took more than five years to achieve. She appreciates the connections and friendships she has formed as well as “the ability to flourish, which we hoped to be the case but we weren’t sure.” And she is bringing the experience to others, serving as a consultant on two new co-housing projects on Vancouver Island — West Wind Harbour in Sooke, which will open in late summer, and Ravens Crossing in Sidney, which is scheduled to open in mid-2021.

A version of this article appeared in the May/June 2020 issue with the headline, “Dens of Equity,” p. 84.

In Living Colour: How My Mom Made Our House a Home