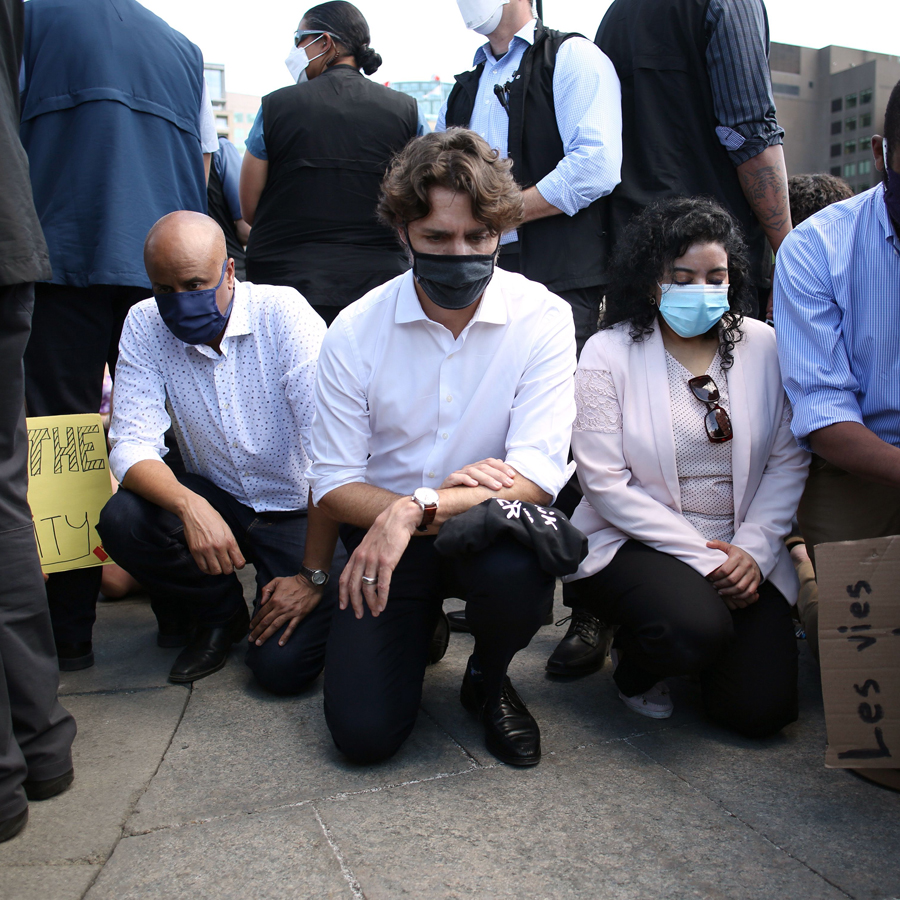 Prime Minister Justin Trudeau spent the bulk of his daily media briefing today defending his presence at an anti-racism rally in Ottawa on Friday.

Trudeau is catching a lot of criticism for showing up at the mass gathering — where maintaining physical distancing restrictions was close to impossible — despite the fact he repeatedly tells Canadians to do no such thing.

Conservative leader Andrew Scheer called out Trudeau’s apparent hypocrisy, saying that he understands “why people are upset and confused” at seeing the prime minister “completely ignore those types of health guidelines or recommendations.”

Trudeau, however, wouldn’t apologize for his actions, saying it was a matter of choice. “We’re constantly being called upon to make difficult choices,” said Trudeau. “Of course, we must follow public health recommendations — that’s what I tried to do — but I also felt it was very important that the prime minister be there to listen and hear the voices of thousands of Canadians who want us to act quickly. That is the choice that I made, and I believe that it was the right choice.

“For me, it meant showing respect for all the people demonstrating around me, and it meant saying that things are not right. We have a system that continues to discriminate against Black Canadians, racialized Canadians and Indigenous Canadians.

“It was important for me to attend,” continued Trudeau. “To look out the windows of my office and see thousands upon thousands of young Canadians of all ages stand in solidarity to want to see change happen.”

While the Liberal leader acknowledged that “we need to follow public health instruction as best as possible” and said he wore a mask for the occasion, he also claimed, “This is a time for people to make sure their voice is heard.”

Speaking of the Parliament Hill rally and the many others like it that took place across Canada on the weekend to protest police racism against Black and Indigenous communities, Trudeau felt he needed to hear what “community leaders and Black Canadians are calling for.”

“Many people in this country simply do not feel protected by the police,” he continued. “In fact, they’re afraid of them. It’s about poverty and mental health. It’s about the fact that people are all too often treated like criminals instead of receiving the support they need.

“We as leaders need to recognize that these problems are tied to economic inequality and the racialization of poverty. We need bold measures to address this.

One of the “bold measures” he discussed was equipping police with body cameras that would record their interactions with the community. Trudeau said he had recently spoken to RCMP Commissioner Brenda Lucki about the cost and logistics of immediately arming officers with the technology, calling it a “a very important” measure that shows “concrete, direct action” and “transparency.”

He also said he would bring up the possibility of provincial police forces wearing body cameras when he spoke with the premiers on Thursday.

On a day of multiple demonstrations across Canada and the United States against racism and the police-related killings of Black men and women, Prime Minister Justin Trudeau joined a crowd of protesters on Parliament Hill, knelt on the ground and put his hand over his heart in a show of solidarity.

In 2016, as Trudeau marched in the country’s largest Pride parade in Toronto, Black Lives Matter Toronto staged a protest that shut the parade down for 25 minutes. Part of their demand was that police be banned from future parades.

Kneeling has been a symbol of protest against the death of Black men and women at the hands of the police since 2016 when NFL quarterback Colin Kaepernick starting kneeling during the National Anthem before games. This became the focal point of a culture war in 2017 when U.S. President Donald Trump said NFL owners should fire players who protest during the anthem. Though he was one of the top performers in the league, Kaepernick’s contract with the San Francisco 49ers was not renewed and no team would sign him.

This is the 11th day of protests sparked by the murder of George Floyd, an African-American man, in Minneapolis by four police officers on a public street in broad daylight. As cellphone video from witnesses show, Floyd, who had not resisted arrest, was handcuffed and laying on his stomach, pleading that he could not breathe, as police officer Derek Chauvin knelt on his neck for 8 minutes and 46  seconds. Two other officers  knelt on Floyd’s back while the other stood watch. All four officers were fired, and Chauvin faces second-degree murder while the others have been charged with aiding Floyd’s death.

The situation was inflamed as, in the month before Floyd’s murder, another Black man, Ahmaud Arbery, was chased and gunned down by a former prosecutor and two accomplices while he was out jogging. They were not charged until the video was made public a month later. Then there was Breonna Taylor,  a Black 20-something EMT worker who was shot dead by police officers after they entered her apartment without identifying themselves, looking for a suspect  who lived at another address and who was already in custody. None of the officers involved in those deaths have been charged.

Floyd’s case was reminiscent of the 2014 death of Eric Garner, a Black man who was killed by a police officer who used a banned chokehold on him as Garner kept saying he could not breathe. The police officer was also not charged.

Trump has called the protesters thugs and terrorists. Earlier this week, Trudeau took 21 seconds to respond to a question about Trump’s militaristic response to the most significant upheaval in race relations since the Civil Rights Movement.

In the past week, Canadians have been shocked by three more incidents involving police and Indigenous and racialized Canadians. In the small Nunavut community of Kinngait, a bystander took a video showing an RCMP officer arriving in a half-ton truck and dooring an intoxicated man and knocking him to the ground on Monday. The officer was suspended, and the 22-year-old man is now talking about suing the police.

On Thursday, concerned family members asked police to do a wellness check on 26-year-old Chantal Moore, an Indigenous woman who had just moved to Edmundston, N.B., from B.C. Edmundston police said they shot Moore to death in self-defence after she came out of her apartment building with a knife.

And in London, Ont., the mother of a 27-year-old Black man called police on May 4 for help because her son had barricaded himself in her apartment and was in mental distress, but after officers entered the apartment to try to talk to him, Caleb Tubila Njoko fell from the 15th floor balcony of the high-rise. He died in hospital three days later.

The latter two cases have eerie similarities to the case of Regis Korchinski-Paquet, a 29-year-old Afro-Indigenous woman who was also in emotional distress after a family dispute. Her family called 911 for help and asked police to take her to the Centre for Addiction and Mental Health, but after Toronto police went into the 24th-floor apartment unaccompanied by the family, Korchinski-Paquet died in a fall from the balcony.

“The videos and reports that have surfaced from across the country in the past few days are disturbing. And they bring to light the systemic realities facing far too many Canadians,”  Trudeau said at his daily press conference Friday before attending the demonstration. “Later today, I’ll be speaking with cabinet and to the RCMP commissioner. We need to ensure that each of these individual cases is investigated properly and we also need a larger reflection on changing the systems that do not do right by too many Indigenous people and racialized Canadians. We can’t solve all of this overnight. We need to make a change. We need to start today.”