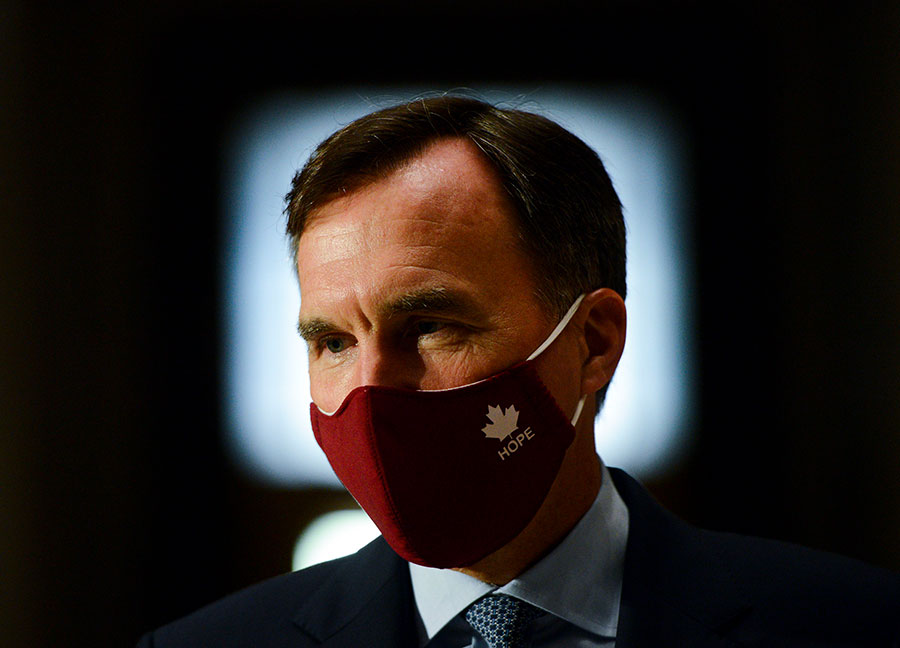 Minister of Finance Bill Morneau takes part in a media lock-up for the federal government's Economic and Fiscal Snapshot 2020 in Ottawa on Wednesday. Photo: The Canadian Press/Sean Kilpatrick

Finance Minister Bill Morneau released his long-awaited “Economic and Fiscal Snapshot,” revealing that the federal deficit has grown to $343 billion as a result of costly programs that became necessary to help Canadians and businesses survive the months-long lockdown.

“Faced with the most profound downturn since the Great Depression, our government acted to support the economy,” said Morneau in Parliament Wednesday, releasing the government’s first glimpse at our fiscal health since the pandemic began. “Every investment we made was in response to the COVID-19 crisis.”

“Through rapid and broad support, our government has been able to protect millions of jobs, provide emergency income support to families and help keep businesses afloat during the worst of the storm,” Morneau said in his speech.

The 168-page “economic and fiscal snapshot” document, which the Liberals are presenting instead of a traditional budget (despite howls of protest from the Conservatives), shows that the federal government has poured out $227 billion in direct support to individuals and businesses, which are struggling to survive a nation-wide economic lockdown that forced millions out of work and walloped corporate bottom lines. Spending to battle the health crisis included:

While the document reveals that job losses during the pandemic hit 5.5 million between February and April, it also suggested that these numbers would have been two per cent higher if the government had not stepped up its relief efforts.

On top of the costly spending programs, the document projects that government revenue from income tax will suffer a $70 billion decrease this year. The total shortfall will bring Canada’s debt-to-GDP ratio to 49 per cent, the highest it has been since the mid-’90s.

“The decisive and substantial support provided by the government helped prevent further damage to the economy this year by replacing lost income and avoiding higher unemployment,” the document read.

Morneau says that his government will no doubt come under criticism for the enormous size of the spending measures. However, he defended the programs, saying “the cost of inaction would have been far greater” and that without the relief programs, the burden of debt would have been placed onto families and businesses, “jeopardizing Canada’s resilience.”

The document, while certainly not upbeat, wasn’t all doom and gloom. Noting that the “worst is behind us,” it projects that although the economy will contract by 6.6 per cent this year, it’s expected to grow by 5.5 per cent in 2021.

And thanks to historically low interest rates, Morneau said that the cost of servicing this debt will not be as burdensome as it has been in the past. “We are working to make sure we manage this debt prudently,” he said, noting that debt payments will be spread out over the long term.

While Morneau was short on details about the economy’s ability to rebound back to normal, the document did forecast that the recovery will be “uneven and gradual” and that it largely depends on whether or not there’s a second-wave of COVID-19 like we’ve seen in the U.S.

“Our economic outcomes will very much depend on how we manage the health challenge,” he told reporters in a press conference before releasing his fiscal update.

He also noted that the government will propose extending the wage subsidy program for an indefinite period of time.

Speaking before the finance minister’s announcement, Opposition leader Andrew Scheer criticized the government for its lack of a recovery plan and for failing to curb spending before the crisis hit.

“What we haven’t heard yet is whether or not the Liberals actually have a plan to help get Canadians back to work and our economy back on track,” said the Conservative leader, adding, “Canadians cannot afford for Justin Trudeau to be wrong when it comes to our economic recovery.”

And NDP leader Jagmeet Singh said the cost of paying down the deficit must not fall on the shoulders of working Canadians. “Throughout this pandemic, we’ve been worried about people who have been struggling to pay their bills and put food on the table. Instead of cutting help to people who are desperately in need, the Liberal government should focus on making sure those who can pay — those who are the wealthiest, the ultra-rich — are paying their fair share.”