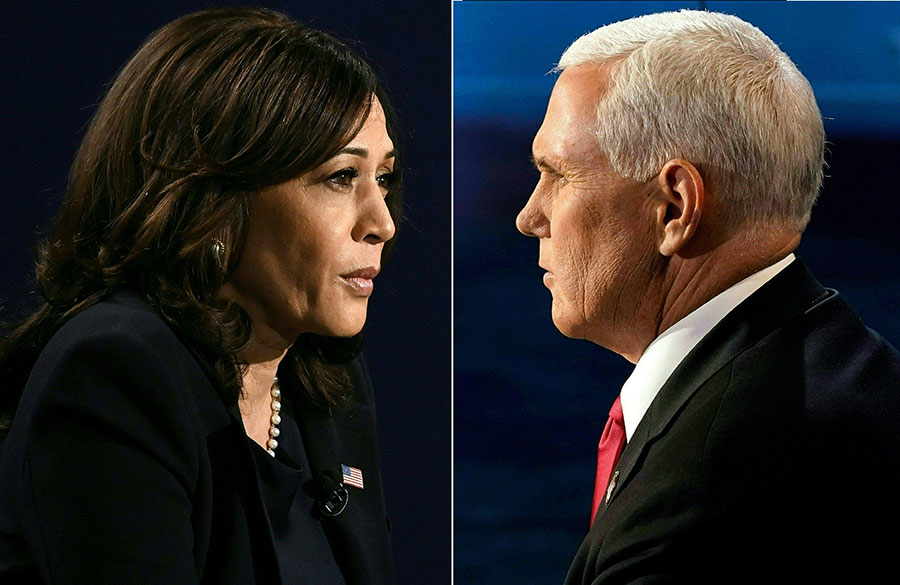 Debate night: Sen. Kamala Harris' repeated attacks on the Trump administration had Vice President Mike Pence on the defence for most of the night. Photo: Morry Gash and Eric Baradat/ POOL/AFP/Getty Images

U.S. vice-presidential debates tend to be relatively low-stakes affairs, but last night’s match-up between Democratic candidate Senator Kamala Harris, 55, and sitting Republican Vice-President Mike Pence, 61, ahead of the Nov. 3 election was hardly politics as usual. There was the breathtaking sight of a woman of colour taking another step into history – with a literal seat at the table – as the first ever to debate for the second highest office in the land.

“Greatest Failure of any Presidential Administration”

Then there is the question that came up 20 minutes in when moderator Susan Page, the Washington bureau chief of USA Today, asked whether either had discussed “presidential disability” due to age and how they would address it in running mates – challenger, former vice-president Joe Biden, 78, and the incumbent president, Donald Trump, 74.

Vitality, cognitive ability, longevity – these questions are tricky on both tickets. So Harris didn’t answer. But it was a good non-answer. She pivoted to the beliefs she and Biden share. As well as establishing her biographical bona fides, she doubled down on the reasons why she is qualified to be a heartbeat away from the presidency, without actually saying so.

Biden, holding steady with masterful campaign performances since besting an unhinged Trump in the first presidential debate, has put the “senile sleepy Joe at death’s door” smear to bed – meaning Harris’ non-answer didn’t come off as a dodge.

The problem for Pence, who deflected the age question with an anodyne and irrelevant talking point, is that the issue is no longer hypothetical since Trump contracted COVID-19. Trump, as a senior, is already in a high-risk group with several co-morbidities and is being given a course of treatment, including experimental therapies (including a steroid known to alter mental states) never tried in combination before.

And if that begs the question what could possibly go wrong, look no further then Trump’s dangerous propaganda-style “proof-of-life” stunts since his diagnosis.

It’s unfortunate that Page did not press Pence, the head of the Trump administration’s Coronavirus Task Force, on this point. Or that Harris did not attack the vice-president for his presence at two super-spreader events at the end of September, one caught on camera, at the White House that flouted social distancing and mask-wearing guidelines and has led to, at last count, an outbreak of 34 coronavirus cases that may spread to thousands nationally. This includes Trump’s and the first lady’s key staff and their families, members of congress and the joint chiefs of staff as well as reporters in the White House press corps and their families.

According to those same guidelines, Pence should be in quarantine. Harris did not call this out even though his campaign mocked her for insisting on the protective plexiglass barriers they debated behind (as the Internet wildly speculated about his blood-shot eye.) But it was case closed when Harris described the government’s response to the pandemic “the greatest failure of any presidential administration in the history of our country,” leading to seven million American cases and more than 210,000 dead.

Expectations for Harris’s performance were sky high due to her oft-referenced prosecutorial chops. She did indeed ably try her case on the environment, jobs and the economy, health care, racial justice, police reform, choice and the judiciary while defending Biden’s record on hot-button issues like taxation and fracking, as well as his character, saying, “You respect the American people when you tell them the truth.”

Pence, a one-time talk radio host and spokesperson for the tobacco industry, is well versed in the dark arts of spin. An evangelical Christian, he was at his strongest when talking to the base on the topics that animate them most – filling Ruth Bader Ginsburg’s Supreme Court seat with conservative Amy Coney Barrett, declaring that he is unashamedly pro-life, and moving the American Embassy in Israel to Jerusalem.

Known for his “Dear Leader” levels of performative fealty to Trump, Pence, at times, touted a record of what can only be considered an alternate presidency while attempting to brazenly gaslight Harris. Harris made the smart call to only litigate the bigger points, like when Pence mischaracterized her record as attorney general of California as it pertained to Black men. She did not follow him down every rabbit hole, instead letting her meme-able facial expressions do the talking.

Though they are only five years apart in chronological age, the contrast between the two is generational. The new versus the old. Harris, with her Timbs and Chucks, hip-hop playlists and San Francisco swagger, represents a nascent America – multi-cultural and progressive. Joe Biden has said he will be a transitional president to the next generation, and that baton will pass to her. America has already chosen – with 60 per cent of CNN viewers declaring her the winner of last night’s debate.

Toward the end of the debate, a large black fly landed on Pence’s head and stayed there for two minutes. To some it was a hopeful portent that Trumpism will soon be relegated to the garbage heap of history.

Pence, with his shameful denial of systemic racism and Trump’s blatant stoking of racial tensions, proved himself a man out of time. He was tone deaf on gender, too.

Unlike when Biden debated Sarah Palin in the 2008 vice-presidential debate, Pence was boorish and disrespectful, constantly interrupting and speaking over both Page and Harris, in a way he did not when he debated Hillary Clinton’s running mate Tim Kaine in 2016.

Yet it only served to give Harris another opportunity to signal that the future will be female with a rejoinder she had to use too many times and immediately ascended into viral glory – “I’m speaking.”