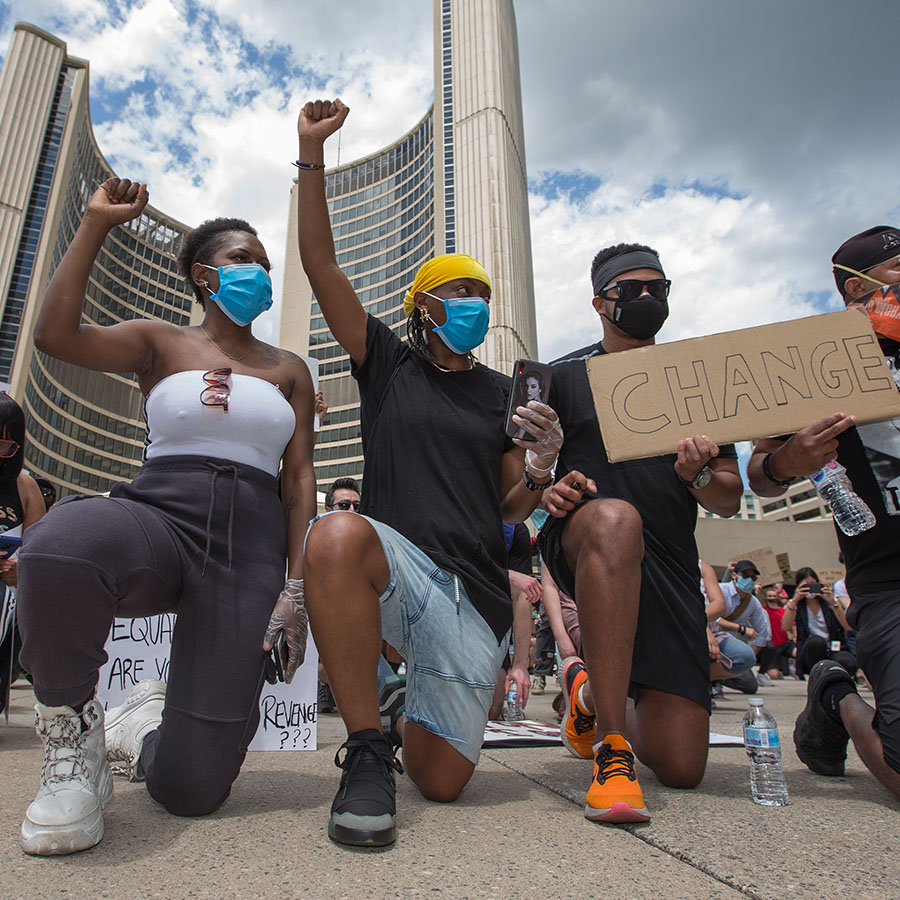 Protestors at Toronto’s City Hall take a knee before beginning their march in support of Black communities in June, 2020. Now, with Black History Month 2021 upon us, we must go beyond acknowledging the occasion and think about ways to meaningfully get involved in fighting anti-Black racism. Photo: Rick Madonik / Toronto Star via Getty Images

In 2013, the United Nations General Assembly adopted resolution 68/237, which proclaimed 2015 to 2024 to be the International Decade for People of African Descent. Not only have our leaders scarcely mentioned this proclamation, but the last twelve months — which included the police murders of unarmed Black people like George Floyd and Breonna Taylor, global anti-racism  protests and white supremacist mobs attacking the U.S. Capitol in early January — revealed just how little about the Black experience is fully acknowledged in our society.

Black History Month has become the one dedicated time of the year when people of African descent are seen, heard, and celebrated. And while it is important to know the roots of the celebration, this year we must also think about ways to meaningfully get involved in fighting anti-Black racism.

In 1926, African American historian Carter G. Woodson initiated Negro History Week in commemoration of Frederick Douglass and Abraham Lincoln — the two most instrumental figures in the 1863 Emancipation Proclamation and both of whom were born in February. Then, in 1976, to commemorate America’s bicentennial, Negro History Week became a nationally celebrated month as Black History Month.

Meanwhile, Canada’s Black History Month celebrations first began in the 1950s when the Canadian Negro Women’s Association organized events around the Caribbean carnival in Toronto. In 1978, in large part due to the efforts of the Ontario Black History Society led by Rosemary Sadlier and others, the City of Toronto recognized February as Black History Month — which it formally celebrated in 1979 and then expanded province-wide in 1993. In 1995, Black History Month was recognized nationally (and first officially observed in 1996) when the Honourable Jean Augustine brought the motion before Parliament, where it passed unanimously. That also makes 2021 the 25th anniversary of Black History Month in Canada.

Black History Month, then, is a moment to pause and recognize the contributions of Black Canadians to our national fabric. But it’s also an opportunity to engage in programming and events, contribute financially to locally operated Black heritage sites, and support Black authors and filmmakers across Canada. By doing so, you will actively participate in taking ongoing meaningful action in aid of Black communities, as well as broaden your understanding of the issues affecting Black communities — which, for example, will ensure that Black Lives Matter all year round. As well, COVID-19 has hit the Black community harder than other groups, so this year also brings pandemic-related events that call on us to be a part of a larger movement for change and equality.

Read on to learn more about how you can support Black communities and causes across Canada.

There are deeply rooted Black communities in Western Canada that you can support that are actively preserving and recuperating forgotten Black histories. Hogan’s Alley, Vancouver’s first concentrated Black community in the Strathcona neighbourhood — that was levelled in the 1960s to construct a freeway — is one example. Today, the Hogan’s Alley Society (HAS) is a non-profit organization working to not only preserve Black history in Vancouver and throughout British Columbia but also to acquire and develop land and assets that will foster Black community. Here, you can learn more about HAS and donate to help keep the memory of Hogan’s Alley alive.

In 2017, meanwhile, Alberta became only the fourth province to officially recognize Black History Month. This year, for the first time, Ubuntu, a Central Alberta-based organization is holding a Black History Month Celebration. The event will also celebrate local Black creatives, including a Youth Art Contest, which will be showcased at the Red Deer Museum and Art Gallery, offering an opportunity to learn more about Ubantu and support Black history education in Alberta.

Black History is deeply rooted in communities across Ontario, from Windsor-Sussex to Grey County. The Chatham-Kent region in the southwestern part of the province has institutions such as The Buxton Museum, The Black Mecca Museum — which is operated by the Chatham-Kent Black Historical Society — and The Uncle Tom’s Cabin Historic Site, which marks the location of the Black settlement founded there in 1841 by Rev. Josiah Henson, a formerly enslaved man who is also the first Black person to appear on a Canadian stamp.

Without the support of the public, many of these community-based organizations will not exist. In addition to donations, you can go on virtual tours, purchase items from their websites, and attend speaker events online, such as The Ontario Black History Society’s event on February 9 featuring director/author Cheryl Foggo and Book of Negroes author Lawrence Hill.

As part of the 30th anniversary of their own Black History Month celebrations, the Borough of LaSalle in Montreal is hosting virtual events in French, including talks and readings, musical presentations, a dance workshop and artist presentations. At McGill University there are also month-long events in both English and French that include discussions of Black mental health, food, and culture. It is worth checking out the work of local Quebec photographer, Karene-Isabelle Jean-Baptiste, who has been documenting the experiences and struggles of Black women healthcare workers during COVID-19, many of whom have not received much attention.

In Nova Scotia, February is known as African Heritage Month, and it is an acknowledgement that African Nova Scotians are a unique community that can trace their lineage back to before the War of 1812. The African Heritage Month Information Network (AHMIN) produces a commemorative poster each year that you can purchase on their website to help support African Nova Scotian organizations. You can also read Stephen Davidson’s book Black Loyalists in New Brunswick (2020), which uncovers an aspect of Black history in Canada that has received little attention.

Black Athletes Have a Rich History of Activism, But Current Protests Are Taking it to a Whole New Level