The Atlanta Attacks Were Not Just Racist and Misogynist, They Painfully Reflect the Society We Live In 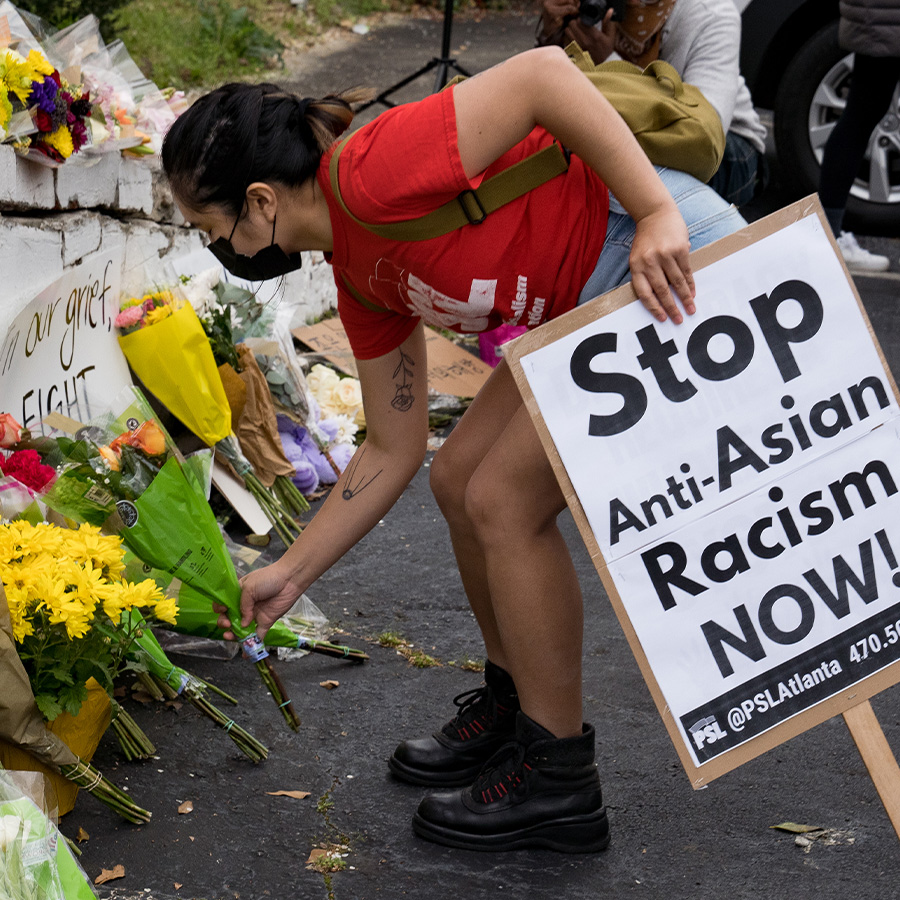 Jamie Chai Yun Liew, an associate professor in the faculty of Law at the University of Ottawa, says the women killed in the Atlanta shooting last week were targeted not only because of their race and gender but also their perceived work and immigration status. Photo: Megan Varner/Stringer/Getty Images

I am heartbroken but I’m not surprised.

The targeted killing of eight women in Atlanta, six of them Asian, is a brutal result of decades-long exclusion and oppression, legitimized in law and colonial reverberations, that allow a white-dominated settler society to thrive, justifying differential treatment of racialized migrants.

Let’s Unpack This a Bit

Many blame former U.S. president Donald Trump for calling COVID-19 the “Asian flu,” “Kung Flu” and “China Virus,” among other terms, for this increase in violent attacks and harassment. And while it’s certainly contributed, these violent attacks, harassment and hate expressed against people of Asian descent did not begin with Trump or the pandemic.

Here is where the toolkit built by critical race and feminist theorists can help us understand that the tragic deaths of these women are not new, not isolated, but represent racist, misogynist violence and are reflective of the society we live in.

In other words, they were targeted because of their intersectional identities.

The Intersectionality of Identities

Women were killed. It is undeniable that violence against women is one of the leading causes of death of women around the world. The Canadian Femicide Observatory recently confirmed that 160 women and girls were killed by violence in Canada in 2020, with 90 per cent of the incidents involving a male accused.

Six of the eight women in Atlanta were Asian. We’ve seen a significant increase in violence against Asians during the pandemic. In the United States, according to Stop AAPI Hate, 3,800 incidents were reported during the pandemic, with 68 per cent of them being reported by women.

This is a 150 per cent increase in the number of hate incidents against Asians — and Canada is not immune. Per capita, Canada has a greater number of incidents reported than the United States. According to Fight COVID Racism, there have been 928 incidents of violence due to discrimination against Asians since the pandemic began.

Tied to this is the perceived immigration or citizenship status of Asians in North America. Immigration status has long been used as a way to separate and exclude racialized people in the post-colonial project of preserving a white-dominated settler society.

The 1923 Chinese Exclusion Act was designed to keep racialized persons from settling in Canada. It was also designed to keep the “Yellow Peril” out, and for 24 years provided a mechanism to conduct health examinations based on misunderstandings that such persons were contagions.

This early identification of “foreigners with disease” has framed our current discourse.

While history tells us how North Americans may have come to fear Asian people and how Asians have been and still are perceived as vectors of disease, our current laws continue to justify differential treatment of racialized migrants.

Migrant essential workers in agriculture, caregiving, health care, meat processing and other sectors come to Canada with temporary residence status without their families. Because of their precarious immigration status, they are subject to abuse, long working hours and the withholding of pay, all with little legal protection or recourse.

During the pandemic, they have been blamed for COVID-19 outbreaks despite risking their lives to care for our young and sick and to put food on our tables. These migrant workers are predominantly racialized and are given different treatment than other “higher” skilled workers in industries where permanent residence and family reunification are available.

Finally, we should not ignore the perception that the women killed are being seen as sex workers. Although lawmakers in Atlanta say there is no evidence that those killed were sex workers, the shooter — and in turn, some media outlets — perceive them to be. Sex work has long been viewed, in North America, as immoral, unclean and dangerous, and laws were enacted to criminalize it.

In Canada, as the Supreme Court recognized the harms and unconstitutionality of laws that criminalize sex workers and their workplaces, the federal government introduced new laws purported to target women assumed to be exploited. Current policy and legal approaches focus on police and law enforcement to conduct raids and investigation of sex work establishments in the name of anti-trafficking — subjecting sex workers to surveillance, harassment, detention and deportation.

Migrant sex workers are therefore not only criminalized, but subject to precarious immigration status because sex work is not recognized as work that one could obtain a work permit for. It can also be identified as a reason to render someone inadmissible to Canada on criminal grounds.

Weave this in with the fetishization of Asian women and how they are viewed as disposable objects and the normative message our laws send. All this allows people to think it is OK to treat migrant sex workers violently and inhumanely.

In trying to make sense of what happened, it’s important to see the tragedy as more than just violence against women and anti-Asian hate.

If you think this is confined to the U.S., think again. One need only look at our farms, health-care facilities, places of worship, borders and prisons to see how racialized people suffer because of their perceived immigration status, religion, race, gender and work.

Don’t let the model minority myth that Asians are the “desirable … non-threatening person of colour” be used to hide the systemic racism that is experienced by Asians and other marginalized people in our community.

If you are feeling powerless, there is something you can do. Support grassroots, community-led organizations like SWANVancouver, Butterfly: Asian and migrant sex workers network, Asian Canadian Women’s Alliance and the Migrant Workers Alliance for Change.

Jamie Chai Yun Liew is an Associate Professor in the Faculty of Law at the L’Université d’Ottawa/University of Ottawa. This article is republished from The Conversation under a Creative Commons license.