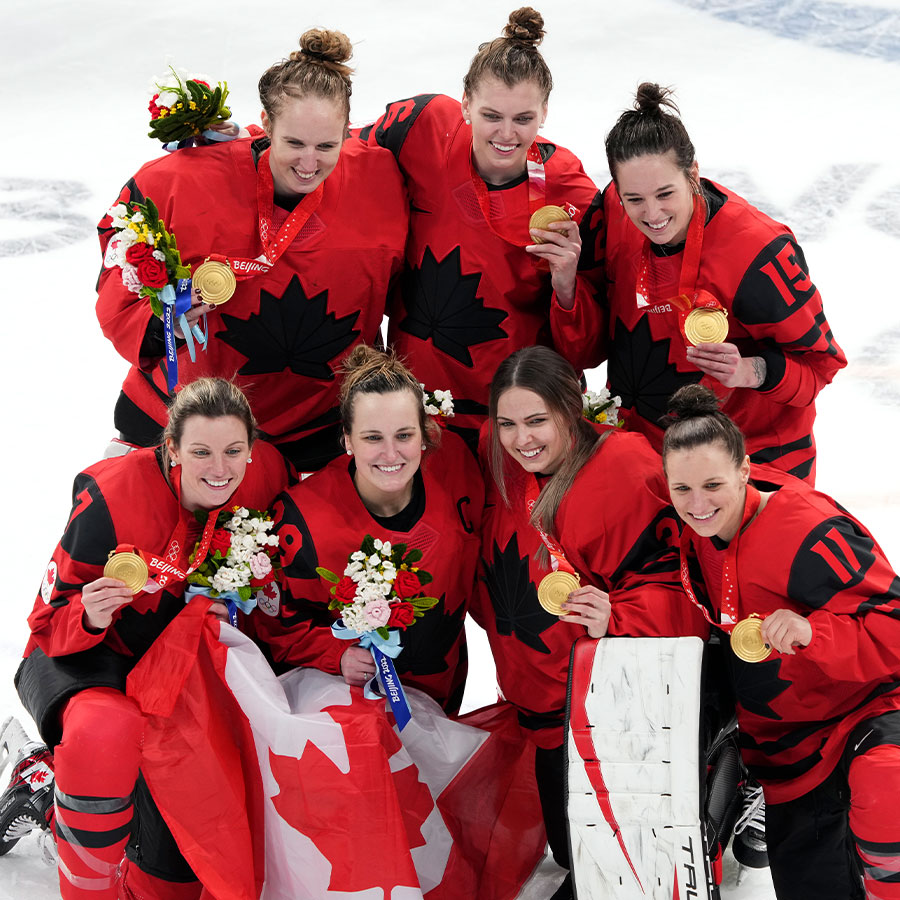 Canada turned four years of bitter disappointment into triumph on Thursday, downing arch-rivals the United States 3-2 to win the Olympic women’s ice hockey final and reclaim the gold medal the Americans took from them in Pyeongchang.

Captain Marie-Philip Poulin scored the winning goal, a rebound in the second period, as an outgunned U.S. team recorded 40 shots on goal to Canada’s 21 but were unable to convert where it counted.

“There is some angel up there. This group makes things easy celebrating each other’s success being on the same page, one team,” Poulin said.

“Since 2018 we have been putting in the work and to be honest, to be rewarded with that gold medal today, was all worth it.”

Forward Hannah Brandt nearly got the U.S. on the board in the first three minutes with a wrist shot that ricocheted off the post and a Canada effort was ruled out for offside.

Sarah Nurse put Canada ahead and Poulin added to the advantage 15 minutes into the first period, stealing the puck and whipping it past American netminder Alex Cavallini.

She produced the game-winner midway through the second frame with a rebound off Cavallini’s pads.

Four-times Olympian Hilary Knight got the Americans on the board with a shorthanded effort and Amanda Kessel converted on a powerplay with 13 seconds to go in the third period after the U.S. pulled their goalie to bring the contest to a nail-biting conclusion.

The Canadians celebrated wildly, throwing their gloves in the air and mobbing each other having earned sweet redemption four years after the Americans ended their run of four straight golds in a devastating shootout loss.

“I got shivers, 2018 was hard, very, very hard,” said Poulin. “When you take some time to reflect what you need to do better as a group it really pays off. When you surround yourself with good people, good things happen.”

Nurse made history with the most points and assists in a women’s Olympic tournament, while Poulin – nicknamed “Captain Clutch” – ended up as Beijing’s second highest scorer.

It was a devastating blow to the Americans, who also lost to Canada in last year’s world championship.

“We were never going to give up and I knew that and we believed that right to the very end,” said assistant captain Lee Stecklein.

“We always believed we could do it – if they had three, we were going to find a way to get four and we believed that until the very end.”

Victory capped a dominant tournament for the Canadians, who did not lose a game, recorded an 11-0 shutout over Sweden in the quarter-finals and routed Switzerland 10-3 win in the semis.

They finished third at the 2019 world championship, missing the final for the first time since the event was introduced in 1990, and made winning the Olympics their top priority.

“We had a team slogan that was called ‘impact the red’,” said Natalie Spooner, who recorded three goals and seven assists across the tournament.

“It was impacting those days when we weren’t able to be together, making sure we were improving as individuals and as a team also.”

The U.S. had a hint of the trouble to come in Beijing after losing to Canada 4-2 in the preliminary round, despite putting up 53 shots on goal to 27 from their opponents.

They lost star forward Brianna Decker to injury early in the first game and struggled to convert powerplay opportunities.

“There was a lot of adversity. There’s a handful of us that almost didn’t make it over here (to start with) because of COVID, and with goaltenders out, and then to lose your top player (Decker),” said Kessel.

“She’s unbelievable and to lose her definitely hurt our team.”

The teams will get a chance to renew their rivalry when the 2022 world championship starts in August.

Looking Back at Canada and the U.S.’s Bitter Olympic Rivalry in Women’s Hockey