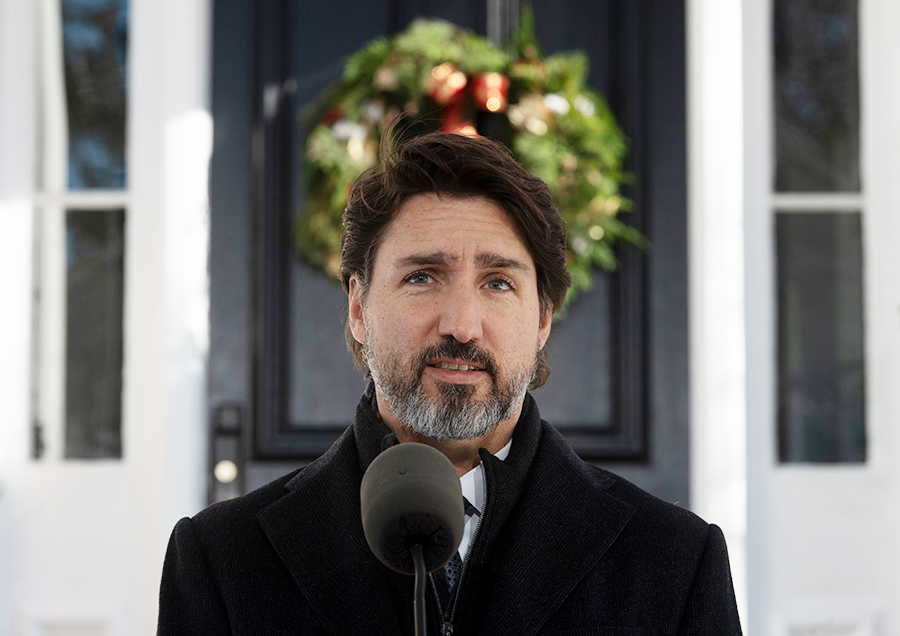 At a press conference outside Rideau Cottage on Tuesday, Prime Minister Justin Trudeau was unable to pinpoint a date for the roll out of a COVID-19 vaccine. Photo: The Canadian Press/Adrian Wyld

Prime Minister Justin Trudeau today repeatedly dodged questions from reporters about when any one of the promising new COVID-19 vaccines would become available in Canada, claiming it’s “premature” to begin discussing firm dates.

Speaking on the snowy steps of Rideau Cottage at his daily media briefing, Trudeau noted that the buzz around the latest scientific breakthroughs means, “Everyone is rightly focused on vaccines.” And he said that as multiple vaccines make their way through the approval process, Canadians “have reason to be hopeful because without the vaccine, we don’t get through this pandemic.”

But while the promise that a COVID-19 vaccine is on the horizon is indeed good news for a country whose economy has been battered by repeated shutdowns and whose citizens are growing weary of following government-imposed health restrictions, Trudeau refused to pinpoint when the doses will be available here in Canada.

“We’re expecting to start receiving those doses in the first few months of 2021,” he said vaguely. And while assuring us that the government is “looking forward to being able to vaccinate Canadians in the coming months,” he refused to offer a more specific date.

“It is premature to start circling a date on the calendar,” he said, urging Canadians not to abandon following public health measures just yet. “Because there’s still a lot of work to do between now and then. We’ll be ready when the vaccine is ready.”

While the U.S. and European countries are already planning to begin rolling out inoculation campaigns as early as December, Canada’s own campaign could lag months behind.

The prime minister blamed this on the fact that we simply don’t have the “domestic production capacity” to manufacture the vaccine on our own soil. “We recognize the disadvantage Canada has of not having a domestic pharmaceutical industry capable of making the vaccines,” he said.

And he acknowledged that countries that have the pharmaceutical manufacturing capacity to quickly ramp up production of the vaccine will be able to access the vaccine long before Canada does. “The United States, Germany and the U.K. do have domestic pharmaceutical facilities, which is why they’re obviously going to prioritize helping their citizens first,” he said.

To overcome our manufacturing disadvantage, Trudeau asserted that Canada has signed a “range of agreements” with seven vaccine manufacturers (including the three most promising vaccines offered by Pfizer, Moderna and AstraZeneca) to procure more than 350 million doses. And once the doses get the go-ahead from Health Canada regulators, he said, it’s just a matter of waiting for shipments to arrive.

However, that could take some time. And Trudeau again and again refused to make any rash predictions on when the first doses will begin flowing in.

Trudeau said the federal government is already “working with a number of partners, including the Canadian military, to ensure that when the vaccines arrive, and are deemed safe, they will be distributed to Canadians.

“We’re making sure we have the plan in place to move as quickly as possible,” said Trudeau. In other words, a vaccine is coming but until it arrives, Canadians are going to just have to practise a little more patience.