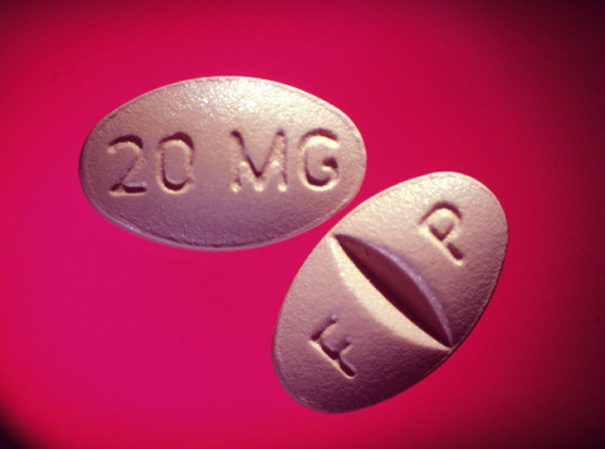 Celexa, the brand name of the commonly prescribed antidepressant citalopram, can reduce production of the main ingredient in Alzheimer’s brain plaques, say researchers at Washington University and the University of Pennsylvania.

The findings, in mice and people, were published in the journal Science Translational Medicine.

Brain plaques are linked with the memory problems and other cognitive impairments of Alzheimer’s disease. Scientists believe that stopping plaque buildup may halt the mental decline caused by the disorder.

The scientists found that the anti-depressant stopped the growth of plaques in a mouse model of Alzheimer’s disease.

And in young adults who were cognitively healthy, a single dose of the antidepressant lowered by 37 percent the production of amyloid beta, the primary ingredient in plaques.

Although the findings are encouraging, the scientists caution that it would be premature for people to take antidepressants solely to slow the development of Alzheimer’s disease.
“Antidepressants appear to be significantly reducing amyloid beta production, and that’s exciting,” said study author John Cirrito.

“But while antidepressants generally are well tolerated, they have risks and side effects. Until we can more definitively prove that these drugs help slow or stop Alzheimer’s in humans, the risks aren’t worth it. There is still much more work to do.”

Amyloid beta is a protein produced by normal brain activity. Levels of this protein rise in the brains of patients with Alzheimer’s, causing it to clump together into plaques.

Most antidepressants keep serotonin circulating in the brain, so this led researchers to wonder whether the drugs block the increase of amyloid beta levels and slow the progression of Alzheimer’s.

In 2011, the researchers tested several antidepressants in young mice genetically altered to develop Alzheimer’s disease as they aged.

In these mice, which had not yet developed brain plaques, antidepressants reduced amyloid beta production by an average of 25 per cent after 24 hours.

For the new study, the growth of Alzheimer’s-like plaques in mice given citalopram were tracked for 28 days. Giving the mice the antidepressant stopped the growth of existing plaques and reduced the formation of new plaques by 78 per cent.

In a second experiment, the scientists gave a single dose of citalopram to 23 people ages 18 to 50 who were not cognitively impaired or depressed. Samples of spinal fluid taken from the participants over the next 24 hours showed a 37 per cent drop in amyloid beta production.

Now the researchers are trying to learn the molecular details of how serotonin affects amyloid beta production in mouse models.

“We also plan to study older adults who will be treated for two weeks with antidepressants,” says researcher Yvette Sheline. “If we see a drop in levels of amyloid beta in their spinal fluid after two weeks, then we will know that this beneficial reduction in amyloid beta is sustainable.”