World War One Will Always Be With Us 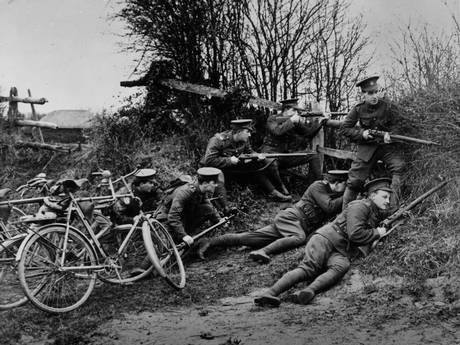 I grew up in the aftermath of World War Two, but it was World War One, the Great War, that I was aware of every day as a child on the Canadian prairie.
A blown-up sepia photograph in a substantial wood frame hung on the most prominent wall of our home. It fascinated me because it was a picture of a uniformed man posed formally on a horse, looking directly and rather severely into the camera.
The man was my Uncle Samuel, my mother’s much older half-brother.
He’d served as a veterinarian in the Canadian Army during the First World War and the photo was his official portrait.
That picture held pride of place in our home because it was proof that, although the family’s roots were in Eastern Europe and England, we were proud Canadians, proud that a family member had worn the Canadian uniform, proud of Sam’s contribution to Canada’s evolving role in the world early in the 20th century.
That picture defined and illustrated my family’s commitment to Canada and served as a visual symbol of the connection.
The Great War transformed the inhabitants of this land into Canadians.
From a colony of immigrants and refugees, it shaped a proud and potent nation.
It also shaped the world for 100 years to come — and counting.
On this 100th anniversary of Canada’s entry into the war, some of the same borders on the European continent are still in contention.
“Crimea Crisis Haunted by Ghosts of Bungled World War I Diplomacy” declared a Bloomberg headline just months ago.
Vienna, the powerful pre-war capital of the Austro-Hungarian Empire — which fell apart in the war and, like the entity of Prussia, vanished from the world stage — is now primarily a lovely, seductive museum of a city, surpassed by far in influence and importance by, of all places, Ottawa.
World War One and its conclusion, the Treaty of Versailles, determined the history of the 20th Century, leading directly, say historians, to World War Two. Countries were carved up, detached and re-attached.
My father, when asked where he was born, was never sure if he should say it was Bessarabia, Moldova, Romania, Ukraine or Russia. Because at some time during his life, it was each of those.
Of course, it wasn’t just empires and nations that suffered. Even in countries, like Canada, which emerged victorious and matured into nationhood because of the war, the losses were unbearable.
Out of a population of eight million, 630,000 Canadians enlisted. More than 60,000 died, including flying ace Billy Bishop. Because the Toronto city airport is named for him, we’re constantly and appropriately reminded of Canadian heroism and Canada’s role in the Great War and how we became a nation– just as I was always reminded when I was young of my uncle’s role in the war and how my family became Canadian.