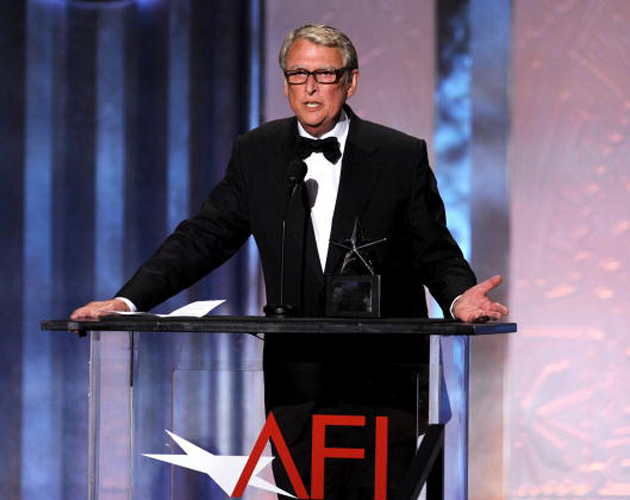 The film director Mike Nichols died suddenly today from cardiac arrest at the age of 83.
Nichols was recognized as one of the very few people on the planet who’d achieved EGOT — an Emmy, a Grammy, an Oscar and a Tony.
He’s remembered best for directing several of the late 20th century classic films, movies that were huge successes with critics and audiences alike: The Graduate, Catch-22, Who’s Afraid of Virginia Wolf, Carnal Knowledge, Silkwood, Working Girl, The Fortune.
But he was also revered as a theatre director, staging most of Neil Simon’s plays as well as plays by Chekhov, Beckett and the musicals Annie and Spamalot, for which he won two of his many Tony awards for directing.
None of these titles were what came to mind today when I heard about Nichols’ death.
My first thought was about a beer called Narragansett.
The Narragansett Brewing Company of Rhode Island was a big advertiser on radio and television in the 1960s in Boston where I lived and worked at the time.
And the commercials for Narragansett were brilliant, based on improvisations by a pair called Nichols and (Elaine) May.
Listening to those commercials in the morning made my day.
They were based on the unmatchable, classic Nichols and May improv routines, the most famous example being a phone conversation between mother and son.

Nichols began as an actor and ended as an artistic genius.
“He has an eye and an ear and a heart for the truth,” said Natalie Portman, whom he directed in Closer (2004) and The Seagull on stage. “He’ll tell you something that suddenly seems obvious but that you’d never have come up with yourself, which is probably the definition of genius.”
Mike Nichols was born Michael Igorevitch Peschkowsky in Germany and arrived in the U.S. at the age of 7, the son of a doctor who died when Michael was 9.
He had intended to become a doctor like his father but switched to comedy, then to directing.
His first production was Simon’s Barefoot In The Park in 1963 at the age of 36.
But a few years ago, he told The Hollywood Reporter, “My life began at 54.”
The Reporter explained, “At 54, he met Diane Sawyer, the then-60 Minutes correspondent (and current ABC World News anchor) who became his fourth wife. Nichols had been going through a black depression and addiction to the sedative Halcion, which a friend calls ‘just a symptom of what was going on underneath.’
“Nichols spotted Sawyer ‘on the Concorde — if you want to talk about glamorous….I had loved other women before but not like this.’ “
They celebrated their 25th wedding anniversary in April 2013.
Simon’s last film was Charlie Wilson’s War in 2007.
His most recent and last production, in 2012, was a Broadway revival of Death of a Salesman with Phllip Seymour Hoffman. Nichols, at the age of 80, won his record-breaking sixth Tony Award for directing.
He told The Hollywood Reporter, “You can’t really be satisfied, but I am pretty close to it because the cast took it and ran. They get better every day. I’ve never seen anything like that before, and I don’t know if I’ll ever see it again.
“Is my ambition sated? I don’t know. To get something right, it can’t be sated because you can’t ever get enough of it right — and even if it is right, it won’t stay right. That’s the thing about a play. But with Salesman, it’s different. I don’t know how, but they just keep getting better each night.
“I really don’t think I’ll direct another play. This is as good a time as I’ve ever had, and I don’t want to f– it up.”

5 THINGS YOU DIDN’T KNOW ABOUT NICHOLS
1)His Russian grandparents owned a Siberian gold mine.
2)His mother’s father was a famous anarchist — and philosopher Martin Buber’s best friend: “Martin came to see me in college wearing his green tweed suit in July.”
3)Theater legend Tyrone Guthrie wanted him to play Hamlet: “I said, ‘I can’t — I don’t have the voice, and I don’t know Shakespeare.’ He said, ‘Don’t you think you can pretty much do anything?’ I said, ‘No!'”
4)He quit after three days on The Sopranos: “It was a good part — I was her shrink, not his — but I was ‘acting.’ I told David Chase, ‘Forgive me, I’m the wrong Jew.’ ”
5)His grandmother wrote the libretto to Richard Strauss’ Salome: “She died when my mother was very young, but we still got royalties for years.”

(With files from The Hollywood Reporter)