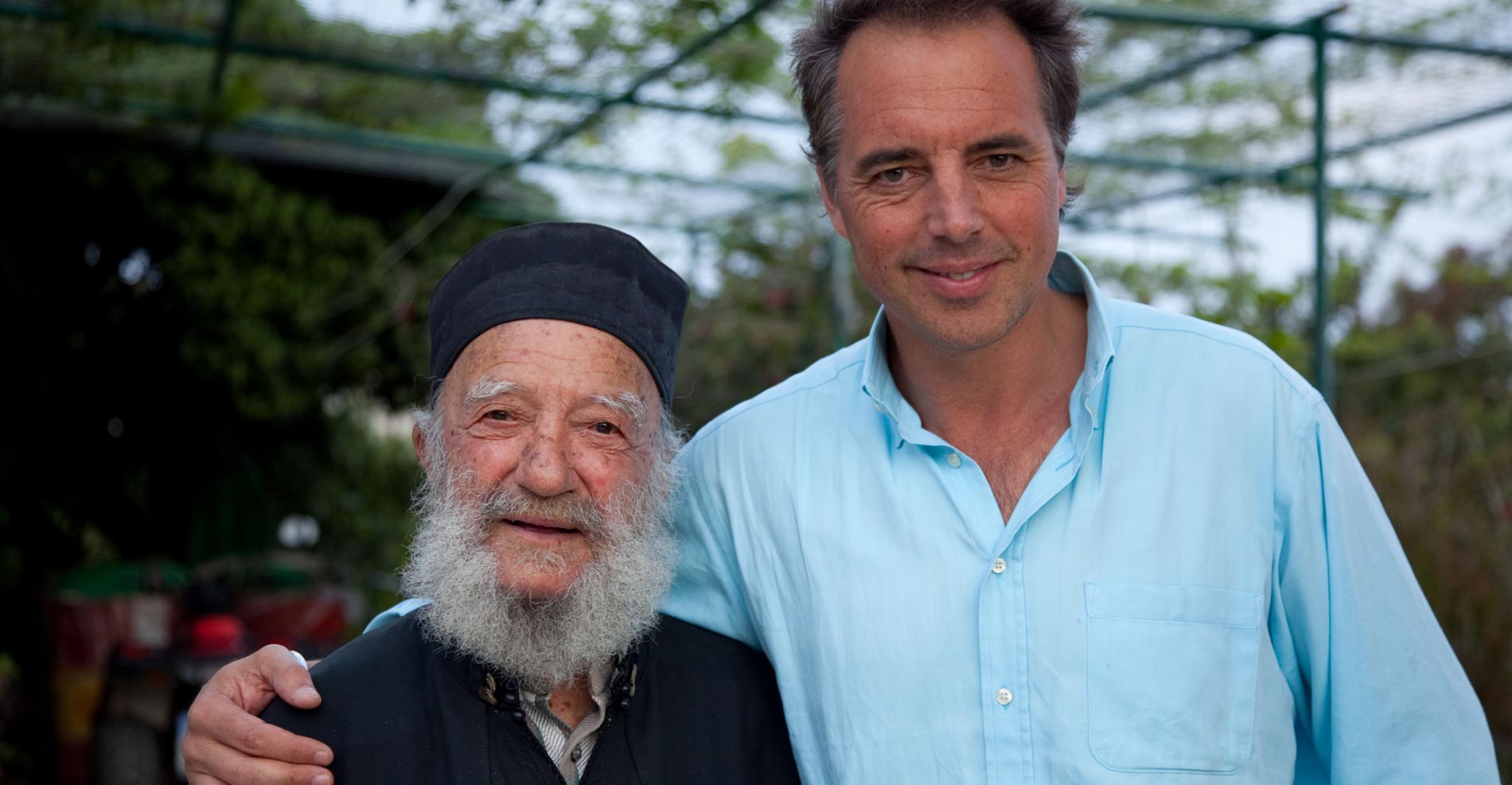 They call them the “Blue Zones” — places in the world where longevity, and happiness, thrive. So for the United Nations International Day of Happiness (March 20), we revisit our 2019 discussion with author Dan Buettner, who’s spent 30 years exploring how people in these regions live so long, the different types of happiness they enjoy, and the lessons the rest of us can glean for our own lives.

Dan Buettner’s 30-year mission in life has been to interview extremely old people about how they got to be that way.

He tapped an international super-team of academics to crunch and interpret data points to identify the world’s “longevity all-stars,” meaning centenarians who hail from places he calls Blue Zones, which are demographic hot spots of long-living communities. Then he set about distilling the best practices of these outliers into bullet point-friendly action plans for North American audiences and policy makers to replicate the happiest of conditions.

His earliest New York Times “Blue Zone” bestsellers (2008 onward) were about how to use the knowledge he has assembled to add a decade to your lifespan and a healthier one at that. His fourth book though, The Blue Zones of Happiness, takes his work deeper into the quality of our lives. He crunched a different set of data to identify the happiest places on earth. Then he grounded his message with narrative, using the stories of real (though exceptional) people to illustrate the factors, attitudes and habits that statistically add up to overall life satisfaction.

“[This book] takes a clear-eyed look at what parts of the world deliver happiness,” says Buettner. Speaking in Davos, Switzerland, at the World Economic Forum’s annual meeting this past January, Buettner condensed his message to this: “To achieve happiness, you need to ensure you have a balanced portfolio in terms of your daily emotions, purpose and life satisfaction.”

Happiness is the universal grail, a hot topic in our challenging times. There are, Buettner points out, more than 24,187 happiness titles on Google. And Dan Buettner himself is an unlikely self-help guru, for although he is a charming speaker (his TED talk has three million-plus views) and he can hobnob with Davos elites, he is more data wonk and field operative than motivational cheerleader. The 57-year-old Saint Paul, Minn., longevity expert identifies as an explorer and storyteller first, then as educator, author and public speaker.

But large-scale adventure and ambitious projects are recurring themes of his life and career. The National Geographic Fellow once dated supermodel Cheryl Tiegs before settling down with his current partner, noted California vegan and conscious-eating author Kathy Freston. He began his career as a journalist, then with his brother, Steve, he embarked on epic (and Guinness record-smashing) endurance bike trips across America, the Soviet Union and Africa while writing books and making documentaries about the experiences.

It was on assignment for National Geographic magazine in 2005 (based on earlier research funded also by the National Institute of Aging at University of Minnesota) that he identified areas, which he dubbed Blue Zones, where people live unusually long (and, more importantly, healthy) lives. These included Sardinia, Okinawa and Loma Linda (in California, this last among a community of Seventh Day Adventists). Later work added notably aged communities in Monterrey, Nuevo Leon in Mexico, as well as the Nicoya Peninsula in Costa Rica and the island of Ikaria in Greece.

The happiness research zeroed in on a trio of new Blue Zones. He zoomed in again on family-focused Costa Rica, as well as outdoorsy Denmark, a land of social safety net plenty and the surprise inclusion of prosperous Singapore, proving money can make (some) people happy. “This book is a manifestation of my purpose for 30 years as an explorer,” says Buettner. “I go out and find things and bring back something that matters to others. At National Geographic, we developed an expertise in identifying extraordinary populations, then reverse engineering the lessons these people can teach us.”

You can’t measure happiness, of course, but Buettner sure tried. He says he asked people about life satisfaction, as well as more “discreet” questions about how often in a day one smiles, laughs or feels joy. Next comes sense of purpose, determined by whether one learns something new every day, or has used their strengths within the past week.

From there, Buettner advises doing “statistically driven things to optimize your environment so you’re more likely to be happy for the long term.” For instance, people who live near water are 10 per cent more likely to be happy. Medium-sized cities beat out large cities and small towns for happiness-inducing environments. Sidewalks and bike paths, financial security, affordable health care, a plant-heavy diet, work you enjoy that fuels a sense of purpose are all pro-happy factors. And, perhaps most importantly, spending up to six hours a day socializing at work and play has been determined as a critical element, along with a supportive community, to finding bliss. And, no, says Buettner, Facebook friends don’t count.

So what more, specifically, can we learn from Costa Rica, Denmark and Singapore? That long-term environmental conditions are key. Buettner is not a fan of the North American quick-fix scheme. “Trying to change behaviour to achieve health and happiness is usually a recipe for neurosis. No diet, pill, pop psychology lasts,” he says. “After six to nine months, you lose focus and discipline. Our brains are hard-wired for novelty. It’s our environment that shapes our lives for happiness and health and living a long time. Our environment shapes our attitudes and daily habits.”

There are three main kinds of happiness, he says. Costa Ricans, says Buettner, demonstrate “positive affect.” The Central American country is notable in the region because it never developed a class system where a powerful few owned most of the land. Thus the small farmers were free to elect politicians who placed education, clean water and accessible health care as top priorities. In Costa Rican society, the extended family is the glue that holds things together, a sense of security in well-being that enables happiness. Generosity of spirit also flows from that naturally.

Denmark, he says, represents eudaimonia, he says, a Greek concept that stems from Aristotle, who spoke of living a life of meaning. “Danish society, it seems, encourages the kind of balance between engaging work and rewarding play that results in a sense of time described as flow,” wrote Buettner in a National Geographic excerpt on the subject. The Scandinavian happiness hot spot is notable because the environment encourages activity (swimming, biking, hiking) and the government takes care of education, health care and a financial safety net so its citizens are free to concentrate on growth. Buettner cites the fact that “more than 90 per cent of Danes belong to a club or an association – from cold-water swimmers to rabbit breeders – and more than 40 per cent volunteer for civic groups.”

And the unique factors that shaped Singapore led to a high-level of self-reported “life satisfaction.” These are some of the things we have traditionally been told “can’t buy happiness,” says Buettner. The city-state island may have strict laws, he points out, but it also places value on harmony, respect and hard work. There is a guaranteed living wage and workfare programs with housing, education and health benefits. Because of these and the fact religious freedoms are guaranteed effectively, there are no “ghettos” on the island. He also points to the bonds forged by compulsory military service, which unites the disparate ethnic groups into a common sense of purpose.

Buettner then moves his book into traditional self-help mode, detailing how to translate these factors into concrete changes in one’s own environment – from shoring up finances to efficient home design and downscaling of our stuff and things, plus changing the dynamic of workplaces and emphasizing social networks.

And though Canada doesn’t star in this happiness guide, Buettner is a big fan of our shores. According to the World Happiness Report Canada ranks No. 7. “Canada is a rock star when it comes to happiness. You do everything right,” he says. “You have enlightened leaders who have rightly identified universal health care as important. Equality and trust is highly correlated with healthy life expectancy.” He gushes also about our great access to green spaces, quality of air and bike-ability in places such as Vancouver. “The rest of the world is looking to Canada.”

One of Buettner’s key collaborators is a Canadian economist named John Helliwell, “a terrific guy and probably under-celebrated,” he says. Helliwell is a happiness researcher and founding editor of the World Happiness Report, as well as professor emeritus at UBC. As Buettner writes in his book, Helliwell lives part of his year “off the grid” with his family on B.C.’s Hornby Island, practising what he has learned.

A Helliwell study that was included in Buettner’s book used our wealth of immigrant stories to test a hypothesis about happiness “set point,” the idea that we are born with a certain level of happiness, much like the set point of body weight, that we naturally return to.

“Remarkably, John and his colleagues discovered that no matter where they came from, within just a few years of arriving in Canada, [immigrants] reported happiness levels close to those of their newly adopted home – no matter their class, gender, age or profession.” Canadians typically self-report an 8.1 on a happiness rating between one and 10.

So, we can be chuffed we are doing well enough to pass our good happiness habits on to the newest Canadians, but that isn’t to say we couldn’t take a sense of purpose and belonging from Denmark, and more family bonding like the Costa Ricans. Or even indulge in life satisfaction in the form of a new car, like a cheerful Singaporean tycoon.

This story was originally published in April 2019.

The Connection Between Gardening and Happiness