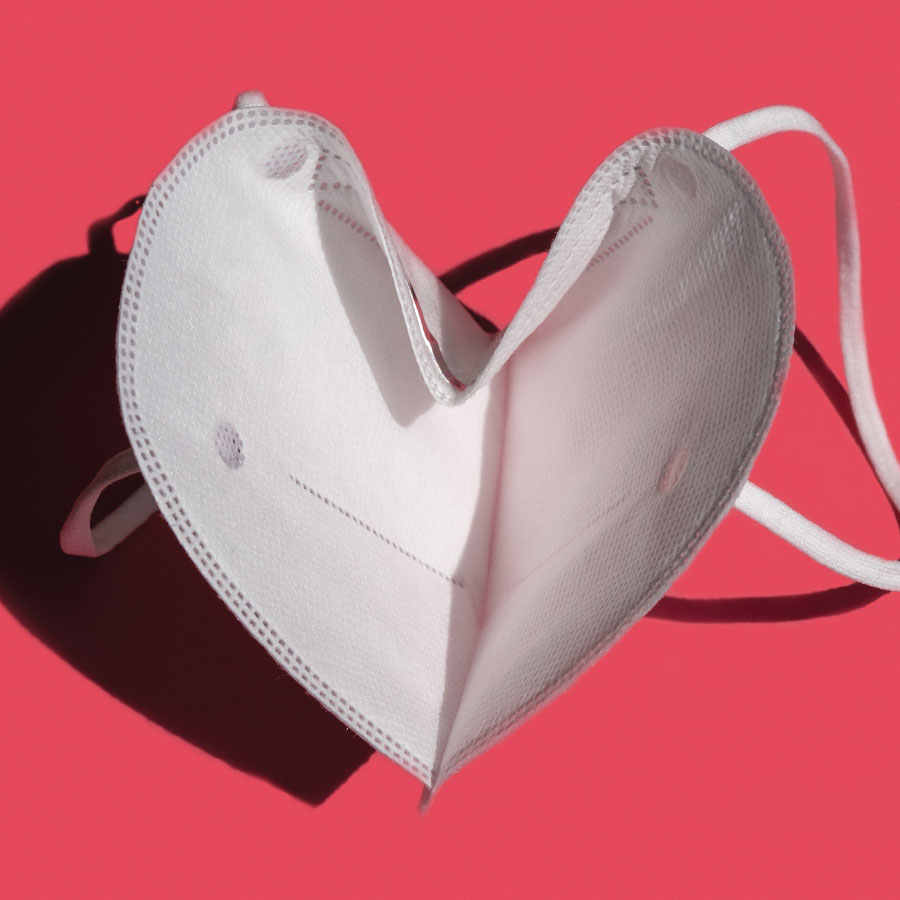 Colin Kingsmill, 55, likens the isolation of COVID-19 to the movie Groundhog Day. The former realtor, now a life coach, spent the last year and a half at the holiday home he shares with his husband, interior designer Pieter de Bruin, 52, in the Tuscan countryside. It may sound idyllic, but when the world shut down in March 2020, the couple — together for 30 years and married for 10 — found the seclusion, other than short excursions to the nearest town for supplies, a challenge.

“Just the two of us in the hills for months on end,” says Kingsmill. “The isolation was dystopian.”

Working from home, the couple’s patience diminishing by the day, Kingsmill and de Bruin knew it was important to give each other space. But that didn’t cure the tedium, which resulted in silence at breakfast, lunch and dinner. “By the end, we couldn’t even watch a movie together and became entrenched in our Audible [book] worlds,” Kingsmill says. “Romance was a distant memory. The only thing we did together was grocery shop surrounded by dramatically stressed-out Italians.”

De Bruin has a less bleak outlook on the lockdown. “Who do you imagine cooked those fabulous meals while he was on Zoom all day? I was having a great time being creative in the kitchen. I thought the silence over the table was an exercise in mindfulness, while appreciating my latest culinary experiment.”

It’s said that perspective is everything, but as we fumbled our way through a deadly pandemic that has dragged on for almost 19 months, confinement with our closest companions meant relationships were either enriched — or exhausted — by the challenge.

“The usual ways of relieving tension — friends, spas, travel, the gym, nights out — were unavailable,” says therapist Alyson Jones, the clinical director and president of Vancouver’s Alyson Jones & Associates. “For relationships already under stress, the cracks were greatly amplified. Conversely, relationships that were working well, thrived.”

Jones says her clinic — with eight staff members who specialize in family, couples and divorce counselling — has never been busier. As the team handled a “significant increase in relationship breakdowns,” Jones observed that coping mechanisms among heterosexual unions diverged along gender lines. Women were taking the pandemic more seriously and being more focused on health issues, supportive of safety measures, and proactive about seeking social connections to support them.

Women also took on most of the burden of unpaid care and domestic tasks, with a June 2020 Oxfam survey of 1,523 Canadians showing 42 per cent of women reported an increase in unpaid care and domestic work, compared to 36 per cent of men. And an October 2020 Ipsos poll of more than 14,000 people in 16 countries for UN Women suggested a good chunk of their time was devoted to child care, with Canadian women reporting they spent, on average, 27 hours a week looking after the kids, compared to 15.8 for men — likely because mom did most of the home-schooling.

A December 2020 Statistics Canada report from an online survey of 970 parents that summer confirmed educating the kids was a task that most often fell to women (64 per cent) rather than to men (16 per cent), and showed perceptions were also skewed: 35 per cent of men said that home-schooling was shared equally — but only 23 per cent of women agreed.

Kate*, a 45-year-old Canadian writer based in the U.K., and her husband decided she should take the kids to the country when the schools closed, while he (deemed an “essential worker”) stayed in town and continued to go into the office.

“I rented a cottage three hours from the city. We figured it would be a few weeks but it ended up being three months. I felt resentful that I’d put my work completely on hold to devote myself to child care.” Kate quickly gave up on home-schooling and started taking the kids on long walks, teaching them the names of butterflies, birds and flowers, and calling it “outdoor education.”

What the couple hadn’t thought through was the impact of the forced separation on their relationship. “My husband felt lonely and isolated in the city. He missed us. But reunited back in town, the boredom was punctuated by emotional drama.” They squabbled over things that wouldn’t normally irk them, and Kate thought, at times, they might split up. “It strained our marriage to the breaking point, but we got through it and came out stronger. It forced us to figure out how to ‘rub along,’ as the British say.”

Given employment and money woes, and the difficulty of finding a new home during a contagion, unions that didn’t come out stronger forced a lot of people to tough it out indefinitely under the same roof.

“Many people didn’t have the option of moving out, even if the relationship was over,” says Jones, the Vancouver therapist. “We helped them establish ground rules and assisted with conflict resolution. They needed practical parameters as to how they could live together while they figured it out.”

That’s right, the opposite of being single is not, by default, a brilliant love affair. Sometimes it’s just exhausting emotional drama. As much as the attached are wont to feel smug pity for society’s singletons, rest assured many solo Canadians were only too happy to sidestep 19 months of COVID-19 stress and cabin fever with a less than ideal partner or, worse, endure a pandemic breakup, trapped in a living arrangement they were unable to escape.

“Luckily, I’m a person who enjoys her own company,” says Suzan Laidlaw, who is single, retired and in her 70s. “As long as I had a good novel, I was fine. I had my bubble, a few close friends, my daughter, I’d Zoom my sister in Hong Kong, chat at a distance with the neighbours. I missed hair salons, pedicures, yoga classes and laps in the gym pool but, really, my only major panic was when I realized the libraries were closed and I had only eight unread books.”

Her sanguine outlook was prompted, in part, by her childhood in Vancouver, where she grew up in the ’40s before vaccines were developed for common childhood diseases.

“The only thing that changed around our house for a couple of years was the colour of the quarantine sign on the front door as I went through measles, mumps, scarlet fever, chicken pox and whooping cough,” Laidlaw remembers. People were terrified of catching polio, and all the beaches were closed.

“They had no idea how it spread or any hope of a cure,” she says. “So, early on, I got quite used to being on my own for long stretches of time. Good practice for the COVID restrictions.” The true romantic winners were those who had the superb timing to fall madly in love during the pandemic. What better way to idle away countless months trapped inside than in the throes of a grand new romance?

Caroline, a 42-year-old content strategist, who didn’t want to use her last name, clicked immediately with a 41-year-old tech exec when they met on Tinder in January 2020. They went on three dates in one week.

At their first meeting over a glass of wine, there was great banter and a fast connection. “We both knew it was something worth exploring,” she says. “We spent as much time as we could together. Within two months, we’d been to Miami, Argentina and Uruguay, trips we were lucky to get in because, by April, Toronto was in full lockdown.”

It was a whirlwind courtship that, 90 days in, forced the new couple to make a big decision — live together or don’t see each other. They decided they were all in.

“We’d spend weekdays in his downtown condo and weekends at my west-end loft. We didn’t get the luxury of eventually learning each other’s quirks, they came front and centre fast. He’s very organized and neat, has systems for things. I’m the Tasmanian devil. I had to work at keeping things orderly at his place. There were tense moments, but we make a good pair. It was just one of those situations where when you know, you know.”

The pandemic encouraged a slow burn for others. Toronto hair stylist, Bill Angst, 61, also went into it single and came out with a life partner. Acquainted for years, he and Nathan, a landscape designer in his 50s, both found themselves unattached in 2020. They began cooking for each other and having long conversations over leisurely meals that wouldn’t have been possible in their busy, pre-pandemic days.

“I wowed him with my mapo tofu,” Angst says of falling in love over a succession of Asian dishes he perfected during lockdown. Their caution around public-health restrictions meant things unfolded at a much slower pace, and it was months before they had their first kiss. “By that time,” says Angst, “we were really great friends.”

But long-haulers Kingsmill and de Bruin — who, three decades in, had the friendship part down — missed regular breaks from each other that used to keep the conversation flowing.

“Having just had my first solo mini-break away in nearly a year,” says de Bruin, “I’m pleased to say that when we were reunited, over fish soup and a fine Croatian wine, we talked each other’s ears off for hours.”

*Name changed to protect the privacy of the subject.

A version this article appeared in the Oct/Nov 2021 issue with the headline “Love in the Time of Covid,” p. 66.

From Black Death to COVID-19, Pandemics Have Always Pushed People to Honour Death and Celebrate Life