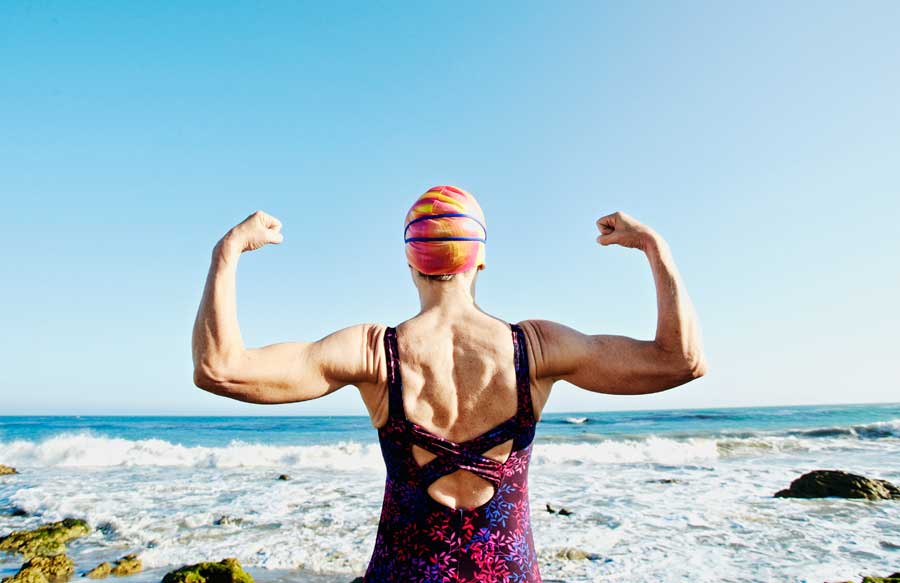 According to Parkinson’s Canada, more than 100,000 Canadians live with the neurological disease and 25 more are diagnosed every day. Photo: Peathegee Inc/Getty Images

To mark World Parkinson’s Month, we revisit award-winning writer Julie Enfield’s account of living with and becoming an advocate for the world’s fastest growing neurological disease. From diagnosis to disclosure to finding ways to live better — including the latest research on how exercise, diet and even gut health can help — hers is an inspiring journey.

There was something about the cracked vinyl chair where I sat and the empty grey eyes of the staff neurologist at St. Michael’s Hospital in Toronto that told me I was in for some bad news. Really bad news.

The windowless room was silent save for the desolate hum of a fluorescent light. The doctor leaned back in his chair. Then he dropped the bomb. “Early onset Parkinson’s,” he said flatly. “There’s no cure in sight. No cure.” His words hit me like a slab of ice against my spine.

“A miracle is always possible,” I whispered to myself, my head still spinning in disbelief. I left the hospital in a state of shock. It was a scorching hot August afternoon in 2002, and it was the darkest day of my life. After my diagnosis, I was mortified for weeks. I felt self-pity. I felt isolation. And I felt fear, a fear so deep that the mere notion of becoming one of them, one of the slouched and trembling figures whom I had encountered in the hospital waiting room was enough to paralyze me. I vowed I would never join their ranks.

Parkinson’s is a bitch. A real bitch. Without question, there are worse medical fates but still, nobody wants Parkinson’s disease (PD), an unglamorous, degenerative neurological disease that occurs when the brain stops producing the chemical messenger dopamine.

In a triumph of understatement, the medical community classifies PD as a “movement disorder” but, in reality, it can run the gamut from a slight trembling of the hand through to balance issues, slowness of movement, all the way to virtual paralysis. These dismal symptoms, I quickly learned, are caused by the death of dopamine-producing neurons in the substantia nigra, a small peanut-sized region in the centre of the brain that modulates conscious movement. What I wasn’t aware of at the time was that I would soon be spending every awake hour of my existence in an effort to downplay my neurological disarray.

I was not alone. It turns out that everyone knows someone whose life has been touched by this mysterious and unrelenting condition.

According to a recent study by UCB (a global biopharma), roughly 100,000 Canadians are currently living with PD. And that’s not all, this number is expected to double over the next two decades and, by 2050, a predicted mind-blowing 17 per cent of the world’s population will be afflicted with PD. In an aging society, Parkinson’s is everyone’s business.

My first instinct (following my diagnosis) was not to tell a soul, to keep it a secret like a wounded animal — don’t let them know your weaknesses. It wasn’t because I’m secretive by nature. It was simply because I had to buy some time. Not only did I have to reconcile myself with my new reality but I also had to think out rationally how my secret would affect those closest to me, namely my family and friends.

There are plenty of other reasons why I didn’t want my secret out. What would my boss do, for example, if my diagnosis were made public? Would I get fired on the spot? I happened to love my job in media relations for one of the world’s foremost fashion houses. (Luckily, my boss turned out to be very caring and understanding.)

But here’s the thing: not all secrets are created equal. My secret evidently kicked major ass. Yep, it was a doozy. But as any seasoned Parkie will tell you, keeping a high-calibre secret demands habitual denial, the No. 1 coping strategy used by the recently and not-so-recently diagnosed. Whether you avoid the truth by hiding your secret or by outright lying, there’s always a psychological price to be paid.

In the beginning, denial and secrecy worked for me because I had few visible symptoms. Except for a slight tremor in my right pinkie, I was healthy and fit. Then, after a few years, the levodopa (the most essential medication for Parkinson’s) began to wear off. It finally got to the point where I could no longer hide the roller coaster of side effects, which progressed to include involuntary body movements called dyskinesia.

People are not familiar with these movements. I call them the “wigglies,” and strangers will often interpret them negatively, confusing them with drunkeness or worse. Dyskinesia was a new complication and one that I had to cope with almost every day when I went out.

Around this time (2003), I was writing a book under contract for a major Canadian publisher. In fact, I finished the book and had it published to international acclaim and all the while no one at my publishers — or my literary agent for that matter — knew my secret.

I did, however, have a close call with my agent. He was the last person I thought I’d bump into after I had just been to see my neurologist at the Movement Disorders Clinic at Toronto Western Hospital, but when I stepped into the down elevator early one morning, there he was: tall, blond and inquisitive. “Funny to bump into you here,” he said. “Just visiting a friend,” I stammered as the doors slid shut. During the awkward, silent ride that followed and for the first time since my diagnosis, my body began to tremble. I got out as soon as the doors opened. “Are you all right?” he asked. I gave him a perfunctory smile and turned my back on the closing door.

When I gave up on denial, I went in the opposite direction. I opened up to my family and a handful of close friends. But I became so traumatized by talking about it, by my first admissions, that I realized I had to avoid the topic altogether. Talking about it made it too real. I started to suffer from severe anxiety attacks. I couldn’t function. I barely left my condo. When I did get out, things sometimes didn’t go well. Case in point: the Carlu.

Flashback. Fall 2008, I was invited to give a speech at a fashion gala (“Night of the Stars”) at the Carlu in downtown Toronto to an audience of the who’s who of Canada’s fashion scene. I was so distracted by performance anxiety that I forgot to take my medication. And as I neared the end of my presentation, I began to feel the inevitable crash of levodopa wearing off. I finished as gracefully as possible, left the stage and stealthily made my way to the women’s bathroom where I slipped into one of the tiny stalls, locked the door and cried for almost an hour waiting for the medication to kick in. So there I was, crumpled up in a couture gown, mascara-mingled tears streaming down my face and onto the black and white art deco tiles and thought, “What am I doing here?” Clearly, it was time to fess up.

All my disclosures were for naught. My once wide circle of colleagues who were originally so supportive gradually began to fade away until one morning I woke up and there were no more calls, no more text messages, no more evites and no one standing at the door holding flowers. With the exception of a few stalwart friends, I was alone. To make matters worse, the assisted living scenario ventured by well-intentioned family members included some pointedly distant locations, one of which was on the shores of Lake Superior. The terror of being thrown to a pack of hungry wolves on the outskirts of a small northern town began to afflict me. Still, I forged ahead.

In fact, then I did what I’ve always done when I reach an impasse in my life: I sold my condo, packed up my two cats and left town. With no precise plans for the future, I escaped to a sleepy community on the Niagara Peninsula. There’s nothing like a location makeover to jump-start a new life.

Summer 2018. I am sitting on the beach in Port Dalhousie, Ont. Storms have been stalking the lively harbour for days, and now a foreboding mass of grey clouds thrusts across the Great Lake. For hours, I have been contemplating the waves as they roll in a steady cadence. There’s a calm feeling knowing that whatever happens, rain or shine, everything is going to be okay.

Today I’m a work in progress. If I’ve learned anything over the past few years, it would have to be my ability to replace my fears with faith. Now I have a professional punching bag hanging in my garage that I use for workouts if I don’t have time to go to the gym. New research has revealed that exercise is critical to slowing the progress of Parkinson’s.

I have also changed my diet to include more nutraceuticals or, as I like to call them, “neuroceuticals” – foods rich in fisetin, resveratrol, genistein. In fact, diet and the microbiome (the ecology of bacteria in the gut) are increasingly the focus of new research into Parkinson’s. It seems the relationship between gut and brain is much more intimate than had been thought. The recent discovery that people who’ve had their appendix removed are about 20 per cent less prone to develop PD is certainly sobering.

It doesn’t end there. Neuroplasticity (the ability of brain cells to change and form new connections) has profound implications for Parkinson’s.

It turns out a stroll through the park can make a big difference. Lately, I have been inspired by the South African neuroplasticity pioneer John Pepper and his “walking cure.” Pepper has so completely overcome his symptoms that he’s stopped taking levodopa. His case has been studied by a host of neurologists, not to mention the psychiatrist Norman Doidge, author of The Brain That Changes Itself. According to Doidge, it is thought that Pepper, through his walking regime, is literally stepping into the powerful neuroplastic effects of brain-derived neurotrophic factor (BDNF). The protein, which helps the brain develop new connections, can be boosted by physical activity. Again, it seems, exercise is key.

Now I have only one thing on my mind — to walk on the other side of silence as a peaceful warrior and, if I can, as an emissary of hope.

This story was originally published online on April 11, 2019.