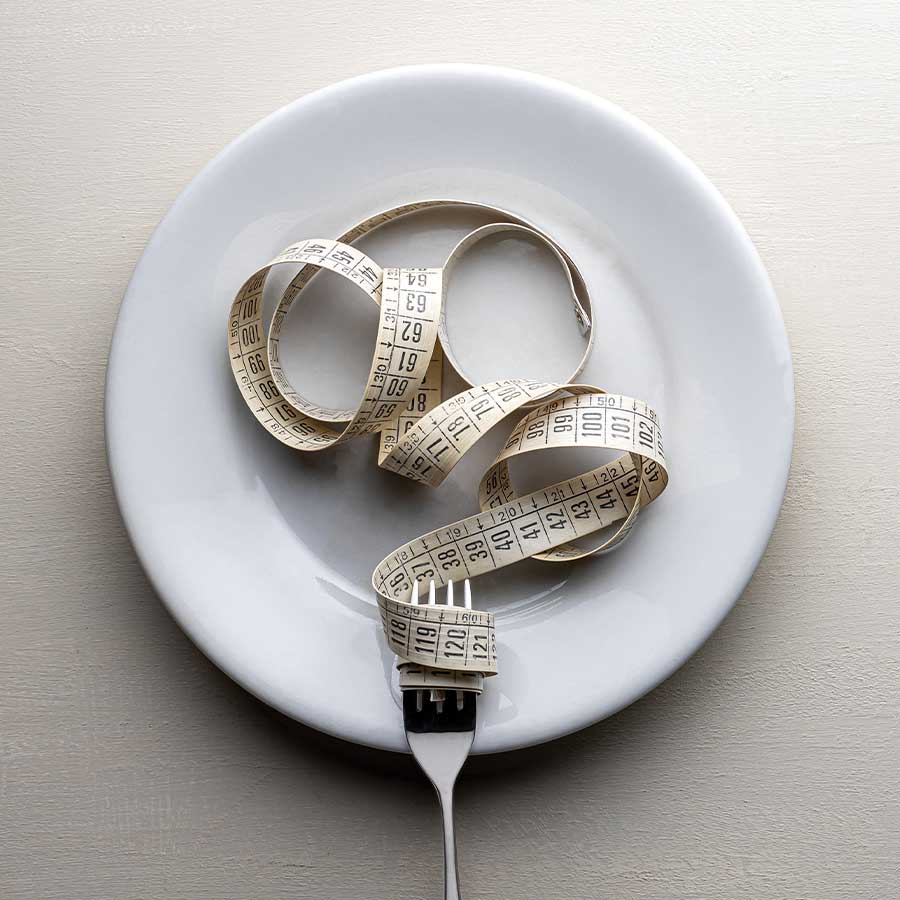 Cutting back on calories becomes more important as the decades roll by. Yet, trying to figure out how to eat is confusing. Photo: Paolo Martinez Photography/Getty Images

Many of us are familiar with the frustration of yo-yo dieting — hello, Oprah — and, as we age, it gets harder to take off the pounds and keep them off.

It’s partly because changes in the endocrine system can slow the production or processing of hormones that regulate everything from metabolism to bone and muscle mass, says Heather Keller, the Schlegel Research Chair in nutrition and aging at the University of Waterloo in Ontario. We also tend to move less, “and less movement means loss of muscle,” she says. “When we have less muscle in our body, this lowers our metabolic rate.” Strength training, also called resistance training, builds muscle.

Cutting back on calories becomes more important as the decades roll by. Yet, trying to figure out how to eat is confusing. It can feel like a perpetual war among factions, with adherents who swear by everything from Weight Watchers to intermittent fasting, the keto diet to tech apps such as Noom.

We’ll get to strategies, but first it’s important to know what’s at stake. Studies show a link between obesity and a menu of health issues, including the risk of severe illness from COVID-19, Type 2 diabetes, asthma, gallbladder disease, osteoarthritis, chronic back pain, several cancers, hypertension, stroke, congestive heart failure and coronary artery disease.

Some research suggests you can be obese and metabolically healthy — that is, your glucose and cholesterol levels and blood pressure are normal. While a body mass index (BMI) of 30 is considered obese, “BMI is mass over height, but mass includes fat, bone, water and muscle,” Keller explains. “If you have more muscle and dense bones, you might have a higher BMI.” She believes waist circumference is a helpful measure. Dietitians and bariatric doctors often use waist circumference — because it’s an indicator of abdominal fat — in conjunction with BMI to understand if there is increased risk.

Ali Zentner, the medical director of Vancouver’s Revolution Medical Clinic, which specializes in obesity and metabolic medicine, argues that how we measure obesity is a social construct and BMI was never intended to be a medical tool. “About one-third of people with BMIs above 35 are metabolically perfect,” Zentner says. “Is addressing weight important? The answer is ‘not all the time.’ A perfect example is, The Rock has obesity. Tom Cruise has obesity.”

Genetics likely plays a role because it impacts where fat is deposited. Visceral fat that surrounds organs in the waist area — the “apple” shape — sends inflammatory signals to the rest of the body, including organs, which increases the risk of heart disease, stroke and cancer. Fat under the skin, around the hips and legs — a “pear” shape — is associated with healthy obesity, but this can develop into the unhealthy kind.

Nutrition experts say much of obesity can be attributed to the fact we get more than 50 per cent of calories from ultra-processed foods, which are chock full of unhealthy fats, sugar, salt and preservatives.

Anesthesiologist Miriam Berchuk, who works at Calgary’s Rockyview General Hospital and conducts research into whether losing weight before surgery leads to better post-surgery outcomes, points to a small 2019 study by researchers at the U.S. National Institutes of Health. It shows participants ate about 500 more calories and gained weight on a diet of ultra-processed foods compared with unprocessed foods.

The study looked at 10 men and 10 women with stable weights and an average BMI of 27 (anything between 25 and 29 is considered overweight), who were randomized to receive either ultra-processed or unprocessed diets for two weeks, immediately followed by the alternative diet for two weeks. Meals had the same calories, energy density, macronutrients, sugar, sodium and fibre, and participants were allowed to consume as much or as little as desired. Unsurprisingly, people desired more of the ultra-processed diet.

“What is it about ultra-processed foods that makes a difference?” asks Berchuk. “Is it the hyperpalatability of it? The way it hijacks our brain’s reward centres? The lack of fibre? The research isn’t clear on why.”

The NIH study was designed to establish a causal link between ultra-processed foods, appetite and weight gain, not to figure out how it happened. It did hint at why people ate more calories on the processed diet: The appetite-suppressing hormone PYY increased as participants ate the unprocessed diet, while the hunger hormone ghrelin decreased.

Université de Montréal professor and public health nutrition expert Jean-Claude Moubarac says the problem with most diets is they treat food as carriers of isolated nutrients, largely ignoring food processing and the cultural aspects of eating. He helped create Brazil’s food guidelines, which focus on how food is made and classify it according to four levels of processing. (In Canada, the revised 2019 guide suggests “limiting highly processed foods,” but doesn’t quantify that or its recommendations to eat a variety of food, including protein, whole grains and “plenty of fruits and vegetables.”)

Moubarac says the takeaway from Brazil’s guide is to eat “minimally processed foods, mostly from plants, with limited meat,” adding that the Mediterranean diet works “because it respects those principles. As long as you respect those basic principles, you can eat Chinese style, Middle East style, anything.”

Coaching apps employed by Noom and Weight Watchers are a new addition to dieting strategies. The key benefit is that they make you pay attention to what you eat, experts say. “Whether it’s tech, or just writing down what you eat, you can say, ‘Oh my, I’ve eaten three cookies today. I shouldn’t have any more,’” says Keller.

Outsourcing your inner nag can be especially important when you’re trying to change your routine in some way. “Your executive function doesn’t want to work all the time,” says Jennifer Kuk, an associate professor at Toronto’s York University who studies how obesity, nutrition and physical activity are related to health. “Reminders and tips can just make the journey simpler.”

Here’s how the most popular diets stack up, especially for older adults:

Oprah has long been the official spokesperson for Weight Watchers, rebranded in 2018 as WW, and the diet plan has a new, individualized personal points system that includes the foods you love. It’s meant to guide you toward foods higher in unsaturated fats, fibre and protein and lower in added sugars and saturated fats. Members can chat with coaches 24/7 and connect with other dieters for support through the app or the website. Now that COVID-19 restrictions are easing, in-person workshops are starting up again at WW studios, but members can also participate online.

“It works because you’re reducing calories and it tries to make it easier for people to do. The social aspect is also good — a lot of people find that helpful,” says Kuk. “The issue is that it costs more than not dieting. People with obesity tend to have lower incomes, so this becomes a bigger burden. It’s a weird thing that dieting costs more. You’re eating less, but healthy foods cost more.”

Moubarac also sees some challenges with the WW program. “There’s an anxiety over constant control of the amount of food you’re eating. If you eat food that is good quality, and under good circumstances, then your body will tell you how much to eat.”

Unlike other low-carb diets, which are about consuming protein, a strictly keto plan centres on fat, which can make up as much as 90 per cent of daily calories. It forces your body to switch from using glucose from carbohydrates to using fat for fuel. It does this by relying on ketone bodies, a type of energy the liver produces from stored fat.

Registered dietitian Kathy McManus, director of the Department of Nutrition at Harvard-affiliated Brigham and Women’s Hospital, says the biggest risk of the keto diet is that it’s high in saturated fat, which should make up no more than seven per cent of your daily calories, because of the link to heart disease.

It might work for a couple months, says Keller, but is often hard to sustain. The lack of carbs in the form of unprocessed foods such as legumes, whole grains and fruit “impacts your gut microbiome and reduces fibre. The gut, which is a muscle, needs fibre to function properly,” she says. “Fibre is like exercise for the gut.”

The Mediterranean keto diet tries to address these concerns. “I think Mediterranean keto is just a way of trying to make the keto label less alarming to those who would say that keto is dangerous,” says Berchuk. “It’s a low-carb diet with less red meat and more fats from fish, nuts and seeds, dairy and olive oil.”

As she points out, a ketogenic diet has a strict medical definition — it’s a diet so low in carbs that you end up with detectable levels of ketones circulating in your bloodstream. “Most people ‘doing keto’ aren’t actually in ketosis,” says Berchuk.

Some people on this weight-loss regimen follow the 5:2 method, where they eat 600 calories on two of seven days, while others follow the 16/8 method, where they fast for 16 hours and consume all their calories during an eight-hour window one or two days a week — although some do it seven days a week. The Eat Stop Eat version, invented by Canadian nutrition advocate Brad Pilon, requires a 24-hour fast on one or two non-consecutive days a week. No matter how it’s done, the theory is your body exhausts its store of glucose when you fast, forcing it to use fat for energy.

“There is evidence in mouse models, but not humans yet, that there’s some benefit to aligning food intake with circadian rhythms,” says Berchuk. When it does work, she says, it’s probably because it makes you restrict calories.

“Stopping eating at 6 p.m. and not eating again till 8 a.m. is good for just about everyone,” notes Keller. “That’s because high-calorie, high-sodium foods are what we tend to snack on at night.” Research also suggests our bodies are most efficient at processing food during the day, and less so at night.

In the end, experts say endorsing one diet over another is not particularly helpful. “The question is: Why are you eating excess calories?” asks Kuk. We focus so much on cutting calories that we lose sight of the reasons we  gain weight, like eating before bed or choosing processed foods when we’re rushed. “Anything works as long as you stick to it,” she says.

A version this article appeared in the April/May 2022 issue with the headline ‘The Diet Decoder’, p. 84.

3 Reasons to Add Plant-Based Proteins Into Your Diet

3 Healthy and Delicious Ways to Help Spring Clean Your Diet