Grey Area: How a Cringe-Worthy Twitter Ad Sparked a Conversation Around Ageism in Advertising 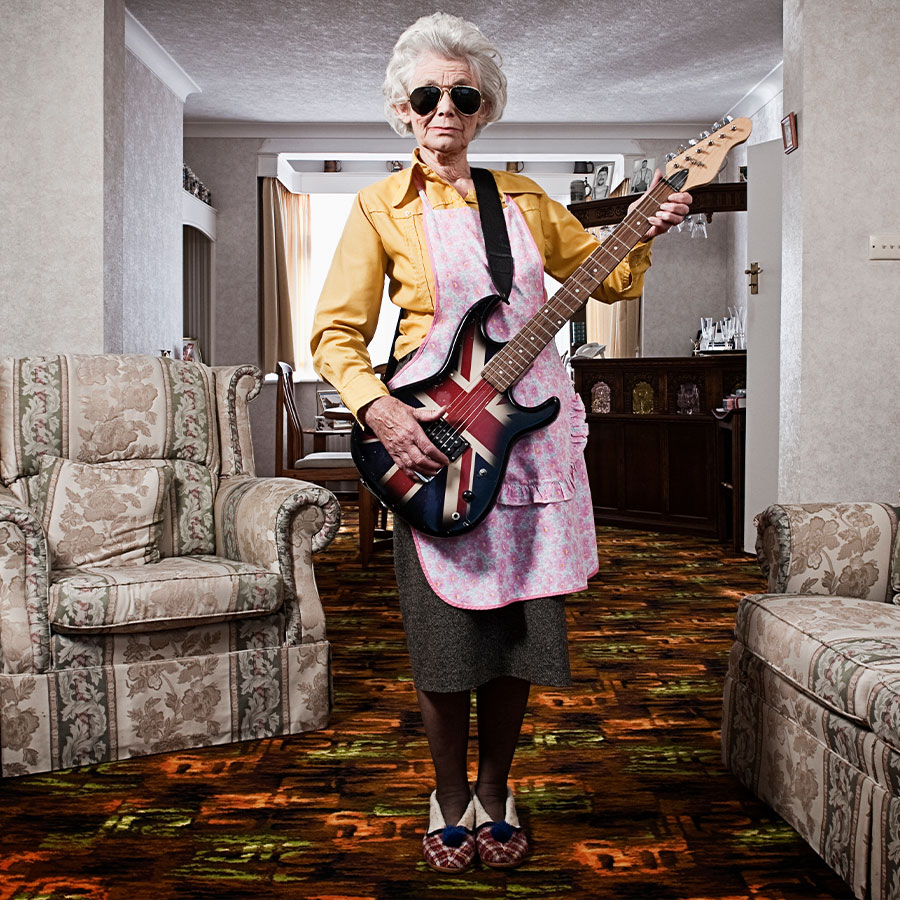 A recent social media ad for a wellness brand caused controversy with its depictions of women supposedly in their 40s, 50s and 60s. Photo: Simon D. Warren/Getty Images

That was the succinct, social media side-eye that 46-year-old Nikole Sheri Hannah-Jones, the Pulitzer Prize-winner behind the 1619 Project, gave Better Me’s ‘28 Day Walking Challenge’ when it cropped up in her Twitter feed. The online health and wellness enterprise encouraged her — and all women aged 45 to 50 — to “ease into” a walking program that should “incorporate rest days.”

Accompanying this sage advice was an illustration of an elderly lady in a dowdy cardigan, with some sort of floral bird ornament festooning her grey hair, helpfully assisted by a cane. With Better Me’s geriatric 40-something avatars requiring walking sticks and post-stroll convalescence, predictably women north of 50 did not fare much better. In this arena, the cheerful infographic — divided by age, from 45 onwards, in five-year increments — presented women in the 65+ group clasping house cats to their breasts as they went about the low-impact cardio of wandering down the street. See the full ad below.

“Is this what they think women over 45 look like???” tweeted Terri Gerstein, the Harvard Law School program director who’d originally flagged the Better Me campaign, in a post that went viral with a comment’s section parade of sardonic banter.

“I’ll be 45 in a few years so guess I’ll start making plans to get rid of my squat rack and weights and find a cane somewhere so I’ll be ready for the transition,” one person tweeted.

Another responded, “I’d keep up with the weights because you’ll have to be ready carry a cat everywhere you go in another decade or two.”

Many women zeroed in on what they assumed to be the crux of the matter, including one who wrote: “What person in their 20s did this? Put a blade on the end of the cane I’m supposed to have and point me in his direction. Me and my hair bird about to do damage.”

Icing the cake: the initiative’s link took readers to Better Me’s Walking Challenge page … where they were treated to an array of illustrated male counterparts, also divided into age groups, but which, regardless of their stated age range, were all shirtless and gym-buff with eight-packs.

“Pretty sure BetterMe’s 23-yo social media content creator is a dude,” scoffed one Twitter wag, summing up what every woman was thinking.

Despite an increasing number of high-profile brand roll outs targeted at older consumers (think: Pantene’s “Power of Grey,” Helen Mirren for L’Oreal, or Clos du Bois’ “Live a Little” campaign) product marketing often fails to represent the over-50 demographic authentically — or at all. Though it’s a vast, rapidly expanding demographic with enormous spending power.

A global marketing misapprehension that, like all ageism-related issues, affects women more acutely, a 2018 study by the UM global media agency found that 44 per cent of British women over 50 find advertising to be patronizing and 27 per cent believe ads contribute to negative stereotypes of their age group. In the US, an 2021 AARP survey showed that 47 percent of 50+ Americans believe that advertising “reinforces outdated stereotypes.”

Odd, given that a 2022 study by Age of Majority, a firm that specializes in marketing to older people, categorized three-quarters of consumers over 55 as “Active Agers” — those who are mentally, socially, and digitally active. In the USA alone, this group controls 70% of the nation’s wealth. Yet, even faced with the stats — that the 50+ crowd is a thriving, monied market, more Sharon Stone than Stone Age — advertisers continue to bungle the messaging.

Why? Because, just as the women mocking the antique cat ladies of the Better Me campaign surmised — most ad execs are half your age.

A 2020 study by ICA Talent Census data uncovered that 70 per cent of Canada’s marketing workforce is 40 or younger and just 11 per cent are older than 51. “A considerably lower proportion than the broader labour market in which Canadian workers over 50 account for 35.42%,” read a Globe and Mail Marketing Group overview of the data. “There are so few grey hairs in advertising, ‘old’ means anyone who’s dipping a toe into middle age. It’s an issue that persists across many of the world’s most prominent advertising markets.”

“Agencies don’t want to spend money on senior creative people. You can hire two kids out of college for one senior creative and they’ll work 40-80 hours a week,” explained one award-winning senior creative director in his 60s about ageism in the industry. Summing up the problem, anonymously, for a 2022 Q &A with the online marketing industry magazine, Digiday.com, he added, “That’s the trade-off of advertising agency executives. It’s quality versus quantity. [Agencies] need to start thinking of them as the tribal elders. The sheer amount of wisdom and experience they have.”

“We’re a powerful force in popular culture with the ability to shape what people think, believe and do,” writes Manhattan branding consultant, Cindy Gallop, in an essay on advertising ageism for 3rdThird, an agency focused marketing to those in the “3rd third of life.”

“We can change the way aging is depicted in advertising by changing ageism within the ad industry itself. If we do that, we can change the way society views aging. When you’re told the target is youth and millennials, ask ‘Why?’ Seriously. Ask why,” the “proud 59-year-old,” advises her peers. Instead, the industry needs to “tap into the aspiration of age” and stop fetishizing youth, “lead with what’s aspirational about being older, and the young will follow—not the other way round.”

After all, Gallop points out, the over-50 set offers a covetable list of non-youngster qualities — from having the confidence, personal style, and individuality that comes with age as well as the money to spend, to being “experienced — at everything” and “not giving a shit.”

“We’re very happy with who we are. We don’t aspire to be young. We don’t look, dress, or act like those old-people ad clichés.”

Now, if only the advertising world could stop being so old-fashioned.

Giving Out Flowers on TikTok: ‘Random Act of Kindness’ or Just Benevolent Ageism?