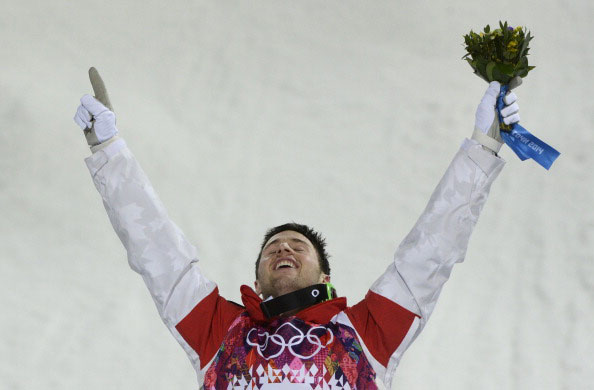 Among them was one man watching on the mountain who is acutely aware of what every bounce and jostle does to the bones and joints of Bilodeau.

Dave Campbell, 56, is a Montreal sports therapist and osteopath. He’s a consultant to the Montreal Canadiens. Sochi is his fifth Olympics.

He’s worked with Bilodeau for the past six years, helping him become the first Canadian to win Olympic gold on Canadian soil at the Vancouver Olympics.

Campbell and Bilodeau are part of the B2ten project, a privately funded, not for profit organization that provides value added support for targeted Olympic athletes.

In Sochi, Campbell says, “I’m responsible for taking care of a few athletes that are supported by B2ten, but while I’m at the medical clinic in the athletes’ village, I’m also available to help with anyone who needs some help.”

He interacts with the core medical team, shares their facilities and can refer his athletes to any of the physicians if necessary.

Campbell was at the clinic Monday morning when Charles Hamelin won his gold medal for speed skating.  “A big cheer went up,” he says.

The athletes, he says, “usually arrive here in excellent shape. I do some maintenance work with them after training to make sure everything is working well.”

Nevertheless, he says, “I’m always prepared in case some new injury comes about during training.”

Campbell’s own training for the Olympics is simply getting himself in the right frame of mind.

“The only preparation I do for these Games is to make sure I show up knowing that there will be logistical problems around every corner and you need to be flexible to work around them.”
Campbell says he”s “learned to give the athletes the space they need. I don’t need to pursue them They know when they need me. They have enough to worry about with their event, their family, media — so I stay in the background invisible, but available at all times.

“The hotel that the COC is using for secondary support staff is very nice and well organized. It’s been here for two years and is well established. We have a ten minute walk to the gondola which takes us up the mountaintop to the athletes’ village. The athletes seem quite comfortable in the village up here.”

The food is okay, too, he says.

“Breakfast at the hotel is a traditional European breakfast, It seems the surrounding restaurants are not traditional Russian cuisine, but rather cater to the tourists. That being said, pigeon was on the menu tonight at a restaurant that I went to. But I chose the rabbit instead.”

His only complaint: “No Russian beer available at the restaurants.

“But I had some nice Russian red wine.”