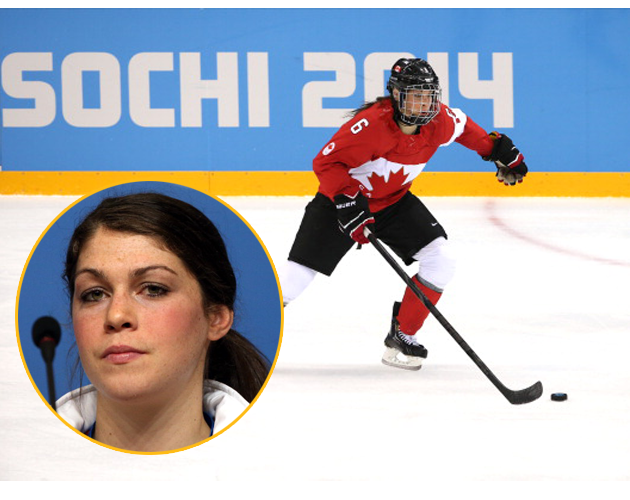 When Bob Johnston and his wife Colleen land in Sochi on Friday after a 20-hour trip, he’ll be checking out the Russian airport with a practiced eye.

Unlike almost every other person on this planet, he finds airports extremely interesting — at least from a business point of view.

Johnston, 55, is the CEO of the Greater Sudbury Airport.

The couple, who grew up and married in Nova Scotia, have six children, all of whom are exceptional hockey players.

Rebecca, 24, in the middle, is the one with an Olympic gold medal and almost certainly the winner of another medal.

In fact, it’s so likely the Canada’s women’s hockey team will reach the final on Feb. 20, with the U.S. an an opponent, that her parents plan to be in Sochi only for the last week of the Games, missing most of the preliminary matches (including Wednesday’s, when Canada beat the U.S. 3-2).

Rebecca, who plays forward, has already scored against Finland and Sweden in the early rounds.

“I’ve never seen a year in the last six or seven that she’s enjoyed more,” says her father.

Making the team for her first Olympics four years ago, he says, was “grueling, mentally and physically and she didn’t know if she’d make it.”

They get 28 girls together in the summer and put them through five months of evaluation, he explains.

“They’re competing against friends for spots on the team and it’s terribly sad when five or six are let go. It was a nerve-wracking process.”

Rebecca was the second youngest member of the team in Vancouver.

“Now,” he says, “she’s a little more of a veteran, almost like a leader. She still had to work to make the team, but she’s had the confidence to enjoy it this time, not to be stressed every day.”

The six Johnston siblings, all close in age, could be ideal subjects for a nature vs. nurture study.

Bob and Colleen are both very athletic and love outdoor sports. They passed this on to their children, perhaps genetically, but certainly in the way they were raised.

“We had five kids age 7 and under,” he recalls. “We’d pack them all up and throw them on the ice and let them beat up on each other.”

You could say it was ideal training for the NHL (indeed, Rebecca got a roughing penalty in Wednesday’s preliminary against the U.S.), but Johnston says instead, drily, “It was a form of babysitting.”

Their sixth child, Steven was born a little later, when number five, Jacob, was 28 months old and presumably already scoring goals on a regular basis (when he wasn’t benched for roughing.)

There were lots of other sports, too, but there was no cable TV until the oldest was in high school. That would be Katie, who went on to play hockey and varsity soccer for Harvard.

Rebecca was on the Cornell University hockey team, as was sister Sarah and brother Jacob. Ryan is playing for Colgate University and baby Steven is playing Junior A at Pembroke.

How does a family make that happen, when financing even one offspring in youth hockey can be a challenge?

“We made it our priority and we were both very fortunate to be working,” says Johnston.”My wife and I didn’t go away on a Caribbean vacation until we were in our late 30s. Our entertainment was watching our kids at the track or on the soccer field. After work, we’d push two kids in the stroller, with the other four on their bikes, and we’d go to the field and kick the ball around.

“We were never a family that bought the best skates. We’d go to Canadian Tire, find ones that fit and then pass them on to the next one when they fit.”

The Johnston kids are not only close in age.

Rebecca’s siblings, says their father, “are just so proud of her, cheering her on. They all support one another. We’re a very close family.”

And as parents, he says, “We don’t measure our children by their accomplishments, Olympics or anything else. Their value system is what’s most important.”

Although the Johnstons are looking forward to Sochi, Bob says, “I don’t think anything could top Vancouver — our country, friends and family there, ease of getting there and watching the Games.”

Arrangements for Sochi have been “a horrendous process — visa, special passes for the hockey games, travel. That part was a real pain.

“In Vancouver, we did the whole city scene, the restaurants and things to see there. In Sochi, we want to enjoy the whole Olympic moment.”

“We’ve got tickets for speed skating and I’d like to get to the ski hill for cross country.”

Figure skating would be great to see too, he says, “but the tickets are $700.”

However, just as the credit commercial suggests, some things in Sochi are priceless: watching your daughter win an Olympic medal.