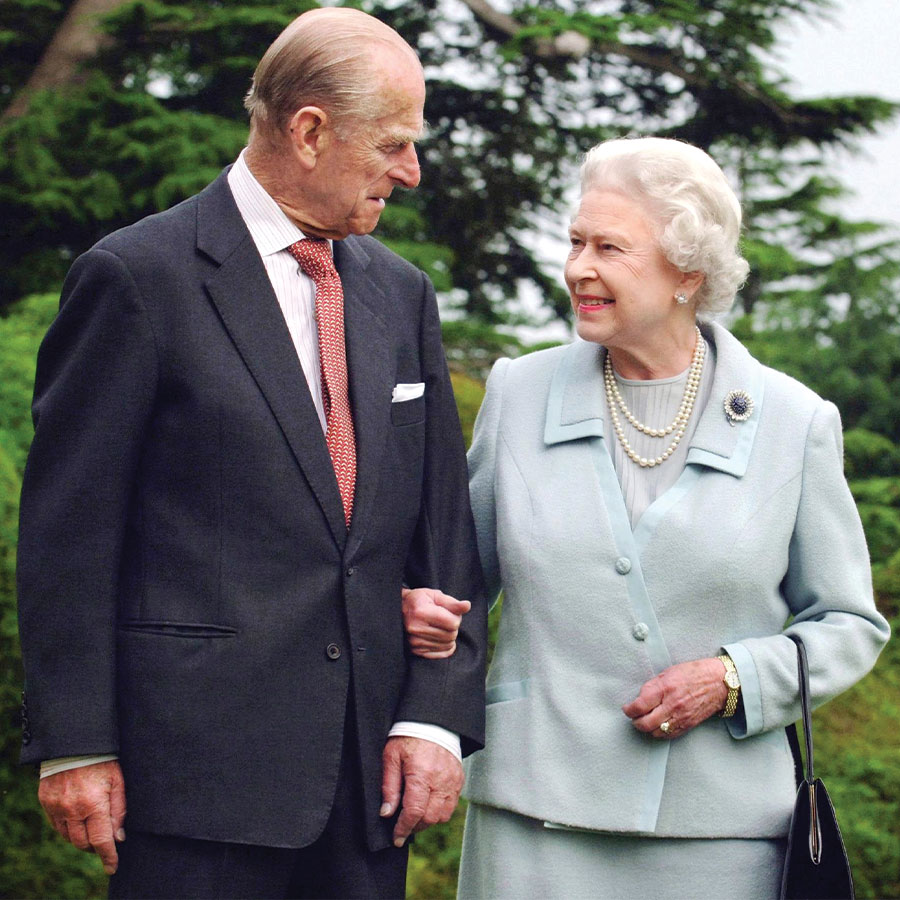 Here, some of the factors that are (quite possibly) the reasons Queen Elizabeth continues to enjoy good health.

Her Majesty Queen Elizabeth II, was born Elizabeth Alexandra Mary on April 21, 1926. The oldest reigning British monarch, along with her husband Prince Phillip, have both exceeded the life expectancy for Canadian women and men — which is 83.3 and 78.8 respectively, according to the latest report from Statistics Canada.

But Dr. Michael Gordon, a geriatric medical specialist who trained in Scotland and met the Queen’s mother, feels that nowadays, even being in your 80s is not so old. “I’m a geriatrician and, in my practice, that’s like late adolescence. She’s not 100 yet. Her mother, the Queen Mother, lived to 101, and there’s a pretty good chance, barring the unexpected, that Elizabeth can get there herself.”

Yet even the best genetic makeup can be destroyed by external environmental factors. Researchers say we accelerate the aging process if we smoke, eat poorly, drink heavily, don’t exercise and are overstressed. Successful aging, says Gordon, is measured in both quantity of years and quality of life — not simply breathing but retaining vitality and enthusiasm, enough to make life well worth living.

“The Queen has regular medical screenings and access to medical care that keeps her in good health,” says Dr. Robert Petrella, of the Lawson Health Research Institute at the University of Western Ontario. Preventive screenings for both men and women should include measurements for blood pressure, cholesterol and sugar. The results can catch deadly yet avoidable diseases such as heart attacks, stroke and diabetes. Men may also be advised to have an annual prostate check, and women, a regular breast examination, mammogram, pelvic exam and pap test.

The Brits are big walkers, and so is the Royal Family. “I know this because Sir Ian Hill, my professor of medicine at the University of St. Andrews in Dundee, Scotland, was the physician to the Royal Family when they stayed in Scotland,” says Gordon. “They’re known for their enjoyment of long walks on the grounds of Balmoral, where they stayed during their summer vacations. The Queen Mother and the Queen both were always avid walkers.”

The Queen is also known for her love of horses — she breeds horses and ponies — and horseback riding has excellent health benefits. Longevity specialist Dr. Vincent DeMarco says that after a good diet, exercise offers the most health benefits. “It improves almost every measure of health we can devise, and there is a lot of evidence supporting the relationship between exercise and longevity.” How much exercise you need varies according to your medical and fitness history and current test results. Even mild exercise, such as a 30-minute walk a day, can help lower blood pressure and stress levels.

Queen Elizabeth is still a functioning head of state involved with high-level meetings that would keep her mentally acute. Former British Prime Minister Margaret Thatcher said in her memoirs, “Ministers take their regular meetings with the Queen very seriously … they are quietly business-like, and Her Majesty brings to bear a formidable grasp of current issues and breadth of experience.” Petrella adds, “She is in a position of leadership and not just a figurehead for many of the foundations she’s involved with. There are residences in different parts of the country, which allow her to change her environments and be [mentally] stimulated by change.”

The Queen has also visited the Google headquarters in London, indicating an interest in the Internet, and is said to e-mail her grandchildren, too. Anything that challenges your mind — staying engaged at work, puzzles, strategy games, reading, dance or music classes, debate and conversation — will keep you mentally in shape as the years go by. Use it or lose it.

By no means has the Queen had a stress-free reign or an easy time as a parent. Three of her four children — Charles, Anne and Andrew — had failed marriages ending in scandal-plagued divorces that threatened the very existence of the monarchy itself. In 1992 for example, a year the Queen would dub “Annus horribilis,” there was  a devastating fire at Windsor Castle, destroying priceless artifacts and reaping a repair bill to the tune of a reported 40 million pounds.

As the monarch, even though she is not a policy-maker, she has had more than her share of issues to deal with — her father, George VI, was not meant to be king and, when her uncle, Edward VIII, abdicated for the love of Wallis Simpson, her family was thrust into the pressure cooker. Aside from losing her father, who succumbed to lung cancer at what we’d now consider a relatively young 56, and consequently having to take the throne at 26, she has faced wars — from surviving the Blitz, her family falling victim to the IRA, her son Andrew fighting in the Falklands, her grandson Harry serving in Afghanistan and her troops in the much-opposed war in Iraq to London being a constant target linked to the War on Terror — and social approbation, perhaps most notably her country’s outpouring of emotion in response to the death of Diana, Princess of Wales, and the subsequent criticism of what was perceived as the Queen’s unfeeling reaction.

“It’s not just a job where she sits around being nice to people. She does live in a stressful environment, but the stresses may not all be negative,” says Gordon. He explains that ongoing stress in life gives human beings creativity, tenacity and interest in life, as long as it’s not destructive stress. Destructive stress leaves you feeling constantly, personally threatened. Chronic destructive stress increases the risk for stroke and heart disease. Research suggests that meditation, deep breathing and chanting are helpful in reducing stress levels.

Though not known for wearing revealing fashions, the Queen has never appeared overweight. According to Dr. Walter Willett, chair of the department of nutrition at the Harvard School of Public Health, next to not smoking, staying lean is probably the most important thing we can do to stay healthy and live longer. This could also be the secret to the slim and trim Prince Philip. Leanness matters because fat cells produce hormones that raise the risk of Type 2 diabetes. Study after study confirms that extra weight, especially around the belly, cuts years off your life. Check with Health Canada for recommendations for healthy weight ranges.

6. Eat a variety of healthy foods

The typical British diet, by and large, has not been a healthy one because it’s heavy on fats and carbohydrates, says Petrella, but this has certainly changed There is a better range of fresh fruits, vegetables and grains more typical of a  Mediterranean diet available.”

This kind of anti-inflammatory diet has been linked with promoting longevity and, as noted in To Set Before a Queen, the cookbook edited by Maureen Owen based on the cookery of Alma McKee, cook to the Royal Family during the 1950s, Queen Elizabeth benefited from meals prepared with fresh vegetables, game and poultry provided by the royal estates, long before the benefits of this kind of diet came to light. Fish, too, is a staple on the royal menu, with it being served, during McKee’s time, nearly every day. And with her son Charles, Prince of Wales, a long-time leader in the organic farming movement, the Queen is tapped into eating well.

“I’m willing to assume that, because of her status, the choice of foods for her is probably pretty balanced and well-prepared,” says Gordon.

“Various teas have various benefits. Green tea is the most widely studied and probably the most beneficial. The longest-living persons in First World countries come from Japan. This may be due to two factors: green tea and fish.” Barley water, usually flavoured with lemon or other fruit, is a popular British drink and a favourite of the royal household. Owen included McKee’s recipe for barley water — 1/2 cup pearl barley, 2 1/2 quarts boiling water, two lemons, six oranges and brown sugar to taste — to which the Royal Family were apparently all “addicted.”

The Queen has been quoted as crediting it for her peaches-and-cream complexion. Barley is a rich source of soluble and insoluble fibre; barley water is said to help support the kidneys, especially in times of stress, and may be therapeutic for those who have kidney and bladder ailments. A royal warrant has been bestowed on the British soft drink brand Robinsons, makers of barley water.

The Queen Mother was often the subject of comedic parody claiming she was tipsy from drinking whisky. “There is no question that in this family, alcohol is part of their normal activities, and small amounts of alcohol, unless there is an illness or contraindication with medication, appear to have a beneficial effect on the heart and brain,” says Gordon. Anecdotally, he recalls a patient who attributed his longevity — he lived to be 105 — to having a nightly shot of Canadian Club whisky. Studies show evidence that having red wine — rich in the antioxidant resveratrol — in moderation is good for us. “That’s one of the benefits of the Mediterranean diet. Not just fruits and vegetables, but wine as well,” adds Petrella.

Queen Elizabeth has a special love for dogs, especially the Pembroke Welsh corgi. In a study at State University of New York, Buffalo, stockbrokers with high blood pressure who adopted a pet showed a 50 per cent decrease in blood pressure compared with their counterparts without a pet.

“Getting a positive response from an animal may make one feel better and likely has an effect on the metabolic system to produce higher levels of positive hormones, improving feelings of well-being,” says Petrella.

People who are connected to those around them — through marriage, friends, a spiritual community or other networks — tend to live longer than those without strong ties. The Queen has a rich social life. She and Prince Philip reached their 60th year of marriage in 2007, making Elizabeth the first monarch to celebrate a diamond wedding anniversary. “They’ve had a long life together, engaged in raising a family of four children and now eight grandchildren,” says Petrella. “The fact that she’s been with the same person for all these years has provided a very stable relationship for her.” Protect or improve your emotional health by staying in touch with friends, family and the greater community.

11. Help others — help yourself

Volunteering and sharing with others can be gratifying and meaningful. Charity work is quite important to Queen Elizabeth, patron of more than 600 organizations. During her Golden Jubilee in 2002, she asked that people wishing to commemorate the occasion make a donation to one of her favourite charities: Barnardo’s, Cruse Bereavement Care, I CAN (which helps children with speech and language difficulties), the Royal Agricultural Benevolent Institution or the Soldiers, Sailors, Airmen and Families Association. “The Queen is doing it [as much] for herself because it’s really good for her,” says Gordon. “The look on the faces of the recipients can’t help but make her feel good and feeling good is a good thing.”

12. Have a spiritual focus

Aside from her official religious role as supreme governor of the Church of England, Queen Elizabeth is said to regularly attend services. In her 2000 Royal Christmas Message to the Commonwealth, she said, “To many of us, our beliefs are of fundamental importance. For me, the teachings of Christ and my own personal accountability before God provide a framework in which I try to lead my life.”

Zoomers of the Year: From the Queen to Dolly Parton, Our Top 10 Picks