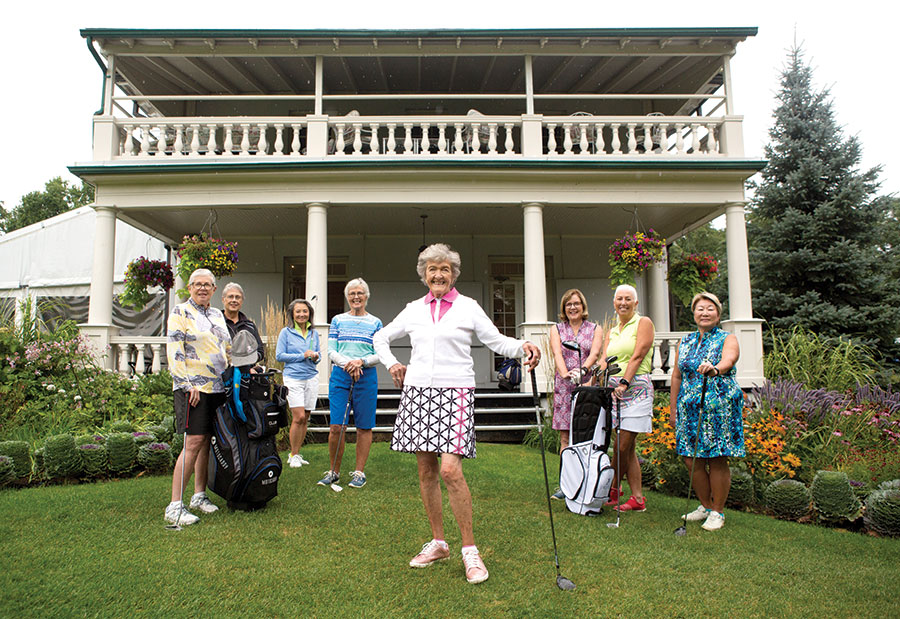 There is nothing more compelling than a secret garden. East, then straight downhill off Yonge Street just as it crests Thornhill, the entryway to Ladies’ Golf Club of Toronto swoops you back to a time when this northern part of the city was all rolling farmland. The intense quiet is the primary sensation within the tree-lined oasis. Then your other senses amp up: fresh-cropped greens pungent in colour and scent, sweet little bridges straight out of an Austen novel and 130 acres of perfectly manicured gardens. At the end of the drive rises a grand manor house, its forest-green sills popping against the crisp white paint.

The women gathered inside the clubhouse are the feisty, vibrant punctuation to all the serene gentility of their surroundings. It has always been thus: back in 1924, a determined 34-year-old teacher-turned-bank worker named Ada Mackenzie was annoyed that women golfers were restricted by practice and play times reserved for men. Having competed (and won) internationally on the amateur women’s championship circuit, Mackenzie was struck by the women-only golf clubs in England. She returned home and went location shopping, selecting a country estate known as Brooklands, owned by Strafford Watson, son of a prominent Toronto lawyer.

Mackenzie came up with a scheme to sell memberships to meet the asking price and, at the 11th hour, still short of the necessary sum, she turned to J.P. Bickell, a former co-owner of the Maple Leafs to help her close the deal. Then she commissioned legendary Toronto golf-course designer Stanley Thompson, the architect behind such iconic fairways as Banff Springs and the Highlands Links in Cape Breton, to carve out 18 holes into the landscape. (Fun fact: they had to pretend to be married for Mackenzie to be able to purchase the property.) The Watson home was transformed into the clubhouse, its veranda – which you can see as you approach the end of the course – is a raucous gathering place after Sunday club tournaments. Now, as back in Mackenzie’s day, the primo tee times between 8 a.m. and noon are reserved for women only. Rated a par 70 for men and a par 72 for women, Ladies’ is the only all-female private members club in North America.

The fight for gender parity on the links is still real today: golf courses only attract 23 per cent female players, according to a 2018 survey by the U.S. National Golf Foundation. But at Ladies’, the real value in being a member is more about the intangibles. Come for the golf, goes the informal motto, stay for the friendship. There are about 450 members at Ladies’: women can join at 18, but there are several active athletes in their 90s. About 140 men are annual guest cardholders, though they can’t play those peak-demand hours, and they don’t have a vote.

“You are always going to see someone you know,” says Peta Lomberg, 70, who calls golf “the elixir” that keeps her young. Originally from South Africa, Lomberg started playing at age 50, and “Within a week, I was addicted.” Having men on the course and in the clubhouse, she says simply, “normalizes things.” Calling her tee time “the best place to decompress,” Lomberg waxes poetic about the idyllic surroundings so close to the city. “I get a lot of walking points in as I play four times a week. You don’t even realize you are walking. You have time to admire the plants. Some of the women are keen birders. We see foxes and coyote and deer. It’s a peaceful place.”

But when crises strike, there is a built-in network of support, Lomberg says. “When shit happens, dozens of women step up.” It is the keen sense of community and emotional support that comes up most often as the women talk about what they get out of the club.

Committing to help run a members’ club adds a lot to the experience, says Betty Chee, 62, who is “honoured to be the first non-white president” and who chaired the committee that created a new strategic plan that will guide the club in the next few years leading to the club’s centennial year in 2024. That plan involves pushing for diversity. “Golf is a certain type,” she says, meaning older and predominantly white and wealthy. “We are trying to change that strategically.” That starts with the camaraderie around women. Here, she says, women realize that “we are all more the same than different.” Chee says they are still fighting some of the same battles Ada Mackenzie began. “The equality issues Ada fought for are really current,” says Chee of the larger societal battles for equal pay for equal work and equal access for all. “There is still a need and a reason for us to be here, a place where women come first.”
Golfing is particularly adaptable to the needs of its devotees as the years impose physical limitations. While Lomberg likes to walk and carry her own bag, if her shoulder is sore, she will use a cart without guilt. “We have the tools to stay mobile,” she says. Golfing provides the motives and the opportunities “to find your purpose in life.”

It takes Thomas, 73, an hour and 20 minutes to get to Ladies’ from her home in the east end, but she says the drive is well worth what she gets back in return. She joined in 2011 but didn’t golf once her husband was diagnosed with multiple myeloma in 2013. She returned to the club after his death and was supported “by my pals at Ladies’ the entire time I was away. It was like family – I’m sure they had me on a schedule, making sure I was going out and eating and, most of all, staying active.” They got her back into her groove, she says, “and encouraged me to give back, too. You laugh together. Sometimes you cry together. But there is a generosity of spirit that you can only find in a women’s club.”

At the age of 93, Veyvara has gone through many ages and stages of life at Ladies’. She has been golfing since the age of 14 and first joined the club in 1949. At the time, the daytime ladies “were all women of means.” She lit out of her job downtown working for a forensic psychiatrist at “five minutes to 5 p.m.” on a weeknight, and “I could get to the club by 5:30. I played with the nurses and schoolteachers after work, friends I never would have met otherwise.” Marriage and motherhood changed her playing schedule, but when her husband died in 1979, and then her daughter went off to university, “I had no commitments, I was free to play.”

Today, she calls herself “not very good” but gets out there to play anyway, with the aid of a cart, three times a week. “Everybody knows who I am. I’m the relic of the club. They don’t make any money off me. The most I order is the special Caesar for $5 if I’m here at 5 p.m. on a Sunday.”

Ladies’ was the place that first made Aki, 61, feel at home, when she moved here from Japan. She grew up with her father playing the game, and her husband was an avid golfer back home as well. She had never tried it, but when she went to Ladies’ on a newcomers’ group tour, she saw a way to bridge that gap. “When I came here, we decided we wanted to get old playing golf together.” Today, she plays nine holes three times a week with her husband and reserves 18-hole play for Sundays with her female friends. The women, she says, are more supportive; her husband is stricter with the rules. “This is my second home,” she says, “for 30 years.” She has been on the board of directors and says her golfing life “keeps me physically and emotionally healthy.”

Wagg, an accountant, joined the finance committee to contribute her expertise to the organization. “You get out of this what you put into it,” says Wagg, who declined to give her age. “When you finish working, this is a wonderful way to spend your time, among friends.” Plus, she adds, golf has great hidden benefits: “I sleep better, very peacefully.”

More games means more rewards. “It’s my happy place,” says Wilson, 62. The club was familiar because her sister, Jan Flott, who is 73, has been a member for 54 years. Keen is an understatement for Wilson. In the summer, she plays five or six times a week. And in the way of sisters everywhere, the two have carved out their own areas. “We don’t play together that often,” says Wilson. “I have my group, and she has hers.” But what does resonate for both siblings is the lack of attitude here. Says Flott: “It’s not about what your husband does here.” There is room to be competitive on the course and to seek challenges at club tournaments. But at the same time, adds Flott, unlike at many men’s clubs, “Skill level isn’t a barrier to play here. The game, in many ways, is an excuse to spend time together. A lot of us are in our 70s, and you wouldn’t know it. We don’t feel it!”

Kynoch – affectionately known as Lady Kynoch – certainly doesn’t feel or look her 90 years. Playful and flirty in a kicky short golf skirt, the former dance instructor from Scotland has got legs, and she knows how to keep them moving. A member since 1966, Kynoch currently plays four times a week, mostly walking the holes on her own power. With her motto “I like to have fun,” Kynoch says her game isn’t what it was, and so what about that? “There comes a time when I’m not hitting as well. Oh well, at least I’m getting out and having fun.”

Ada Mackenzie’s portrait still hangs in the front hall of the clubhouse. Many of the women pause and nod to her as they pass by.

A version of this article appeared in the July/August issue with the headline, “My Fair Way Ladies,” p. 72.

Meet the Conoodlers, the Canoeing Club Portaging Their Way to a Long Life

Fellowship of the Sea: A Bond Forged by the Ocean