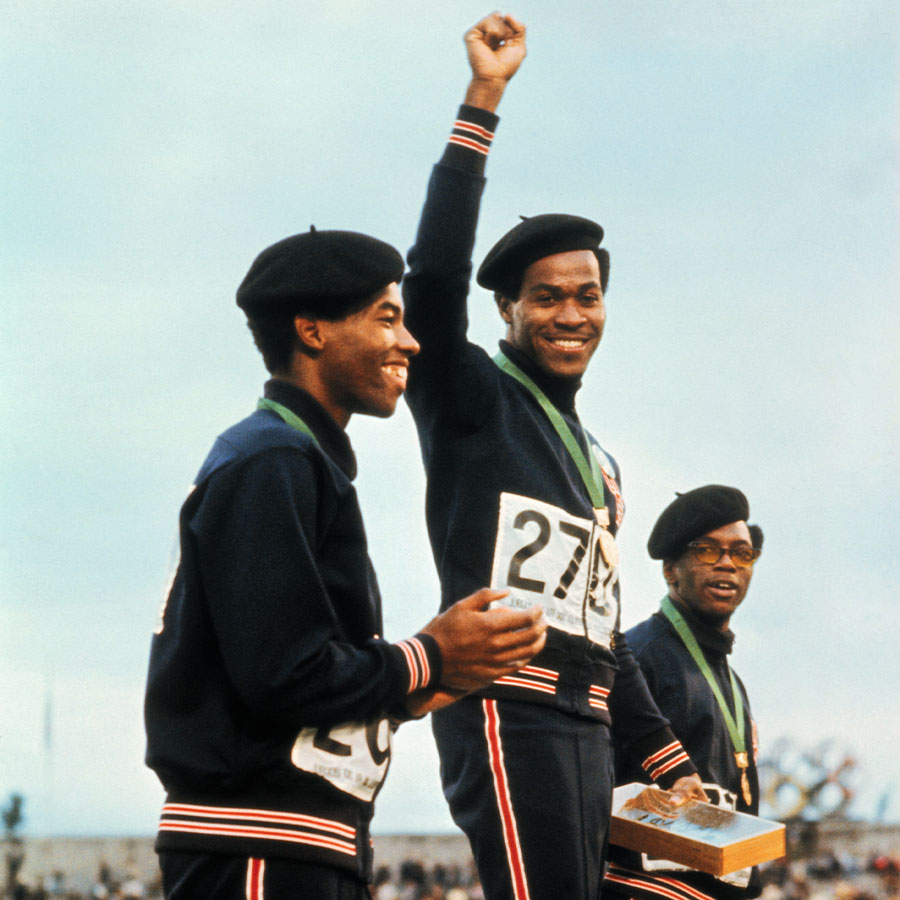 Larry James, Lee Evans, and Ron Freeman of the United States, winners of the 400 metre run in the 1968 Olympics in Mexico City, stand on the podium in their black berets, worn to represent Black Power. Many African American athletes boycotted or protested the 1968 games in protest of racial discrimination and human rights issues. Photo: Bettmann / GettyImages

An important debate is brewing about free speech at the Olympics. After years of the International Olympic Committee restricting the free expression of athletes at the Games, some prominent athletes are calling for the unlimited right to speak freely — including the right to protest.

The advocates include Canadian decathlete Damien Warner, an Olympic bronze medallist in 2016, who has said: “If there’s something on their mind, then athletes should be allowed to speak.” The IOC, he said, is “on the wrong side of history.” The U.S. Olympic and Paralympic Olympic Advisory Committee takes a similar view.

In response, the IOC has relaxed its Rule 50 on “advertising, demonstrations and propaganda” to allow free speech in interviews and meetings, but has stood firm on the prohibitions against “political” statements on the field of play and during ceremonies. The committee threatens to punish any athlete who disobeys.

The IOC Athletes’ Commission supports Rule 50, saying it believes “the focus at the Olympic Games must remain on athletes’ performances, sport and the international unity and harmony that the Olympic Movement seeks to advance.”

But another of the recommendations from the Athletes’ Commission, following a survey and consultation process, was to “increase opportunities for athletes’ expression during the Games.”

In worldwide polling, Rule 50 has won the support of the majority of athletes for this position. The Canadian Olympic Committee Athletes Commission has reported that 80 per cent of surveyed athletes supported the rule.

The push for free speech is an artefact of growing athlete activism in recent years in response to racism in European soccer, the unrelenting police violence against Black people and other minorities in countries like the United States and Chinese human rights violations in Xinjiang, Tibet and Hong Kong.

For many years, Rule 50 completely prohibited critical athletes’ statements or demonstrations at games — and sporting bodies compelled their athletes to comply and athletes went along with it.

The style was epitomized by basketball superstar Michael Jordan, who famously avoided political statements “because Republicans buy shoes too.”

When the Canadian skier Laurie Graham likened herself to a cruise missile flying down the hill to a World Cup victory, I asked her not to use a metaphor of death and destruction for a peaceful activity like sport. She quickly agreed, which thrilled me. But then she said that she didn’t want to get in trouble with her sponsors, who told her to avoid controversy.

The Need to Speak Out

As a competitor in the 1964 Tokyo Olympics who wrote a widely syndicated student newspaper column from the Olympic Village, I fully support the right to free speech. I have always believed that athletes should take responsibility for the circumstances and sports in which they are involved and they cannot do that without the right to speak out.

Athletes should be able to wear personal signifiers, such as Indigenous sashes or rainbow fingernail polish, both of which have been allowed or banned from competitions and ceremonies at different times.

Free speech is an internationally established human right. It’s not something that should be conferred or denied by a vote. The majority should never be able to silence the minority.

The intercultural education cherished by the Olympic Movement would be enhanced by completely free speech. We can’t be hectoring others about what we believe, but we do need to be honest about who we are.

I’ve spoken in China about athletes’ rights. While few agreed with me, no one was shocked. They listened. So did I. The IOC should embrace and support such interactions and tell authoritarian hosts that this is what the Olympics are about.

What Will the Punishment Be?

If some athletes still decide to protest in Tokyo or at the 2022 Winter Olympics in Beijing and are punished, that punishment will become the issue. I would be horrified by a repeat of 1968, when the IOC expelled U.S. sprinters Tommie Smith and John Carlos from the Mexico Olympics for protesting against poverty and racism from the victory podium — in effect banning them for upholding the Olympic aspirations.

In the meantime, athletes like MacLennan, who regularly consults Canadian athletes, should take advantage of the opening provided by the IOC consultation to push for ongoing athlete engagement and athlete-centered reforms on an international basis — including much more significant athlete voice and vote on decision-making bodies. With all the challenges facing Tokyo and Beijing, it’s unlikely that Rule 50 will be reconsidered before both Games take place. But the issue won’t go away, and I would like to think the final restrictions will be abolished by the Paris Olympics in 2024.

Once in-person meetings resume, athletes should revive the former practice of open meetings in the Olympic Village where they can introduce and discuss the issues most on their minds — including the geo-political issues that buffet the Games.

If there was genuine opportunity for athletes to become involved in sport governance and public policy, there would be far less reason for them to demonstrate.

Pierre de Coubertin, the founder of the modern Olympic Games, always saw the Olympics as a pedagogical project and athletes as the self-actualizing subjects of their activity and learning. If athletes are to learn, they need to learn to deal with political and intercultural issues and when and how to speak out.

The IOC should embrace free speech as a contribution to its highest goals.

Tokyo Summer Olympics Will Go Ahead Even Under State of Emergency, IOC Official Says

What the Life of Jackie Robinson, Baseball&#8217;s First Black Player, Can Teach Us About the Long-Term Health Effects of Racism