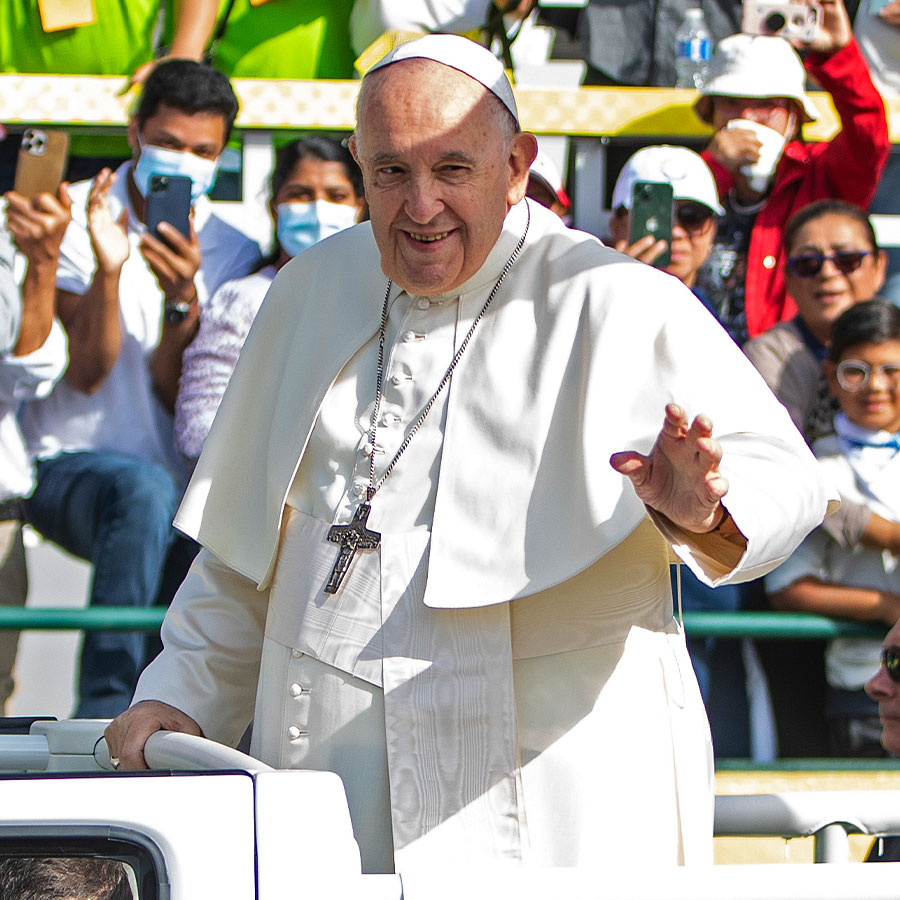 People gather to get a close look as Pope Francis arrives for mass in Edmonton, during his Papal visit across Canada on Tuesday July 26, 2022. Photo: Jason Franson/The Canadian Press

Pope Francis came this week to Maskwasic in central Alberta — where many Indigenous people, including survivors of residential schools and their descendants, had gathered — to deliver an expected apology in response to the Truth and Reconciliation Commission’s Call to Action No. 58:

We call upon the Pope to issue an apology to Survivors, their families, and communities for the Roman Catholic Church’s role in the spiritual, cultural, emotional, physical, and sexual abuse of First Nations, Inuit, and Métis children in Catholic-run residential schools.

I am the granddaughter of a Residential School survivor. I am the daughter of a First Nations woman who survived having each of her seven children stolen and relocated through the ’60s Scoop assimilation policy.

I spent more than 25 years searching for and locating not only my birth mother, but also all of my siblings who were spread across several provinces. I continue to fight to ensure that my nieces, nephews and young relatives know who they are — and that we are here because of the undeniable strength and perseverance of our ancestors.

What many Canadians don’t understand is that the struggles within Indigenous communities today are not cultural traits — they are symptoms of a people still struggling from the intergenerational trauma and horrors experienced through the genocidal acts and abuses that took place through the Residential School assimilation policy.

Is the Papal Apology Genuine?

Did the Pope’s apology truly address Call to Action No. 58?

Seven years later, and only due to the consistent persistence of Indigenous Peoples, Pope Francis agreed to apologize. But what did he apologize for?

Much like he did when an Indigenous delegation visited Rome earlier this year, Pope Francis apologized for “the ways in which many members of the church and religious communities co-operated” in the Residential School system.

This was not the Catholic Church taking responsibility for acts of genocide and spiritual, emotional and physical abuses. Apologizing for individuals versus the establishment that upheld not only the assimilation policy, but also protected — and continues to protect — the people who committed the crimes is horrifying at worst and an insult at best.

The Catholic Church not only upheld the government’s Residential School system, it used it to further its own religious agenda. It continues to protect Catholic officials who perpetrated criminal acts upon the children. Some of them are still alive to this day.

Canada continues to investigate and hold accountable individuals who committed war crimes during the Second World War. Where is the accountability for those who have committed crimes against Indigenous children?

Other Areas Where the Church Falls Short

After the discovery of unmarked graves of children who died while attending Residential Schools began receiving international coverage in 2021, the Catholic Church committed to providing $30 million to support reconciliation projects for survivors.

But its fundraising campaign fell short by nearly 90 per cent. The church claims it’s still working on a detailed plan.

Nonetheless, in 2016 it managed to raise and invest $128 million to renovate St. Michael’s Cathedral Basilica in downtown Toronto.

It holds records and requires Indigenous people to travel to Rome to access the documents. There are also suspicions some documents have been destroyed.

I would not be walking in my truth if I were not to acknowledge how the church has manipulated some Indigenous people.

It appears that the church feels its only responsibility was to listen to survivors share their stories of horror, and that in itself absolves it of any wrongdoings and releases it from any further accountability.

This is still being acted out today in ways that are extremely upsetting for me and many other Indigenous people. We saw it this week as the Pope was gifted sacred items from those who suffered abuses.

Sharing of gifts is a cultural norm for Indigenous Peoples. But to share sacred, ceremonial items that are intended to acknowledge people at the highest level for their contributions, wisdom and leadership is not only inappropriate, it’s deeply harmful for Indigenous culture and the future of our young people. Neither the Pope nor the church has earned these gifts.

It suggests that we don’t deserve reparations, accountability or reciprocity.

Time and time again, Indigenous people who have been displaced through assimilation policies and other colonization tactics tell me they profoundly desire opportunities to learn more about who they are, where they come from and to understand our cultures.

I have wiped their tears while they cry when they see Indigenous political leaders give away headdresses, pipes and drums as symbolic, performative gestures to those who continue to harm us.

To my relatives still struggling as you are finding your way back into the circle, I extend my deepest sympathies for the hurt you endured as you watched this happen again during the Pope’s visit. These behaviours must end, full stop.

To the broader community of people in Canada, know that reconciliation is not solely the responsibility of the state or an institution. It also falls upon the individual.

Reconciliation is how you guide conversations with your family while having dinner. It’s how you acknowledge the Pope’s apology and how you deepen the discussion to talk about what wasn’t said. It’s those conversations that will contribute to a future where everyone in Canada can thrive, including Indigenous Peoples.