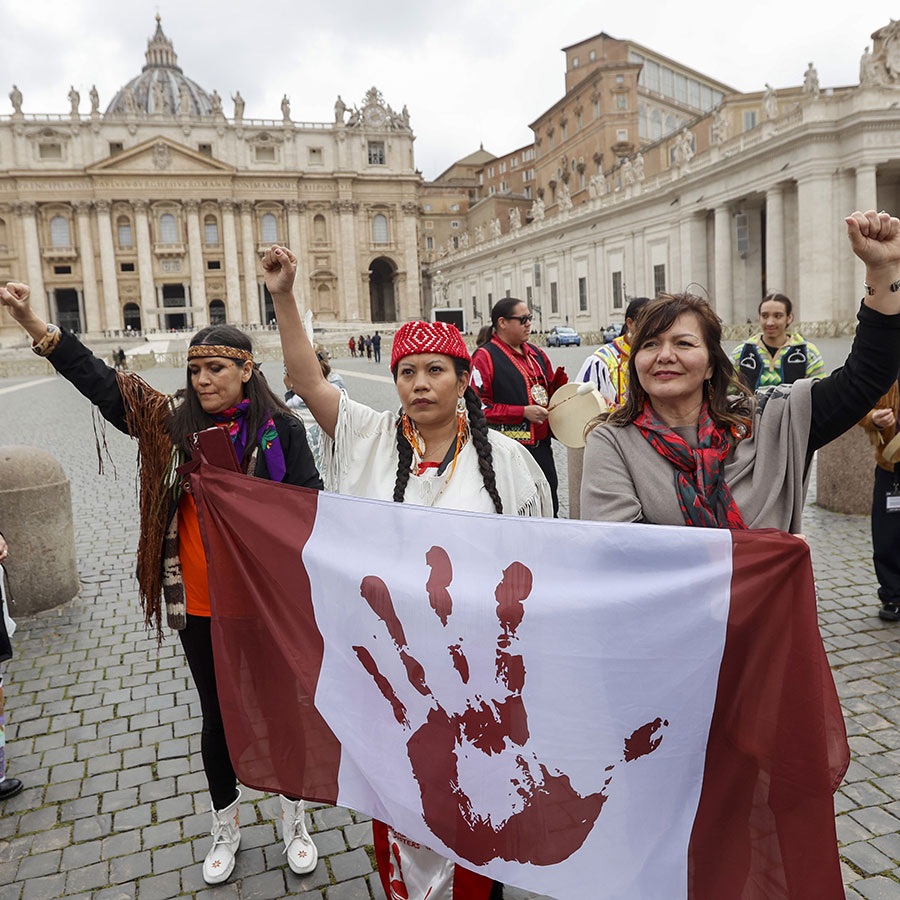 Members of the Indigenous Tourism Association of Canada and First Nations Assembly perform at Saint Peter's Square at the end of their meeting with Pope Francis in Vatican City, Vatican, April 1, 2022. After meeting with a number of Indigenous delegates, Pope Francis expressed sorrow and shame for the Church's role in the abuses suffered by indigenous children in Canadian boarding schools for 100 years. Photo: Riccardo De Luca/Anadolu Agency via Getty Images

“We call upon the Pope to issue an apology…” — Truth and Reconciliation Commission, Call to Action 58.

Pope Francis’ upcoming trip to Canada will again provide an opportunity for him to listen to and speak with Indigenous people. The visit relates to the Roman Catholic-run residential schools where First Nations, Métis and Inuit children were taken from their families, with many subjected to multiple abuses and some never making it home.

In April 2022, the Pope offered an apology to a delegation of survivors in Rome, however it remains to be seen whether he will expand on that apology to survivors and communities when here.

A key question we should be asking during his upcoming visit is: How will an apology contribute to healing, or will it just deepen distrust in the church?

I hope to address this question by briefly looking at the complex and tense relationship between Indigenous communities and organized religion. As a Mohawk who was raised in the Catholic tradition and an academic at a theological school, I’m in a unique position to interrogate this question and have this conversation.

Before European settlers arrived in Canada, Indigenous communities were able to easily maintain their own spiritual beliefs and practices. But as more and more settlers arrived, missionaries from various denominations began to interact with Indigenous people, intending to convert them to Christianity and “civilize” them.

These activities, however, were not applied uniformly. By now, most people know about the church’s role in Indian Residential Schools, but other conversion strategies were also employed.

In Protestant traditions, many favoured “assimilationist strategies,” which pressured Indigenous people to adopt the cultural norms of colonists. Some Christian missionaries used methods that accepted the inclusion of few traditional medicines and trickster stories, others encouraged the following of Jesus without any coercion, allowing Indigenous people to make their own choices.

Through the work of evangelists, many Indigenous people entered into this new faith. The mission was further advanced when some of these new converts worked to persuade their own people to accept Christianity. One example is Rev. Peter Jones, or Kahkewaquonaby (Sacred Feathers).

In the early 1800s, Jones lived among Mohawk Christians in Davisville, Ont. In a book based on his own writings, Sacred Feathers, he wrote: “they appeared to have bridged the division between Christianity and their old Indian faith ….” Jones eventually joined the Methodist Church and dedicated his life to sharing “the good news with his people.”

For many Indigenous people, the bond to Christianity wasn’t simply an “us versus them” situation (and still isn’t), as faith successfully took root in many communities.

“Indigenous Perspectives on the Church”

It’s important to note that there isn’t one Indigenous perspective when it comes to the church (or any other matter). While each nation will have its own worldview, there are individuals within these nations who each have their own experiences, which leads to differing opinions and approaches.

Waziyatawin, a Dakota professor and activist, views Christianity as uncompromising. Referring to the biblical verse John 14:6, “I am the Way, the Truth and the Life …,” as challenging, she says it “disallows the possibility of multiple, equally valid, spiritual truths and renounces all other traditions as, at best, incomplete and in need of fulfilment, or misguided and in need of correction.”

After the news of unmarked graves being found at former Indian Residential Schools began to surface in 2021, there were numerous incidents of churches being burned. While many applauded the actions, others, despite their own dislike of the church, condemned them.

“I can understand it, I don’t like the church. I don’t believe in the church. Many residential school survivors hate the church with a passion — but I have never heard any of them ever suggest people turn to this.”

To this day, Indigenous voices continue to be active in the church communities. This is evident with the existence of the Anglican Council of Indigenous People within the United Church; NAIITS (formerly the North American Institute for Indigenous Theological Studies), an organization that encourages Indigenous people and communities to advance their own perspectives on theology and practice; and the Sandy-Saulteaux Spiritual Centre, an educational school that prepares students for Indigenous leadership roles in the church.

There are varying degrees of Indigenous participation within religion across Canada. And it would be fair to say that within these circles, there may be challenges with being part of an organization that contributed to the loss of language, culture, family and community relationships.

It is reasonable to expect that any apology from the Pope will be met with mixed responses. Some will adopt a “wait and see” approach, while others may fully accept or reject it.

The apology may promote healing for some while others may claim it is too late. Regardless of the voice, there is one certainty: the impacts for those receiving the apology will be significant.