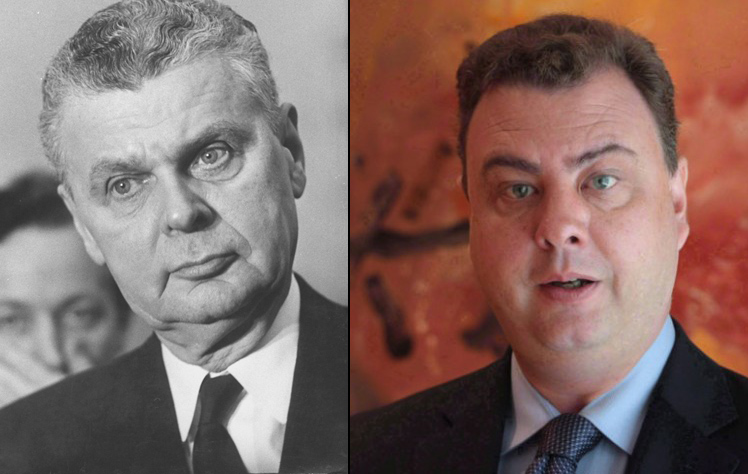 When George Dryden Diefenbaker died on Sunday in the aftermath of a suicide attempt, he was 47-years old — another statistic in the peak suicide rate among white men aged 45 to 49.

The middle age crisis that strikes men in their mid-40s to early 50s is often linked to a search for identity.

George Dryden Diefenbaker ended his life convinced that it would end soon anyhow, from pancreatic disease, which he attributed to years of alcohol abuse.

And yet, few men have suffered an identity crisis as keenly and painfully — and publicly — as George Dryden Diefenbaker.

When he was 42, he heard about a longstanding family rumour that he was actually the son of former Prime Minister John Diefenbaker, and not the man he knew as his father.

It was said that his mother, Mary Lou Dryden, had had an affair with Diefenbaker shortly after her marriage to federal Liberal politician Gordon Dryden. She would have been in her 30s at the time while her lover was in his 70s.
As George Dryden matured, there was indeed a striking resemblance to the former prime minister, who died in 1979, supposedly childless.

In fact, DNA testing showed that George was not the biological offspring of Gordon Dryden who died in 2013 at the age of 86.

George persevered in trying to prove that Diefenbaker was his father but the Diefenbaker family rejected his efforts, refusing to supply any samples for DNA testing.

However, in 2012, Canadian Press reported that a private investigator hired by Dryden had collected a Q-tip covered with sticky ear wax that one of the Diefenbaker relatives had tossed away.

Dryden said it revealed a genetic link to the Diefenbaker family.

The sample was not enough to prove conclusively he was the former prime minister’s son, but Dryden said it showed he was a Diefenbaker by blood.

He then added Diefenbaker to his name legally and became known publicly as “Diefenbaby”.

In this question of paternity, of being born to a husband and wife while being fathered by the mother’s lover, George Dryden was also a statistic.

“It’s now widely accepted among those who work in genetics that roughly 10 per cent of us are not fathered by the man we believe to be dad,” reported the Globe and Mail in 2002.

A senior scientist in the genetics department of the Hospital for Sick Children, Steven Scherer told the paper at the time,

“It is probably true in a lot of families, that daddy is not who you think it is.”

For George Dryden, the discovery that his father was not who he thought it was, left him incomplete. His quest for a father ended only with his death.

He was never accepted by the Diefenbaker family and his actions caused a complete rupture with the Dryden family.

They prevented him from seeing his ailing mother and for many months kept the news of his father’s death from him.

But in the weeks before George died, he travelled to Saskatchewan to meet the sons of another man said to be conceived by John Diefenbaker. Their match in DNA and similarities gave George a measure of comfort. Together, the men who regarded themselves as uncle and nephews visited the grave of the man they considered their patriarch.

Merry-Ellen Unan, a longtime friend of Dryden who was with him when he died, described him to Canadian Press as “very much a lost soul.

“He was searching most of his life for his identity. He truly didn’t know who he was.”

Dryden said in his last interview a week ago with Canadian Press that both names, Dryden and Diefenbaker, would be written on his tombstone.

“I didn’t have a bad life,” he said “I basically ended up killing myself.”