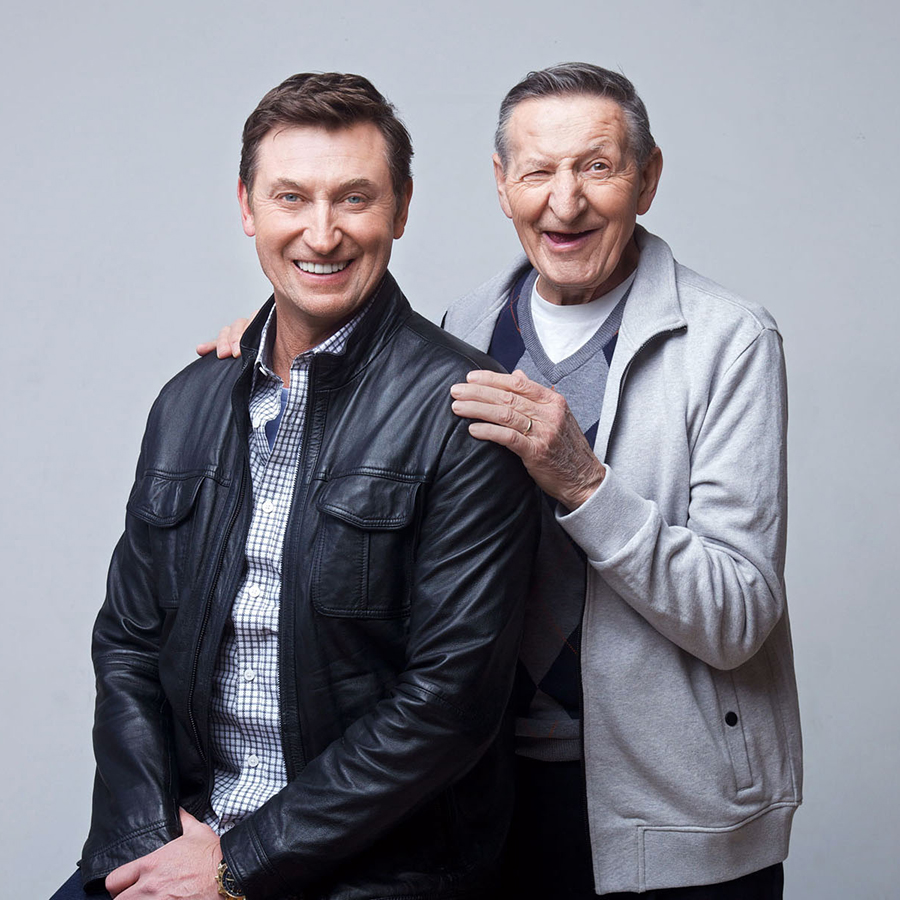 Wayne and Walter Gretzky, photographed in Toronto in 2016 during a cover shoot for Zoomer magazine. Photo: Tobin Grimshaw

Walter Gretzky, Canada’s most famous hockey dad, has passed away at the age of 82.

Walter, best known as the father of hockey superstar Wayne Gretzky, died yesterday after a long battle with Parkinson’s disease. NHL commissioner Gary Bettman said Walter Gretzky “embodied all that is great about being a hockey parent.”

Wayne Gretzky and his wife Janet tweeted a statement about their loss, saying that Walter “bravely battled Parkinson’s and other health issues these last few years, but he never let it get him down.” Referring to his dad as the Gretzky family’s “team captain,” Wayne said that Walter “was the reason I fell in love with the game of hockey. He inspired me to be the best I could be not just in the game of hockey, but in life. He truly was the Great One and the proudest Canadian we know.”

Walter was born in Canning, Ont., in 1938 into a family of Belarusian immigrant farmers. He grew up playing hockey, starring for local teams, but as a teenager realized he didn’t have the size to make it to a higher level. Putting his own hockey aspirations to the side, he got a job installing and repairing telephones lines for Bell Canada, eventually settling in nearby Brantford where he married Phyllis Hockin and began a family.

He and Phyllis, who worked as a waitress, raised five children — Kim, Keith, Glen, Brent and, of course, Wayne. Not only did the elder Gretzky instill in his children the importance of respecting others and living a clean life, but he passed down his abiding love for Canada’s national sport.

“The thing I’m most proud of is the fact that apart from being a great hockey player, Wayne’s a great person off the ice. As a parent, that’s what you most want to be able to say about your kids,” wrote Walter in his memoir: Walter Gretzky: On Family, Hockey and Healing.

Like many hockey dads of his generation, every winter Walter would flood a rink in the backyard of their modest home, which he remained in long after his son achieved wealth and fame. And while “Wally’s Coliseum,” as it was called, was ostensibly a way to give the kids something to do in winter, it became a practice rink for young Wayne — where he worked on his puck-handling skills for hours, setting the groundwork for his later greatness.

“He would be out here hour after hour twisting in and out between pylons we made from Javex bottles,” Walter said in an interview with the Globe and Mail, “He used to tie a can off a string and hang it in the net and see how many times he could hit it. He used to pay kids a nickel or a dime to play goalie for him.”

Walter would spend hours on the rink, coaching his kids on how to play the game the right way. Wayne, of course, parlayed these early outdoor hockey sessions into a glorious NHL career, but brothers Keith and Brent also graduated form Wally’s Coliseum and eventually made it to the pros.

Besides flooding a backyard rink, Walter followed a path familiar with all hockey parents — waking up at the crack of dawn on Saturday mornings to drive his kids to early practices, drinking coffee in freezing small-town arenas and providing words of encouragement and emotional support every step of the way.

He also became a legendary figure on the Brantford minor hockey scene, where he  remained heavily involved as long as his health allowed him. A cheerful volunteer with an unfailing sense of humour and goodwill, he signed autographs, shared war stories with other hockey parents, coached, ran tournaments and fundraised for the sport long after his kids had grown up and moved on.

But it was his close relationship with his son that endeared Walter to so many Canadians. Throughout Wayne’s decorated career, Walter was a familiar presence at his side. Hockey fans across the country got a glimpse of the close father-son relationship and the genuine love and respect the two shared for each other.

“He’s a remarkable person,” said Wayne in a Zoomer cover story for the October 2016 issue, in which three generations of Gretzkys — Walter, Wayne and Wayne’s son Ty — all appeared on the cover. “He gets around pretty good and still likes going to Leaf games and getting out, and people love seeing him,” said Wayne, who always doted on his father during public appearances.

The love many Canadians had toward Walter was made profoundly evident by  the outpouring of affection on social media, with politicians, sports figures and celebrities expressing condolences and countless everyday people recalling encounters they had with the famous hockey dad at local hockey tournaments, charity fundraisers, coffee shops or at Toronto Maple Leaf hockey games — which he regularly attended until recently.

In 1991, Walter suffered a stroke that not only left him physically impaired but also wiped away the memories of his son’s brilliant career and the immense role he played in it. However, through sheer willpower and determination, Walter battled back and, while he still suffered from the physical after-effects of the stroke, he was able to recapture the memories. The story of his amazing comeback was made into a movie in 2005 called Waking Up Wally: The Walter Gretzky Story.

Walter was most proud of being awarded the Order of Canada in 2007.  The text explaining why he was named said it all — “for his contributions to minor hockey in Canada and for his dedication to helping a myriad of local, provincial, and national charities.” He seldom turned down an opportunity to raise money for worthy causes, especially Heart & Stroke and the CNIB.

And despite the immense fame of his son and the fact that he became a celebrity in his own right, Walter never let it go to his head.

“I’d say more than anything we are ordinary people who have had some extraordinary things happen to us,” he wrote in his memoir. “I’m just a guy who grew up on a farm, worked for Bell Canada for 34 years and raised a sport-loving family in a small Canadian town. It doesn’t seem very remarkable.”