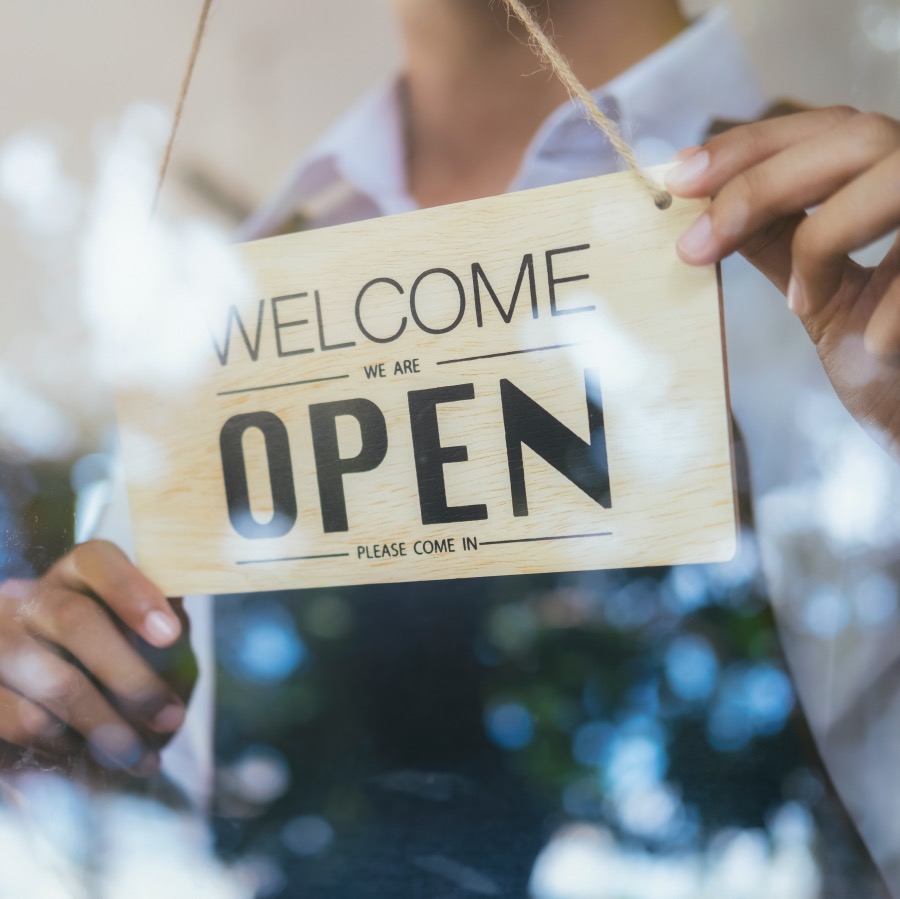 Small business owners report a recent increase in sales, but a full recovery depends on whether or not Canadians will shop locally. Cavan Images/Cavan via Getty Images

The worst of the COVID-19 financial misery might be over for small business owners, but there’s still a long way to go until they start seeing a profit. And while shopkeepers are working feverishly to welcome back customers, there’s a growing worry that many won’t be able to keep their doors open much longer.

The past few weeks have seen the small businesses that line our main streets and add character to our communities allowed to re-open. And while that should mean good news, owners remain cautiously optimistic.

It’s not business as usual, of course. Far from it. Restaurants and bars can only partially re-open their indoor seating due to physical distancing measures. Stores must also limit the number of customers allowed on the premises and impose other restrictions that mean stores can’t reach their full selling capacity.

Moreover, even though the doors are open, customers haven’t come flooding back. Many of us, it seems, have grown used to buying our goods from online retailers. This habit, unless it changes, poses very bad news to those who operate brick and mortar stores.

“Many of us want to live in a neighbourhood that has cool shops and interesting restaurants,” says Dan Kelly, president and CEO of the Canadian Federation of Independent Business, an industry group that advocates on behalf of the millions small- to medium-sized businesses that have been battered and bruised by the spring economic shutdown.

“But these stores are not just props to make a community look nicer,” he says. “There are families behind every one of those doors who are trying to make a living and support their employees. If Canadians don’t patronize these businesses, they’re just not going to be there.”

But Kelly warns that if these businesses, regardless who runs them, don’t turn the corner soon, Canada’s economic recovery will falter. “Small or medium firms represent 60 per cent of employment in Canada,” says Kelly, “and about half of our GDP.” Without doubt, the economic engine won’t function normally if its major cog, the small business sector, isn’t working.

Amid all this grim news, there is one beacon of hope. At least the stores can now open. “In the worst of the lockdown, only 20 per cent of small companies were fully open,” says Kelly. “Now, it’s two thirds.”

Kelly adds that the CFIB’s July Business Barometer shows an uptick of optimism in business performance as well as the state of the overall economy.

“Yes, there is a higher level of optimism now than in the spring,” says Kelly. “But it’s held back by a lot of worries.” The leading cause for concern is a potential second wave of COVID-19 that might lead to another punishing round of business shutdowns. “Gosh, no one wants to see that,” he says.

Kelly suggests that owners are welcoming some of the government relief measures, such as interest-free loans (CEBA) and the wage subsidy, which has been extended until December. However, a number of business owners don’t qualify for the loans, particularly those who are self-employed or sole proprietors. “The government promised to fix that in mid-May,” says Kelly. “But there are still thousands of business owners that are not able to access government support.”

Another source of frustration for owners is the rent subsidy program (CECRA), a hugely important program that is supposed to provide rent relief for businesses affected by the lockdown.

Kelly says that for a small business to get rent relief, the landlord has to apply for a loan on the firm’s behalf. So it’s entirely up to the landlord whether they wish to participate or not. On top of this, the landlord must agree to take a 25 per cent cut in their rent.

“Many small businesses that qualify for the program are being told by their landlord that they’re not going to play ball,” says a frustrated Kelly. “It’s a complete mess,” he says of CECRA. “It failed on launch.”

While the painfully slow process of recovery has begun, there’s still a long way to go. Right now, two-thirds of businesses are open, but only 26 per cent are reporting normal sales. Another 25 per cent say their sales are down 50 per cent or more.

“Most businesses are telling us they are losing money everyday they are open,” says Kelly, noting that some have had to re-mortgage their home or put the payroll on their credit cards just to stay afloat. And he notes that the average debt per business due to COVID-19 is $135,000.

“Many owners are evaluating their future. There’s a lot of worry out there. How long can they continue?” he asks. The CFIB estimates that more than 100,000 owners will have to close up shop forever by the end of the year.

Besides the government relief programs, the CFIB has launched its #SmallBusinessEveryDay social media campaign to encourage Canadians to shop locally. More than 40,000 people have taken a pledge to direct more of their dollars toward local independents. And financial companies like American Express, Visa and RBC have launched programs to encourage people to think about local options before ordering online from a major retailer.

So when will businesses return back to normal? That the question Kelly is asked numerous times, and that proves difficult to answer. “This virus may be around for a while, and we need to figure out pathways to do businesses,” he says.

And while a vaccine might end the hesitancy Canadians have of going and spending money at local businesses, it’s not here yet.

“We can’t just wait until the solution and then hope everything will go back to normal,” says Kelly. “We have to find ways to operate while COVID is with us.”

Green Tape Everywhere: It Will Take Time to Get Used to Post-Pandemic Shopping