Functional and Stylish Ways to Upgrade Your Home Office 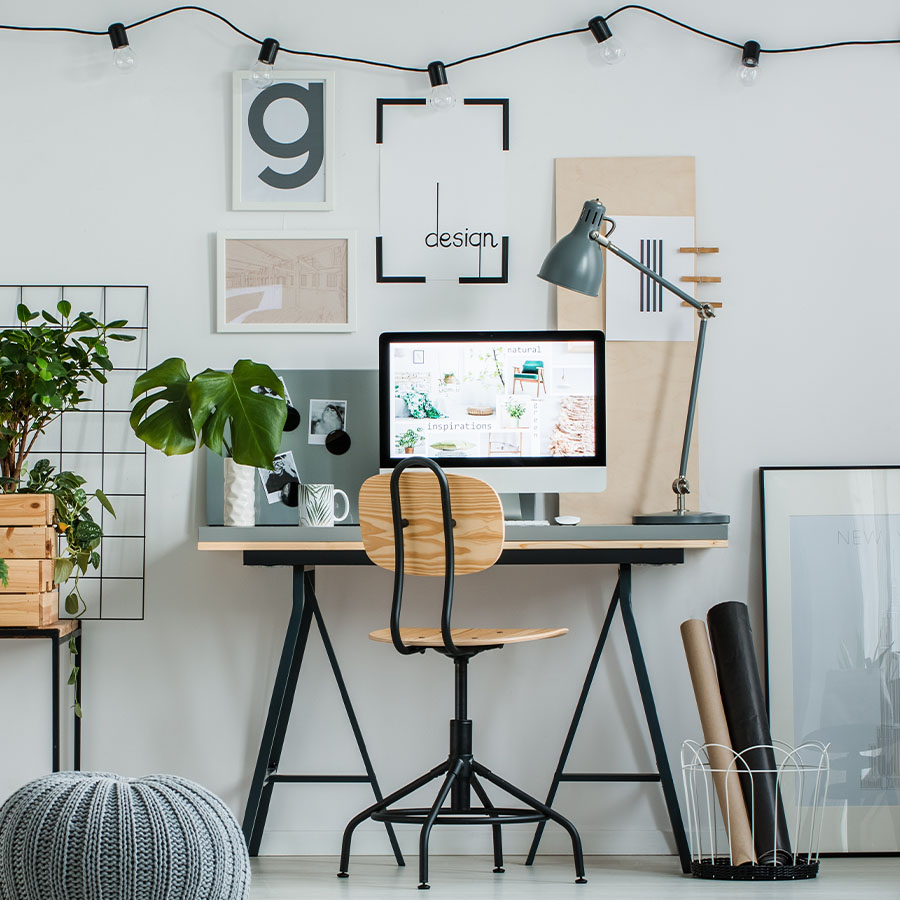 Try these simple updates for better productivity, comfort and dare we say, happiness, for working at home.Photo: KatarzynaBialasiewicz/GettyImages

I saw a tweet recently that said if computers and the internet had been invented first, there would be no offices.

Those of us lucky enough to be able to do what we do at home have been doing a lot of it over the past year. Some of us have made do, some of us have flourished, some of us can never imagine going back to an office ever again.

But all of us got where we are today by the seat of our pants. In the middle of March, we figured we’d be taking a few days off. By the beginning of April, we set ourselves up at the dining room table and asked people to be quiet because we had a meeting. By the end of the month, if we had another room with a door, we claimed it — whether it used to be an exercise room or a den or a playroom. We weren’t going back to the office right away, so we’d need a couple of things. A printer maybe, because who has one of those at home?

But as weeks dragged into months and months got spread out into a year, this cobbled together accretion of needful things is starting to look like what it is, a short-term solution to a long-term problem. For most of us in this position, whether we ever end up going back to an office or not, the home office is here to stay. Maybe we’ll go back three days a week. Maybe we’ll just go back for meetings. Even if we go back full time, we are now accustomed enough to full-time work at home that the home office we use for the occasional bit of whatever we’re doing evenings and weekends will likely have to live up to new expectations.

I’ve been working from home for 15 years, but even I have had options. I used to go out to cafés, sometimes restaurants, occasionally bars, and often hotels. My workdays would be spread out, my work habits mobile. They have not been for 13 months now. I learned slowly, maybe more slowly than most, that there are things you absolutely need to work effectively, comfortably, with a modicum of mental and emotional equilibrium from home over the long term.

I’d like to share those with you, in the reverse order to which I discovered them myself, because I did it all wrong.

A Game-Changing Computer Monitor (or Two)

I had no idea.

If you are not a gamer or a day trader on multiple markets, you may not have realized the sheer beauty and game-changing awesomeness of a multiple-monitor life. Because I’ve travelled, and gloried in my ability to work in cafes, mine has been a laptop life. And not one of these big fancy laptops either, with 16 or 17 hard-to-lug-around inches, but 11 – 13 inches tops. And it’s always been fine. Good, even. If I have Word and a Chrome tab open at the same time, I can write in 5-inch columns no problem. And if I need another tab, maybe a Google Docs with a second set of interview notes, I can make it into a little square in the corner and that’s fine. Not ideal, but did I mention that I used to get to work in cafés, where sometimes they had cake? So, a more-than-adequate trade-off.

You may not use Slack, but if you’re working from home, you’ve got something like it, and even if you don’t (lucky you), you’ve got Zoom or Meet or Teams or Cisco Webex that demands another screen be open while you also continue work on your document or spreadsheet or editing suite.

And then this beauty walked into my life. The LG 38” curved screen. It’s also QHD (quad high definition), or 2K, which is one of those things you want to be careful with, because once you go there, it’s hard going back.

I am an extremist in all things, so I did not dabble with a reasonably sized second monitor. And why should I, when this exists? I am told it is curved to create a more immersive gaming experience. I have not gamed since I took up World of Warcraft to try to conjure up a new thing to share with a boyfriend who was drifting into someone else’s life. (It didn’t work, though I remember Palomar my level-70 damage-dealing paladin and his quests through Azeroth with fondness and pride.) But I can tell you, the curve works for work, too, diminishing the need to move your head around to get past glare at the edges. It also swivels, which means when the day is done, it can turn its gaze towards me as I move over to a couch with my after-work Gibson and recline into a better version of Snowpiercer than my TV can give me.

Now I’ve got about 12 inches for Slack, 12 inches for a content management system, and my laptop screen for keeping up with Google Analytics or a provincial press conference telling me how much longer it’s going to be before I can work in a café again.

Not just an external monitor, but a wide-screen external monitor (not necessarily curved, but mine is cool), is one of those things I thought only specialists needed. But for those of you old enough to remember what you thought of cellphones when they were the size of your forearm and only American Psychos used them, maybe they used to be, but now, they’re just necessary. I just got a second one, 24 inches. That, strictly speaking, may have been unnecessary. I’ll get back to you on that.

Early on in the Age of Zoom, I started to notice that some people looked better on calls than others. At first, I thought it was about cameras. And then I noticed the ring in their eyes. And then I started noticing them everywhere, from those in-house talk show appearances to people doing their shows on Instagram Live. Everywhere that someone looked like they were well put together online had that tell-tale ring of light visible in their irises. There are ones that are better for average video calls, like the Roto Neo 2, better for selfies (like Westcott’s 18” bi-colour with a large tripod), ones that clip to your phone for walkabout WhatsApp and Facetime calls like this Polaroid, and bigger outfits, like this 14” kit from Ikan, that make sense when you’re creating presentations or other kinds of videos. You can also get ones, like this 8” Smoovie, that light up in different colours, just for fun.

I picked the Neewer 6” because it’s inexpensive (I got mine for about $35), came with a tripod, can sit on my desk and peak out from behind my laptop or monitor.

Immediately, people started to comment about how much better I looked than they did, that I must have a new computer, etc. A ring light doesn’t just make you look prettier, it makes you more presentable. It’s the work-from-home version of straightening your tie or accessorizing with care. It’s one of the things that sets you apart, and it’s one of the things whose absence can set you back.

Upgrade Your Chair or Cushion

I was late to this one, too; mostly because I’d move around, switch locations. But these days, hours in the same seat is the norm, and a pulled-up kitchen chair, or even that wheelie “office” chair you used at your desk, is no longer good enough. You need to do one of a couple of things. You either need to get one of these Purples, for about $150. Or you need to get one of these Aerons, for about $1,500. You knew this already; I knew this for years before I got mine. I don’t have a bad back, I am flexible, I have never needed lumbar support, but the weight redistribution both these options offer is remarkable. Even if you can sit for hours on a wooden chair, either of these options makes a bigger comfort difference than I’d previously given them credit for, and make the difference between getting up after a morning’s or a day’s work with or without one of those distressing sounds that means you had no idea how uncomfortable you’d actually been for the previous several hours.

There are great headphones. And wired buds can be more stable than cheaper wireless buds. I’ve tried a lot of different audio set-ups, from a pair of these SMS ones (which are apparently now collector’s items) to Beats Solo Pros to wired buds like these inexpensive Skullcandys to a thoroughly decent older model of wireless Defuncs that I used for quite a while, and an apparently discontinued, awesome, but ridiculously expensive Shure wireless noise-cancelling buds that they are descended from. But I’ve had three pairs of Jabras, and they’re the best I’ve met. They’re electronically stable, they sit well and unobtrusively in the ear so they’re physically stable enough to take with you cycling; the audio’s good, the bluetooth connection is smooth, and the case is compact and efficient. (They’re also over $200.)

In-ear buds are a little like ring lights in the presentation department. No matter how good or how cool your headphones are, they’re still a big chunk of nonsense on your head.

I’ll make this an addendum because it’s not something I actually do. I live alone for the moment in a furnished apartment with nothing to clutter it up, so my actual background when I’m on Zoom is just fine. But that’s obviously odd. So if you want to look into the finer points of getting a video call background that will obviate the necessity to tell your half-clothed mates not to walk behind you to get something from the fridge while you’re on a call, or have to worry about what you’ve left out that might show up behind you when people’s eyes wander, there’s this remarkably detailed tutorial on how to choose backgrounds based on the shades you wear, your hair colour, whether gesticulate a lot during a call. There’s a lot to consider, though the good news is, even the best backgrounds are free and easily accessible.

Tips for Starting Your Own Business During a Pandemic — and Beyond