Is Bringing Back Home Economics the Answer to Our Modern Woes? 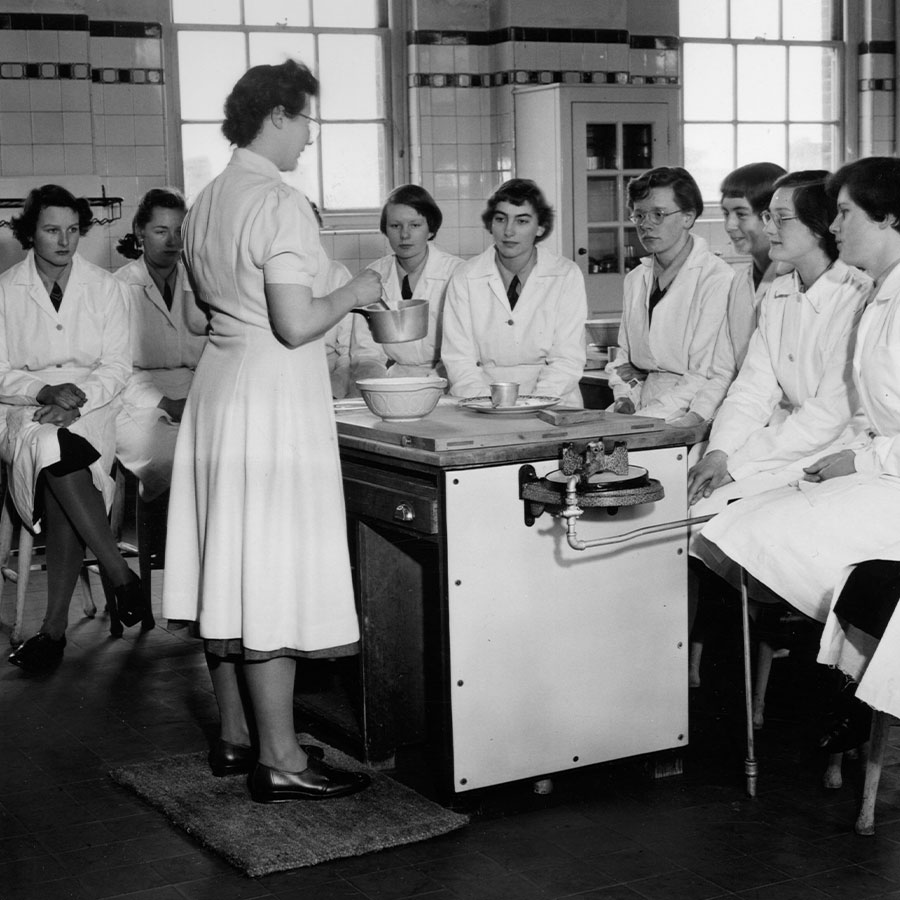 Girls in the lower fifth form of the school at Christ's Hospital, Hertford, are given a home economics lesson on March 3, 1953. A pair of experts from Mount Saint Vincent University say the call for a return to home economics in the education system to address problems like food literacy over-simplifies the field. Photo: Harrison /Topical Press Agency/Getty Images

Bringing home economics back to elementary and secondary school curriculum is a repeated solution to a host of modern woes.

It’s true that home economics comprises an array of skills that are important to everyday life — like food and financial literacy, both of which have been in decline among Canadians for decades.

And while reinstating home economics classes to teach young people about cooking and nutrition may seem like an obvious means to addressing these modern woes, we ask: Do advocates know what they are saying when they call for the return of home economics?

We don’t think so.

Based on our ongoing research we believe that calls to reinstate home economics as a solution to modern woes reduce the field to a set of practical skills, undermining its breadth and complexity, as well as the contributions of women home economists who have long-fought for recognition for themselves and their work.

What is Home Economics?

What comes to mind when you hear home economics? For many, it’s a stereotypical image of kitschy, apron-clad, starched ladies praising the virtues of a spotless kitchen, carefully planned dinner parties and from-scratch family meals.

Despite its pervasiveness, this stereotype is grossly inaccurate and supports institutional sexism that historically constrained the field and home economists’ work, and motivated the closure of post-secondary home economics programs across Canada and the U.S.

Ironically, and contrary to widespread stereotypes, home economists have publicly advocated to politicize and garner respect for household labour, and greatly expanded opportunities for women in higher education and paid employment that were intended to take them out of the home and into public life.

Home economists were among the first to support, and in some cases successfully lobby for, several public policy changes that we take for granted today — like basic food safety legislation, access to health information and reproductive rights that were vital to the everyday lives of women and their families.

Throughout the 20th century home economist-scholars developed a rich theoretical and interdisciplinary conceptualization of the field that shaped practitioners’ knowledge, skills and commitment to their work within Canadian communities, education and politics.

Home economics has always been so much more than food skills.

But by singling out food skills, calls to bring back home economics reduce and trivialize much of the important work, accomplishments and aspirations of the women home economists who pioneered the field.

These calls leave deeper underlying problems unaddressed, namely the sexist undervaluing of feminized domestic work, that is still largely done by women, that contributed to the end of mandatory home economics classes in the first place.

Calls to bring back home economics reflect reductive stereotypes of the field and undermine women home economists’ hard-fought struggles for recognition of their work as women and professionals.

Euthenics and the Science of the ‘Good Life’

Another problem that troubles calls to bring back home economics is that they unwittingly double down on individualistic solutions to what are structural problems, as well as racist and anti-immigrant views that were embedded in the fields’ ideas about the “good life,” or what it means to eat, cook and live “right.”

The founders of home economics championed euthenics, the science of controlling one’s environment through refined and gracious living as a means to a better life and improved human development. The principles of euthenics were based in white, Eurocentric, upper-class values and culture, and were intended to preserve the erroneously presumed superiority of white people.

Some have noted that these values and culture resound in the contemporary health and food movements from which calls for home economics’ return are often issued.

In other words, calls for the return of home economics’ carries often unexamined baggage about what and who counts as “good living.”

Ultimately, bringing back home economics could provide opportunities for youth to learn valuable life skills. Yet, as the women who founded and developed the field intended, such skill-focused learning must be accompanied by lessons about the wider historical, social, political and cultural understandings of food, cooking, health, nutrition and household work.

COVID-19: We Need an Ethical Compass For Fixing Long-Term Care in Canada