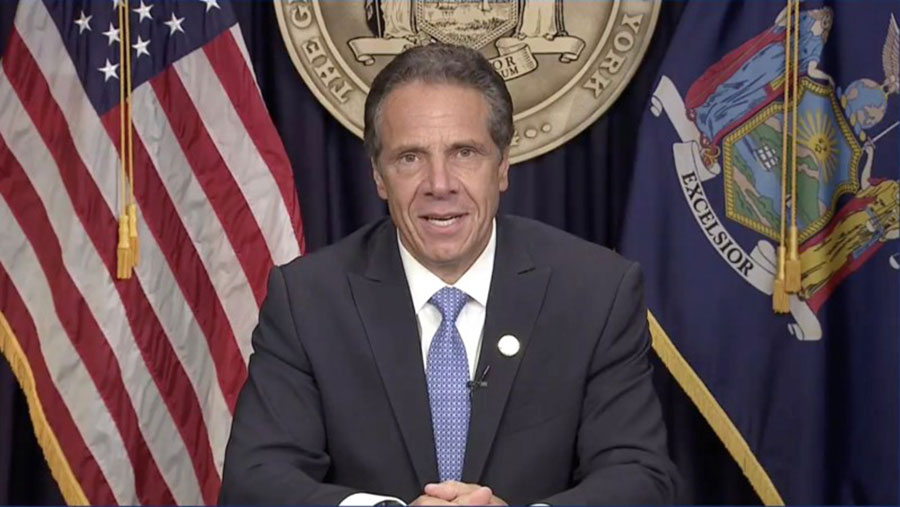 New York Governor Andrew Cuomo makes a statement as he announces he will resign in this screen grab taken from a video released by the Office of the NY Governor on Tuesday. Photo: Office of Governor Andrew M. Cuomo/Handout via Reuters

New York Governor Andrew Cuomo resigned on Tuesday following an inquiry that found he sexually harassed 11 women, mounting legal pressure and demands for his departure by President Joe Biden and others, a startling downfall for a man once seen as a possible U.S. presidential contender.

Cuomo, a Democrat who had served since 2011 as governor of the fourth most-populous U.S. state, made the announcement after New York Attorney General Letitia James on Aug. 3 released the results of a five-month independent investigation that concluded he had engaged in conduct that violated U.S. and state laws.

The investigation, detailed in a 168-page report, found that Cuomo groped, kissed or made suggestive comments to women including current and former government workers — one a state trooper — and retaliated against at least one woman who accused him of sexual misconduct. Cuomo denied wrongdoing.

Lieutenant Governor Kathy Hochul, a Democrat from western New York, will take over as governor of the state of more than 19 million people until the end of Cuomo‘s term in December 2022 as outlined in the state’s constitution, becoming the first woman to hold the post.

Cuomo‘s resignation marks the second time in 13 years that a New York governor has stepped down in scandal, after Eliot Spitzer quit in 2008 over his patronage of prostitutes. Cuomo also became the latest powerful man taken down in recent years following the rise of the #MeToo social movement against sexual abuse and harassment that has shaken politics, Hollywood, the business world and the workplace.

His resignation spared Cuomo from possible removal from office through impeachment proceedings in the state legislature. An ongoing impeachment investigation had only promised to intensify.

Cuomo, 63, was elected to three terms as governor, as was his late father, Mario Cuomo. He previously served as U.S. Department of Housing and Urban Development secretary from 1997 to 2001 under former President Bill Clinton.

Like his father, Andrew Cuomo never ran for president despite speculation about his possible national ambitions. He gained national prominence last year early in the COVID-19 pandemic after delivering daily news conferences as his state became the U.S. epicenter of the public health crisis.

The civil investigation found that the actions of Cuomo and his senior advisers violated multiple state and federal laws, but James did not pursue criminal charges. Local prosecutors are free to do so, meaning Cuomo still could face legal jeopardy.

Local prosecutors in Manhattan, Nassau County, Albany County and Westchester County said after the report’s release that they are looking into the matter and have requested evidence from the independent inquiry. New York City’s mayor said Cuomo should face criminal charges.

Cuomo had for months denied mounting allegations of sexual harassment – and renewed those denials after the investigative report was issued. But what was left of his political support crumbled after the findings were made public. Hours later, Biden – a friend of the governor for years – told reporters at the White House https://www.reuters.com/world/us/white-house-calls-cuomo-findings-abhorrent-says-biden-will-address-later-2021-08-03: “I think he should resign.”

Other prominent Democrats including the state’s two U.S. senators, Chuck Schumer and Kirsten Gillibrand, and U.S. House of Representatives Speaker Nancy Pelosi also lined up in calling on the party’s one-time star to resign.

Investigators concluded that Cuomo and his aides created a “toxic” and “hostile” workplace in an office gripped by bullying, fear and intimidation. The complaints about sexual harassment emerged after broader criticism by Democratic politicians in New York that Cuomo governed through intimidation.

Cuomo last year appeared to be a politician in ascent, presenting himself as an authoritative figure in televised news conferences on the pandemic. His image was burnished by television interviews with his younger brother, CNN host Chris Cuomo.

Shortly after James, a fellow Democrat, detailed the findings, Cuomo, the divorced father of three adult daughters, issued a video statement in which he said, “I never touched anyone inappropriately or made inappropriate sexual advances.”

“That is just not who I am,” Cuomo said in the video, as he argued that what women described as sexual advances were inoffensive gestures and comments inspired by a natural physical warmth arising from the culture in which he was raised. In the video, he indicated he had no plans to resign, mentioning specifically the fight against the pandemic.

A Marist Poll released a day after the report was issued showed that 59% of New Yorkers wanted Cuomo to resign, compared to 32% who said he should serve out his term and 9% who were unsure. Among Democrats, however, only 52% favored resignation.

(Reporting by Jonathan Allen and Joseph Ax; Writing by Will Dunham; Editing by Daniel Wallis and Howard Goller)