Trouble In Paradise? Or Is It Just Low Blood Sugar? 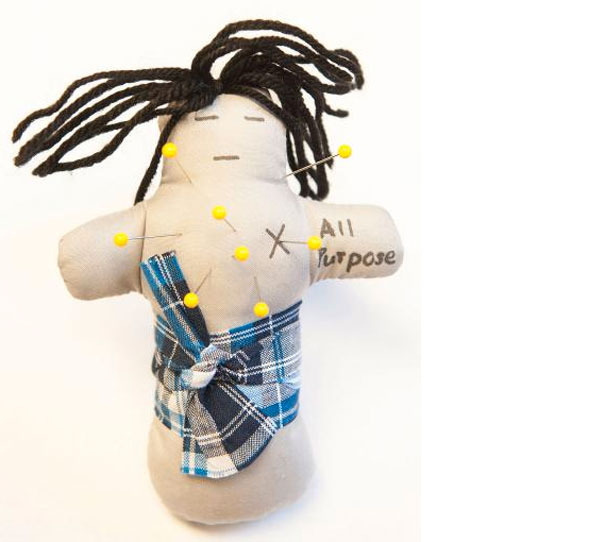 This is one of the actual voodoo dolls used in the study to measure participants’ anger with their spouses. Photo by Jo McCulty, Ohio State University

Was it something he said? Or was it low blood sugar?

In a 21-day study, they found that levels of blood glucose in married people, measured each night, predicted how angry they would be with their spouse that evening.

At the end of the 21 days, people who had generally lower levels of glucose were willing to blast their spouses with unpleasant noises at a higher volume and for a longer time than those who had higher glucose levels.

The study shows how one simple, often overlooked factor – hunger caused by low levels of blood glucose – may play a role in marital arguments, confrontations and possibly even some domestic violence, said Brad Bushman, professor of communication and psychology at OSU.

Blood glucose levels can be brought up most quickly by eating carbohydrates or sugary foods.

“People can relate to this idea that when they get hungry, they get cranky,” Bushman said.

“We found that being hangry can affect our behavior in a bad way, even in our most intimate relationships,” he said.

The research involved 107 married couples. The study started with the couples completing a relationship satisfaction measure, which asked each spouse how much they agreed with statements like “I feel satisfied with our relationship.”

The researchers measured anger in a unique way, validated in previous studies.

All participants were given a voodoo doll that they were told represented their spouse, along with 51 pins. At the end of each day, for 21 consecutive days, the participants inserted 0 to 51 pins in the doll, depending on how angry they were with their spouse. They did this alone, without their spouses being present, and recorded the number of pins they stuck in the doll.

Each person also used a blood glucose meter to measure glucose levels before breakfast and every evening before bed for the 21 days.

The result: The lower the participants’ evening blood glucose levels, the more pins they stuck in the doll representing their spouse. This association was present even after the researchers took into account the couples’ relationship satisfaction.

“When they had lower blood glucose, they felt angrier and took it out on the dolls representing their spouse,” Bushman said.

“Even those who reported they had good relationships with their spouses were more likely to express anger if their blood glucose levels were lower.”

But it wasn’t just the dolls who took the brunt of the anger. After the 21 days, the couples came into the laboratory to take part in an experimental task.

They were told they would compete with their spouse to see who could press a button faster when a target square turned red on the computer – and the winner on each trial could blast his or her spouse with loud noise through headphones.

Each time they “won,” the participants decided how loud of a noise they would deliver to their spouse and how long it would last. Their spouses were in separate rooms during the experiment, so participants didn’t know they weren’t really delivering the noise blast.

“Within the ethical limits of the lab, we gave these participants a weapon that they could use to blast their spouse with unpleasant noise,” Bushman said.

Results showed that people with lower average levels of evening glucose sent louder and longer noise to their spouse – even after controlling for relationship satisfaction and differences between men and women.

Further analysis showed that those who stuck more pins in the voodoo doll representing their spouse were more likely to deliver louder and longer noise blasts, as well.

“We found a clear link between aggressive impulses as seen with the dolls and actual aggressive behavior,” he said.

Why does low blood sugar make people more prone to anger and aggression?

Bushman said that glucose is fuel for the brain. The self-control needed to deal with anger and aggressive impulses takes energy, and that energy is provided in part by glucose.

“Even though the brain is only two per cent of our body weight, it consumes about 20 per cent of our calories. It is a very demanding organ when it comes to energy,” he said.

“It’s simple advice but it works: Before you have a difficult conversation with your spouse, make sure you’re not hungry.”