Hal Herzog on How Humans Relate to Animals 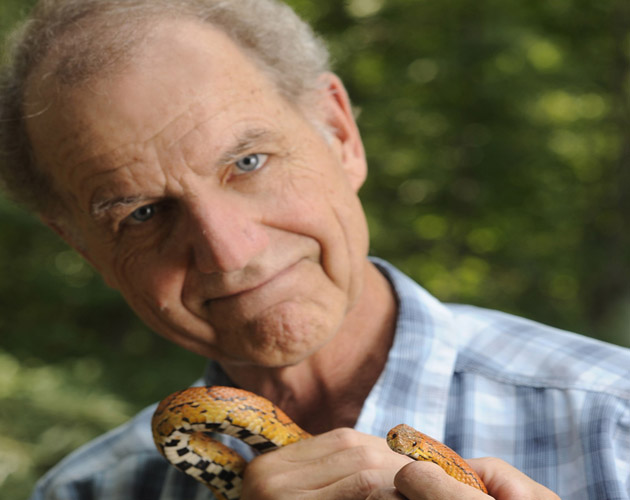 Animal behaviourist Hal Herzog talks about how humans relate to animals—and what it teaches us about ourselves.

Some We Love, Some We Hate, Some We Eat: Why it’s so Hard to Think Straight about Animals.

That’s the title of Hal Herzog’s provocative bestseller about how humans relate to animals—and why.

It’s also what he talked about at Moses Znaimer’s ideacity 2016 recently—and later in the day, during a private conversation with Zoomer.

The title of his talk: “Why Humans Have Pets and Chimps Don’t.”

Although his career started with a Ph.D. in animal behaviour—and his research as a psychology professor at Western Carolina University focusses on the interaction between humans and animals—the animal that dominates his thinking is, well, us.

“Animals occupy every aspect of human life,” he said. “When we study our relationship with animals, we are really learning about ourselves.”

Here’s what he had to say about us and them—and the ethical and moral dilemmas raised by our interaction with them:

On our hypocrisy: “In the last 20 or 30 years, there’s been a sea of change. We’re still eating as many animals as we used to. The per capita consumption of meat hasn’t gone down much. But there’s outrage about keeping orcas in captivity and the Internet exploded with outrage over the killing of Cecil the lion.”

On the gorilla at the Cincinnati Zoo: “To me it was a no-brainer to kill the gorilla. You should always save the human. But there were two innocent creatures—the human child and the gorilla. The reaction was that people had this need to blame someone. But the zoo director did the right thing.”

On the increase in concern over how we treat animals: “A couple of things have been responsible for this. Advances in cognitive psychology are showing that animals are sentient creatures. Rats experience empathy. Chimps have mathematical skills. Birds can use tools. There’s a huge amount of literature on dogs and what they can do, and how they understand us.”

On pets: “We look at pets differently now. More people are living alone and they’re the ones most attached to their pets. Once you start treating a dog like a companion, you start thinking, ‘What about the other creatures?'”

On fish: “(Animal behaviourist) Jonathan Balcombe has written a brilliant book about the lives of fish (What A Fish Knows). It’s about their emotional lives. I’m a fisherman, but I don’t look at fish like I used to. I wish I hadn’t read his book.”

On keeping pets: “Keeping pets raises a lot of ethical questions. It’s a simple one with cats, and making a cat live indoors. They’re predators. Of course, if you let it outdoors, it kills birds and has a shorter life. But people say animals should have the right to exhibit natural behaviours. Instead, cats are forced to sit indoors, watching birds flit by. That’s stressful for them.”

On having a pet neutered: “People will say it’s immoral to dock tails or ears on a dog but that it’s morally OK to cut off their testicles and deprive them of a sex life. They like to have sex, to show maternal instincts.”