The Singular Approach: 4 Professionals Reveal the “One Thing” That Defines Their Style 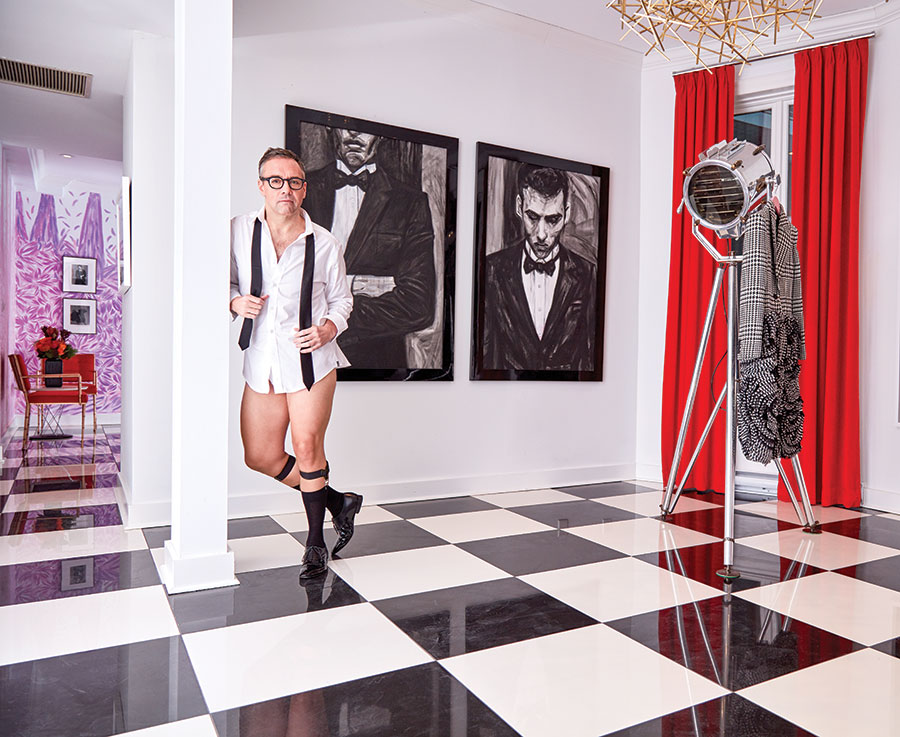 Nicholas Mellamphy poses for a photograph inside Cabine, his appointment-only fashion hub, wearing one of his favourite white dress shirts, which he says is included in his look "95 per cent of the time." Photo: Chris Chapman

Some settle on a singular approach to fashion that becomes their calling card. As imitation is the sincerest form of flattery, here are four smart dressers who each have a secret to their personal style.

The singular notion: The white dress shirt. “I discovered this particular brand six years ago at Hudson’s Bay — it’s the house brand called Black Brown, and the shirts retail for $59. The cotton looks expensive, and it has a stiff collar and collar stays.”

The inspiration:“I struggled with my weight all my life, and I never felt comfortable in a T-shirt or a knit.

“I also went to a uniform school and I always wore a collar shirt, so maybe that’s where the security comes from. Now, I wear a white shirt 95 per cent of the time. Even on vacation, I’ll wear one with shorts.

“As I age, I crave a more simplistic approach to dressing. The white
shirt is a strong statement. It’s elevated, but also rolling up the sleeves indicates relaxed.”

The edge: “On days when I’m tired, I’ll put on a white shirt, and it illuminates me. From a mental standpoint, I feel like it’s a clean slate. I’m obsessed with the crispness of it. I also like the way it looks thrown on your bedroom floor — it’s kinda sexy. Obviously, it’s a strong visual — Michelle Obama wears one on the cover of her book.”

The personal take: “I buy the slim fit and with longer sleeves, which I leave unbuttoned because it looks luxe. I have more than 100 white shirts and I have them stacked in my closet.”

The singular notion: #allblackeverything. “Wearing black makes me feel confident, and I feel it contributes to my success. It’s part of my brand.”
The inspiration “It started in my 20s, when I was working in financial services and I found myself wanting to have a uniform – the men had a uniform with suits and jackets and the women had dresses with flowers and pastels – but that wasn’t me.”

The edge: “I wanted my version of a power suit to be one where I can feel confident and where my ideas stood out instead of what I was wearing. So I wore black turtlenecks and black pants religiously for years. People who follow me on social media have noticed I wear all black. And when they meet me in person for the first time, there is a familiarity and closeness right away because they feel like they know me. They are already comfortable with me because they feel there is a consistency and know what to expect of me.”

The personal take: “As my career progressed, I started having more fun
with fashion — with fabrics and texture — but I still stuck with black because it truly makes me feel the most confident. I wear dresses in the evening — rarely to a business meeting. Pants or pantsuits, leather jackets and blazers are my daywear. In the mornings, I can be up and out the door in 30 minutes because I don’t have to think about colour.”

Who: Tony Wong, reporter at the Toronto Star

The singular notion: An all-purpose blazer. His pick: A jacket in wool high twist twill. “I bought it in Naples at the Prada store in 2007 while on a cruise. It’s more than a decade old, but the cut is still contemporary. At the time, it seemed radically short.”

The inspiration: “I need one blazer that can do it all when I travel, so I keep going back to my black Prada jacket. It is the Swiss Army knife of gear in my wardrobe. I have gotten off a 14-hour flight and gone straight to an interview wearing that jacket.”

The edge: “As a journalist, you really don’t know what your day is going to be like. The black blazer works because you are a blank canvas. The interviewee is the star. Over the last three decades, I’ve written for every section from politics at City Hall and Queen’s Park to crime, technology, sports, economics, entertainment, life, travel and my current job as the television critic. I’ve interviewed everyone from Donald Trump to Julia Roberts in that blazer. I’ve also gone to a Broadway play, shopped at Dollarama and covered a murder
trial wearing it.”

The personal take: “Maybe it’s a lack of imagination — or maybe because economy class isn’t getting any roomier for my carry-on, but this blazer is my all-time favourite essential. It is a foundation piece that is a must-have and, for me, equivalent to the little black dress for women.”

The singular notion: Novelty blazers from Canadian label, Smythe.
“I first discovered Smythe jackets more than a decade ago and thought they were perfectly made. The first time I met the designers, Christie Smythe and Andrea Lenczner, was at an event at Holt Renfrew, and I was fan-girling them. By that point it was my uniform.”

The inspiration: “I grew up in a hockey family, the middle sister between two hockey-playing brothers. In 1992, I became the marketing manager at the Hockey Hall of Fame. Then Maple Leaf Gardens hired me to be an in-arena host — the first female voice in that building. In 1998, the brand new Sportsnet hired me. The thing that makes it even more exciting was when I met the designers and found out that Christie’s great-grandfather was Conn Smythe, the former owner of the Toronto Maple Leafs, the man who built Maple Leaf Gardens, the man who the Conn Smythe trophy, given to the MVP of the playoffs, is named after.”

The edge: “Because of what I do, I’m climbing over benches during warmup to do an interview so I need to be comfortable and practical. And because they fit so perfectly, I don’t ever have to worry when I get on air about adjusting anything – the look is always polished.” [I travel a lot during the season, so it’s a no-brainer for packing.] I wear them on air 99 per cent of the time. I have more than 60 of them.”

The personal take: “I’ve been on the volunteer committee of the Conn Smythe Sports Celebrities Dinner and Auction for Easter Seals for 25 years. The designers even made me a jacket. Inside is the inscription, ‘Defeat does not rest lightly on their shoulders,’ the famous Conn Smythe motto, which was in the Maple Leaf Gardens locker room. And Christie knows that her handiwork is part of hockey now.”

A version of this article appeared in the May/June 2020 issue with the headline, “Just One Thing,” p. 91.

A Decade in Fashion: The Moments That Defined A “Greynaissance” In the 2010s