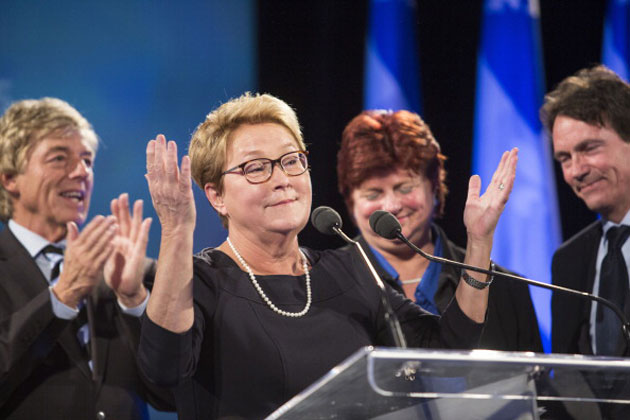 It’s time to see what I can do

To test the limits and break through

No right, no wrong, no rules for me,  I’m free!

Let it go, let it go

Elsa, Queen of Arandelle, sang these words in the hit Disney movie Frozen.

Pauline, Premier of Quebec, lived them as leader of the PQ party.

As she plunges into the icy depths where former politicians are frozen in time, let’s at least congratulate Pauline Marois for doing what Elsa did: testing the limits and trying to break through.

Like Kim Campbell before her, Marois was a woman who climbed to the top of the mountain and, once there, risked it all.

Campbell was the first woman to be Prime Minister of Canada. She lasted six months in the office.

Marois was the first woman to be Premier of Quebec. She lasted 18 months.

Marois’ daring risk was putting her most profound convictions about sovereignty and secularism before the populace.

Her platform promoted the secular charter which included forbidding the wearing of religious symbols by people in public positions, such as nurses, teachers and civil servants. She tested the waters yet again for a referendum on separation.

Right or wrong, she wanted Quebec to be free to live according to its nature in the fullest possible way.

If she was “sacrificed” by the PQ, she went more than willingly.

Campbell had inherited, in 1993, a party so low in the polls that its leader, and Canada’s Prime Minister, Brian Mulroney, stepped down.

Campbell was extremely likeable, proved to be competent in her challenging cabinet roles, and provided an opportunity for the Conservatives to test a female candidate’s electability for Prime Minister.

Her approval rating while she was in office was an amazing 51 per cent. She called an election for the fall. But she’d stepped into the role of Prime Minister while having no experience at leading the party.

And, as she stood for election, her approval rating plunged. Some blame it on her inexperience. Others blame it on a poorly run Conservative campaign.

The Conservatives ended up with an embarrassing two seats after the election, in a landslide Liberal government.

There’s still debate about whether Campbell was set up for failure by being handed the leadership and the office of Prime Minister when the party was at such a low point: “It couldn’t be any worse so let’s take a chance on an inexperienced woman.”

A campaign that included an ad that was widely seen as mocking Jean Chretien’s speech impediment did her no favours.

But Campbell must have had a pretty good idea of what she was dealing with when she accepted the position and called the election.

She let it go.