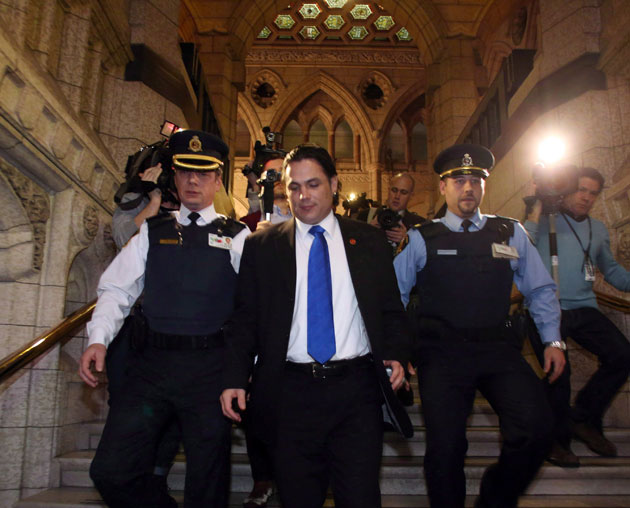 Both were categorized as “Latest Ottawa News Headlines.”

Both, I thought, referred to the same story.

One headline was about the arrest of suspended Senator Patrick Brazeau, 39, on charges of, well, practically anything you can think of, short of murder.

The other was about the cost of cleaning up contaminated sites, the most prominent, I naturally assumed, being the Senate.

Is there a site in Canada more contaminated than the Senate?

I’m still on the fence about Justin Trudeau, but I’m all for his resolve to reform the Senate.

Today, people are calling Brazeau the Rob Ford of Quebec — which is probably one of the worst insults anyone has ever hurled at Ford.

Yes, they’re both partial to cocaine. Ford has admitted to using the stuff; Brazeau is facing charges for possession.

Both have made public spectacles of themselves in drunken stupors — and just in general.

And both are embarrassingly bizarre Canadian characters. Ford’s antics are too numerous to list. But did you know that post-Senate Brazeau became manager of a strip-club called the Barefax Gentlemen’s Club.

I’m sure you do know, actually, because it’s just too lurid to ignore.

No doubt all those talk shows that exploited Ford’s bizarre behavior will now be issuing invitations to Brazeau.

I can see the promotions now for Jimmy Kimmel, CNN and anyone else who wants to cash in on the lurid behavior: Former Canadian Senator, arrested for assault, cocaine, threats, runs strip-club in Canada’s capital.

But there’s a very important difference between Brazeau and Ford.

Ford has never been charged with a crime. Brazeau was.

Ford has never been charged with sexual assault. Brazeau was.

Even more important, in his role of serving the public, Ford has never been charged with fraud and breach of trust in a case relating to his expense claims. Brazeau was.

But the biggest difference?

We were given the opportunity to vote for or against Ford as Mayor of Toronto.

He has remained accountable to us and come autumn we’ll decided whether we want him to remain in office or not.

We have no say whatsoever about people who sit in the Senate.

They’re neither politicians nor bureaucrats.

Neither fish nor fowl.

It’s beyond time to do something about this anomaly that does us no good and too much ill.