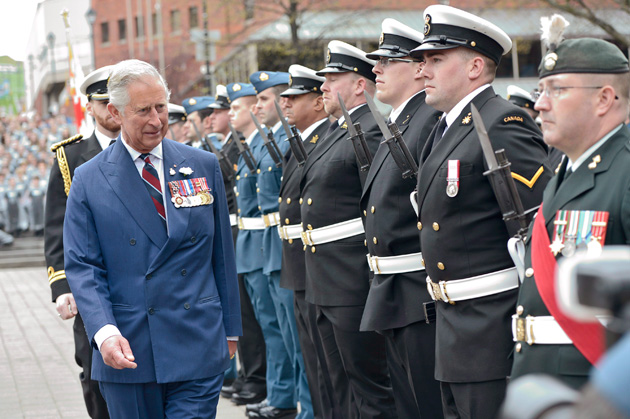 Marienne Ferguson, 78, had a nice little chat with Prince Charles in Halifax the other day. To her amazement, the conversation is being quoted all over the world.

In some sci-fi future, an evolved species will look back at the early 21st century and wonder why, when any thought expressed aloud or tweeted could boomerang into a weapon of self-destruction, smart people didn’t just stop communicating.

Ferguson, who volunteers at the Canadian Museum of Immigration in Halifax, was asked by the visiting Prince about her arrival in Canada. It was 1939, she said, just before the Germans invaded.

“And now Putin is doing just about the same as Hitler,” Charles responded conversationally, according to Ferguson.

He was referring to the Russian annexation of Crimea.

He did not imply that Putin is a monster determined to exterminate entire populations.

Putin, taking offense, is reportedly refusing to meet with the Prince as scheduled on June 6 at D-Day anniversary celebrations in France.

Meanwhile, Ferguson can hardly believe that her little chat with the Prince is making headlines and affecting international relations.

It was, she says naively, “just a little remark. I didn’t think it was going to make such a big uproar.”

On June 8, it’ll be 65 years since George Orwell’s “1984” was published. Thirty years past the date when he envisioned Big Brother monitoring “every sound you made,” even a “little remark” can make “a big uproar” through the megaphone of 24/7 news and social media.

If every observation, insensitive remark and gaffe uttered in private conversation is fed through that megaphone to infinite reverberation and interpretation, then we are all at risk of being victims of the wildly popular game of “gotcha.”

The conversation between Ferguson and the heir to the British throne was a private one. Royals have an onerous public role and duty but even they are entitled to some privacy.

In 1970, I was a reporter for the Minneapolis Star assigned to cover the Royal Family’s visit to Manitoba.

At the University of Manitoba, my alma mater, I stood at the front of a group of reporters a few feet away from where the Prince was served a hot dog lunch from a buffet.

He seemed unsure of how to attack the hot dog, holding it awkwardly. At the same time, he saw me writing furiously in my little notebook.

“Are you a student here?” he asked.

I explained that I’d graduated and was now a working journalist.

“And you’re taking notes about my eating this, are you?” he asked, in a tone that suggested, “We are not amused.”

It’s true. I was already imagining my scoop: Prince of Wales Defeated by Wiener in Bun.

After lunch, I was approached by a member of the Royal press team and told, in no uncertain terms, that one simply does not write about a Royal in the act of eating.

Even today, the list of do’s and don’ts for media covering the Royals instructs, “Members of the Royal Family are content with being photographed at most times during an engagement: those to avoid, however, are while they have food or a glass in their hand or during a meal.”

And that’s only right.

We can make a real effort to scale back the extent to which we invade people’s privacy, no matter what their status.

Or we can continue rushing ahead into Orwell’s dystopia, where there is “no way of knowing whether you were being watched at any given moment. How often, or on what system … You had to live—did live, from habit that became instinct—in the assumption that every sound you made was overheard, and, except in darkness, every movement scrutinized.”