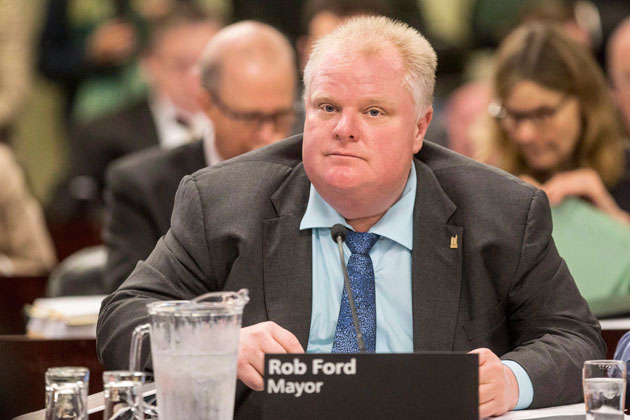 Who could’ve predicted that Rob Ford’s run for re-election would be derailed by cancer?

The man who refused to be brought down by alcohol, scandal, videos, investigative reporting, obesity, dicey associates, his own unfortunate turns of phrase and illegal drugs will now watch the race for mayor from the sidelines, tethered to machines that deliver intravenous drugs.
He’ll be fighting a different campaign now, against a formidable opponent.
The 12 cm. by 12 cm. malignant tumor in Ford’s abdomen is a pleomorphic liposarcoma, which is the most serious form of the rare liposarcoma.
According to the the Liddy Shriver Sarcoma Initiative (sarcomehelp.org), the 10-year survival rates are 39 per cent in pleomorphic liposarcoma, compared to 76 to 87 per cent for other forms of the tumor.
Over the next several days, Mayor Ford will be given a course of intense chemotherapy followed by recovery time and then a repeat course.
The goal, said his physician at Mount Sinai Hospital, is to shrink the tumor. Surgery may follow. Another, much smaller malignant tumor was also found behind his buttock and will also be treated by the chemo.
Nevertheless, Dr. Zane Cohen did say that the Mayor “will be functional, with some rough days.”
There’s no doubt that he’ll devote as much strength, energy and attention as he can spare to his brother Doug’s run for Mayor.
Doug’s campaign could be the best medicine for Rob right now.
One antidote to the anxiety and difficult emotions that come with a diagnosis of cancer, suggests the Canadian Cancer Society, is to “think about what’s important and try to manage your time by making a realistic list of things to do each day. Try to create some balance in your life. Make sure to include things that you enjoy.”
No doubt there’s nothing Rob Ford will enjoy more than campaigning for his old seat on City Council and contributing to his brother’s run for the office he’s vacating.
He’ll also enjoy the measure the sympathy and even a measure of forgiveness he’ll garner from Torontonians as he takes on this new biological, rather than political, enemy .
What he might enjoy most, however, is exercising his own forgiveness for the cynicism about his motives and health. It wasn’t a ploy after all. It was a malignant tumor. And Dr. Cohen, in explaining the diagnosis to the public, emphasized that there is no connection whatsoever between lifestyle or obesity and liposarcoma.