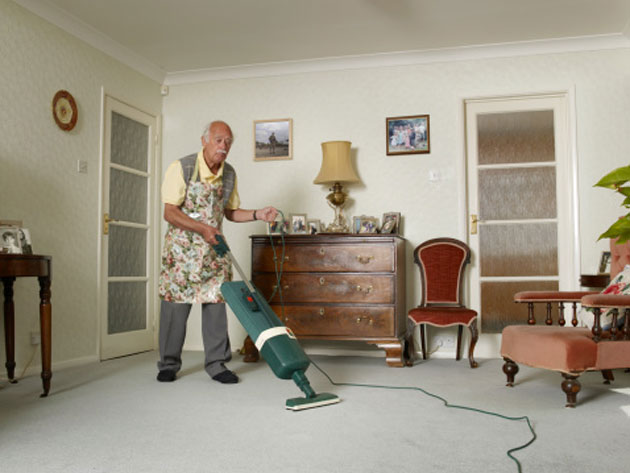 Couples who do an equal share of household chores and childcare have less sex.

Doesn’t that sound like propaganda from the Men Against Cleaning House Organization (MACHO) and its brother organization, Don’t Unload Dishwashers Ever (DUDE)?

In fact, it was the conclusion of a provocative story in the New York Times Magazine recently.

The conclusion and the research (much of it based on the writer’s psychotherapy practice) were questioned and hotly debated.

On one hand, it doesn’t make sense that couples in egalitarian marriages have less sex.

The new Zoomer Sex Survey and other sex surveys confirm what we know intuitively: it’s men who want sex most often.

And because women in egalitarian marriages are happier, less tired, less resentful and more appreciative of their husbands, they’re more likely to feel more desire for sex, too.

All those positive feelings can be a potent aphrodisiac.

A man in the kitchen can lead to a woman in the bedroom. A man doing laundry (bleaching out those 50 shades of grey) qualifies as foreplay. And when he wields a vacuum and singlehandedly defeats those dust bunnies, which woman wouldn’t swoon?

On the other hand, there’s a possibility, as the New York Times noted, that biology and logistics may work at cross purposes.

Blurring roles, some people suggest, defuses the sexual tension. Put an apron on a man and pants on a woman and there’s no longer any yin or yang. Vive la difference doesn’t pertain when there is no difference. Soon it’s all about schedules and routine and who does what when.

Fortunately, we don’t have to go back to Me Tarzan, You Jane. Me Put Feet Up, You Run Off Feet. Me Relax in Man Cave, You Cook and Clean and Look After Kids.

There’s speculation that if men do mainly “manly” chores — for example, any chore that requires a ladder or tools or that involves fire or vehicles of any size or shape (including strollers and tricycles) — la difference may still be in play.

Cooking is up for grabs. Men, of course, do meat, especially on grills. Some like to bake. They mix drinks and pour wine. Some men are experts at roasting fowl. Others make waffles or omelettes on Sundays.

Men like to be specialists, not generalists. They should be encouraged in their chosen endeavors. Women tend not to mind being generalists as long as they’re not bearing an unfair share of what needs to be done.

Such an arrangement may indeed lead to more sex.

But there’s still the problem of routine and familiarity and too much to do — when sex itself becomes a chore or simply doesn’t happen.

Nude vacuuming in a candlelit room, anyone?