Three Thoughts About Responses to the Tragedy in Ottawa 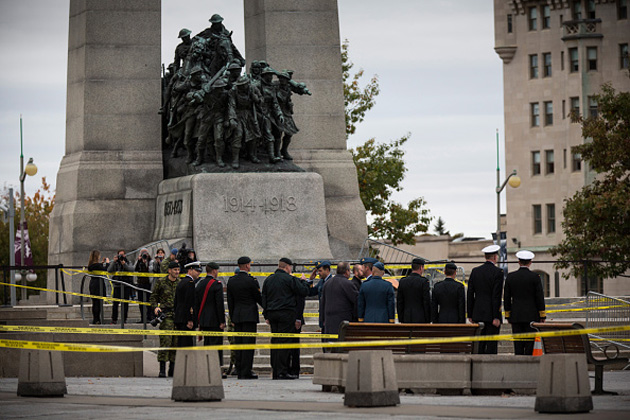 One is the tsunami of rhetoric, some of it inspiring, much of it insipid.
Yes, of course we will be will be strong, bloodied but unbowed. It goes without saying but it’s the sort of tired cliche that’s always repeated after the civic peace is shattered and vague threats that lurked in the shadows suddenly loom large and distinct in the flashing lights of emergency vehicles.
But it’s fair to question whether a couple of deranged men constitute the kind of threat to this nation that has evoked such grandiloquence.
Could an argument be made that we are giving them more credit and and notoriety than they warrant, ascribing to sick, small minds the global exteme fundamentalist motives fueling terrorism in the Middle East and elsewhere, and thereby encouraging other disturbed Canadians to go the same way?
A second cliched (and irrelevant) response cites statistics about car accidents in an attempt to downplay any threat of domestic terrorism or even any risk of a viral pandemic (Ebola, SARS).
I’ll let communications guru Peter Sandman deal with this one:
“It is natural and inevitable that people pay more attention to a death that’s unfamiliar, memorable, involuntary, dreaded, and morally significant (like someone getting shot by a would-be terrorist) than they do to a death that’s familiar, unmemorable, voluntary, not dreaded, and morally neutral (like someone making a fatal mistake in a car).
But it’s not just natural and inevitable. It’s also sensible.  There are things to be learned from Canada’s brush with terrorism – about national security and mental illness, among other topics.  It’s unlikely that yet another car accident has anything new to teach us.
Moreover, this is the week for Canadians to learn about terrorism – just as this has been the month for Americans to learn about Ebola.  It is the teachable moment for those risks.  It is not a good time to tell people they should focus on driving safety instead.
Finally, there’s the blame game people are playing. Read the comments people write (when they’re allowed to): everything and everyone from Prime Minister Harper and Justin Trudeau (depending on how you vote) to Islam to jihadism to religion in general to abusive fathers and unsatisfactory mothers to the abolishing of the long gun registration are cited as the reason for the Ottawa shooting.
But there is no reason, no single cause. Zihaff-Bibeau, like Marc Lepine, was a collection of kindling awaiting the spark that would set him afire. That kindling included his mental illness, his petty criminal past, perhaps the denial of a passport, his alienation from Canadian society. The spark that inflamed him to action was the allure of jihadism and the powerful draw of ISIS.
Many impressionable or unstable young men, and women, too, have always been drawn like moths to the fire of causes they foolishly romanticize as idealistic and anti-establishment. From the Spanish War to the civil rights movement in the U.S., there’s gratification for people ill at ease in the world in fighting for something or against something, no matter whether it’s beneficial to society or abhorrent.
The danger now is that the thrill and notoriety of identifying with jihadism and ISIS will inflame more vulnerable Canadians.