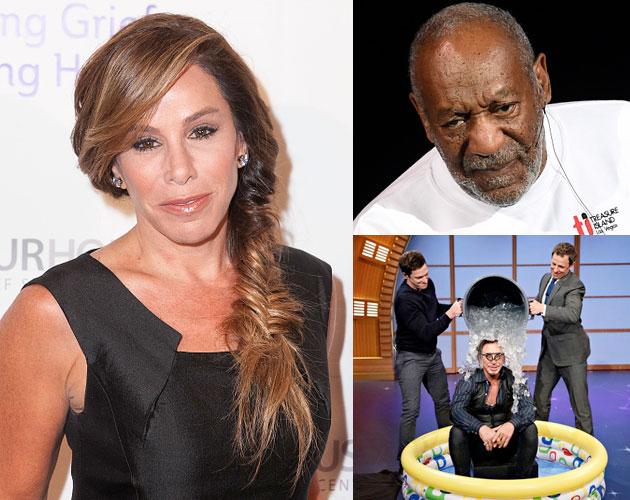 As we enter 2015, one last fond and not-so-fond look at some highlights and lowlights of 2014:

Most Tasteless Headline
“Melissa Rivers Emerges from Mourning Her Mothers’ Death and Appears to Have Had Some Work Done on Her Face”
(musictimes.com, Dec. 9)

Best Joke About Boomers in a Kids’ Movie
Villainous Octopus Dave, trying to communicate online with the Penguins in Penguins of Madagascar, loses the video connection, finally gets it back but then loses the audio connection. Says a Penguin resignedly, “Just like talking to my parents…”

Worst Fundraising Idea That Worked Anyway
Ice Bucket Challenge: Dumping ice water over your head so you don’t have to donate to the ALS Association; it raised $16 million for ALS Canada.

Most Ungentlemanly Behaviour, To Say the Least
A crowded field in 2014 with a five-way tie:
– Bill Cosby
– Jian Ghomeshi
– Ray Rice
– Liberal MPs Scott Andrews and Massimo Pacetti, both suspended from caucus after two female New Democrat MPs complained about their “misconduct.” One woman said she went to Pacetti’s hotel room but never gave “explicit consent” to the sex that ensued.

Best Balancing Act
Kim Kardashian with a flute of bubbly champagne or her bubble bum.

Most Reptilian Bid for Fame
Naturalist and wildlife filmmaker Paul Rosolie allows himself to be eaten by a snake on a Discovery TV show, entering the belly of an anaconda in a snake-proof suit.

Least Christian Behaviour (Unless You’re Talking Christian Gray)
The growing trend for “domestic discipline” among some Christian fundamentalist couples. Husbands spank their consenting wives to correct misbehavior. Websites include christiandomesticdiscipline.com and learningdd.com. The latter suggested a list of appropriate Christmas gifts for DD couples, including the Aveda paddle brush.

Most Unprofessional Behaviour
Again, a crowded field with a three-way tie:
– New York doctor Gwen Korovin who allegedly took a picture of Joan Rivers while she was under anesthesia.
– Korean Air executive Heather Cho made the plane return to the gate to offload a steward because she objected to being served nuts in a bag instead of on a plate; South Korea’s transport ministry is filing a criminal investigation and the “nut rage” lady has lost her job.
– “Peeping Rabbi” Barry Freundel who hid cameras in the National Capitol Mikveh, the ritual bath for women

Worst Attempt by a Politician to Ingratiate Himself with an Ethnic Constituent
Wisconsin Gov. Scott Walker once sent an email to a Jewish constituent to congratulate him but instead of wishing him “Mazel Tov” wished him “Molotov.”

Best Evidence That It’s the Little Things That Matter
A tie:
– Jonathan Burrows, a managing director in London at Black Rock, the world’s largest asset manager manager (“investors of all kinds entrust us with trillions of dollars”) lost his job and was barred for life from working in the financial industry after he was caught without a ticket at a London rail station and admitted that he’d evaded fares on several occasions while commuting to work.
– Harvard Business School associate professor Ben Edelman invoked the Massachusetts Consumer Protection Statute and multiple threats of legal action when he was overcharged $4 on a dinner delivery.