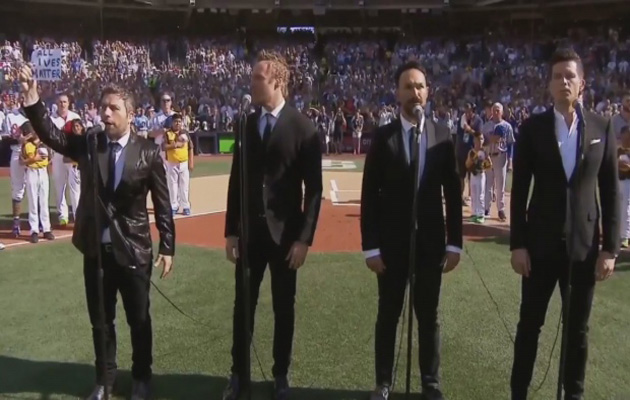 Diluting the message of Black Lives Matter by insisting that all lives matter is, simply, whitewashing the problem.

Do all lives matter?

Of course they do.

Should the words of “O Canada” have been changed by Remigio Pereira, one of the four Tenors, so that “All Lives Matter” could be inserted in our national anthem?

One performer’s personal opinions have no place in what is essentially an hymn to our nation.

But the issue goes beyond the bad judgement of a rogue Tenor playing fast and loose with Canada’s anthem at the All Star baseball game in San Diego.

All Lives Matter, while on the surface an inclusive, even innocuous slogan—who could argue with it?—has taken on a more contentious meaning.

It’s being used, especially in the U.S., as a code to counter Black Lives Matter.

Those words, which evolved from a hashtag to a movement, were initially a response to the acquittal of George Zimmerman for the shooting death of Trayvon Martin, an unarmed black teenager, three summers ago.

The words have taken on a new urgency this summer with the deaths of several non-threatening black men at the hands of police.

And then the backlash against Black Lives Matter gathered speed with the killing of five white Dallas policemen by a black sniper.

But that tragedy doesn’t counterbalance, let alone erase, the systemic racism that motivates some law enforcement officers when they stop someone who is driving while black—or that motivates a white man to kill an unarmed black teenager.

It’s that racism that Black Lives Matter is calling attention to.

Diluting the message by insisting that all lives matter is, simply, whitewashing the problem.

There are couple of invisible words in the phrase that are worth mentioning.

Some people who take issue with Black Lives Matter suggest that it’s wrong to direct the activism at white people when so many black people are killed by other blacks. That’s another problem that also needs to be addressed but it doesn’t change the fact that racism underlies much of the killing of innocent blacks by white law enforcers.

Nevertheless, it’s not too difficult to understand that longstanding systemic racism in American society, with the attendant poverty, lack of opportunity and insecurity, underlies much of the gun deaths within the African-American community.

And that, finally, is the word that matters most in all these tragic events this summer: guns.

When Americans can carry guns legally, even openly, it’s practically an invitation to shoot first, ask questions later—especially when racism is at play.

We may feel somewhat smug right now, with our “glowing hearts” in the “true North strong and free” but I’ve read the comments attached to online stories about the rogue Tenor and his vocalized opinion, and many Canadians support his action.

There is one benefit of the tension in Canada between All Lives Matter vs Black Lives Matter: revealing that the issue of race is more complex here than we usually acknowledge.

But knowing that, can we all think carefully, calm down and move on?

We are, after all, Canadians.