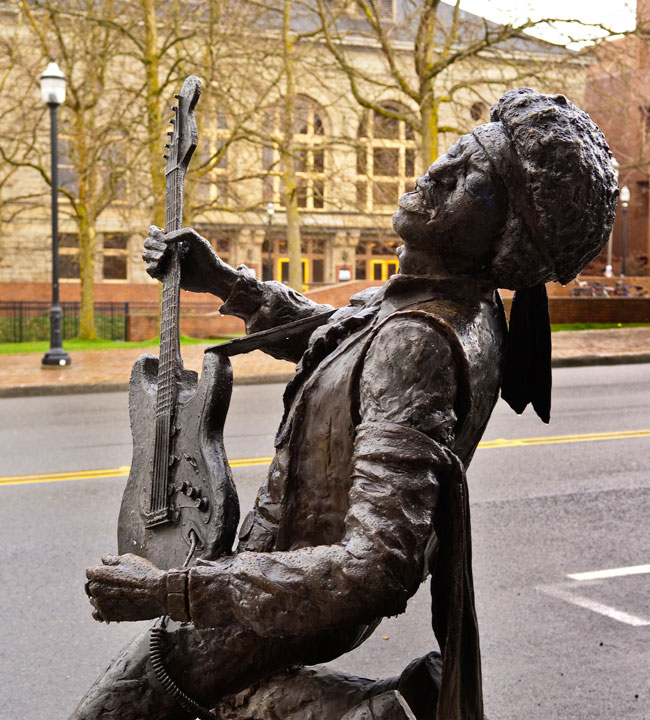 Arriving in Seattle on the Clipper passenger ferry from Victoria, I lean partway over my partner and point out the window, over the waters of Elliott Bay. “See that?” I say, gesturing at a building on a pier nearby.

“That’s the Edgewater Hotel. In 1964, when the Beatles were on their first American tour, a couple of months after The Ed Sullivan Show, they stayed there. There are these great pictures of them fishing right out of their window.”

She nods. “Uh huh. You know you tell me this every time we take the Clipper, right?”

She’s not wrong; I’m a veritable font of mostly useless music trivia, so when an opportunity presents itself to whip out a factoid or two, I don’t like to let it slip by.

You have to admire her patience; it’s not easy to live — and travel — with a rock geek.

And while it’s not one of the major cities on the traditional rock ‘n’ roll maps — I’m thinking New York, Detroit, Memphis, Los Angeles — Seattle, the birthplace of Jimi Hendrix and grunge, hometown of Heart and new home of Dave Matthews, has a lot to offer the rock ‘n’ roll fan looking for a weekend away.

Some of the attractions are obvious but essential.

MoPop, the Museum of Popular Culture, is a natural first stop. Founded in 2000 as the Experience Music Project (housed in a spectacular new Frank Gehry building in Seattle Center) by Microsoft co-founder Paul Allen, the museum features extensive exhibits from Allen’s own collection as well as other resources. The Guitar Gallery, which includes instruments from the likes of Eric Clapton, Howlin’ Wolf, Muddy Waters and Hank Williams, is an essential for anyone who even dreamed of themselves as a six-string hero, while the Nirvana: Taking Punk to the Masses exhibit contains more than 200 items tracing the career of the home-grown grunge superstars.

The Pearl Jam: Home and Away exhibit, currently on display, is a treasure trove of items, memorabilia, music and video (a display of Eddie Vedder’s notebooks was a particular favourite). And if you’re on a grunge kick, don’t miss the statue of Soundgarden’s Chris Cornell outside the museum, erected after his tragic death in 2017.

The centrepiece of MoPop (which also features areas devoted to science fiction, fantasy and horror) is a towering sculpture of guitars and other musical instruments, named for the Jimi Hendrix song.

Another tribute to Hendrix, who was born in Seattle but had to move to England to make his break, is in the Capital Hill neighbourhood. The life-size bronze statue, which captures Hendrix in mid-solo, was created by artist Darryl Smith.

If you’re looking to expand beyond the rock ‘n’ roll tour, Seattle Center also features the Chihuly Garden and Glass, a museum and garden devoted to the art of Seattle glass-worker Dale Chihuly.  The Collections Cafe, which features elements from Chihuly’s personal collections as decor, is a good spot for a snack or lunch.

Taking It to the Streets

While these are a couple of obvious choices, much of Seattle’s rock ‘n’ roll history is a bit off the beaten track. You should definitely at least have a drink in the lounge at the Edgewater Hotel, which now features both a Beatles Suite and a Pearl Jam Suite (designed with the co-operation of the band and featuring even more PJ memorabilia). You might even find someone to tell you the Led Zeppelin story, which I’m too much of a gentleman to repeat here.

If you’re hotel-hopping, a secret slice of Seattle’s rock ‘n’ roll history can be found inside the hallowed halls of the Fairmont Olympia. Their elegant Georgian room – which features both a fabulous brunch and high tea – was, in 1977,  the site of a now-legendary concert by New York punk band The Ramones, which saw more than 500 people spilling out of the 150-person capacity room. According to our server, the show was rumoured to have been so loud it blew out the front windows of the room; she wasn’t sure, but isn’t it lovely to imagine?

Much of Seattle’s rock history is on the streets. A short walk from the business core, Belltown wears its grunge heart on its sleeve, with clubs like the Crocodile still packing in crowds on a regular basis. And if the Fairmont is a bit too tony for brunch, you might want to try the Five Point Cafe, where punk and grunge culture are still very much alive.

And when it comes to rock ‘n’roll, live is where you want to be. With classic venues like the Showbox and the Paramount Theatre (where the Guess Who recorded their beloved live album) and dozens of bars and halls between, there’s always something happening on stage in Seattle; more than enough to keep you busy and always a reason for a return trip.