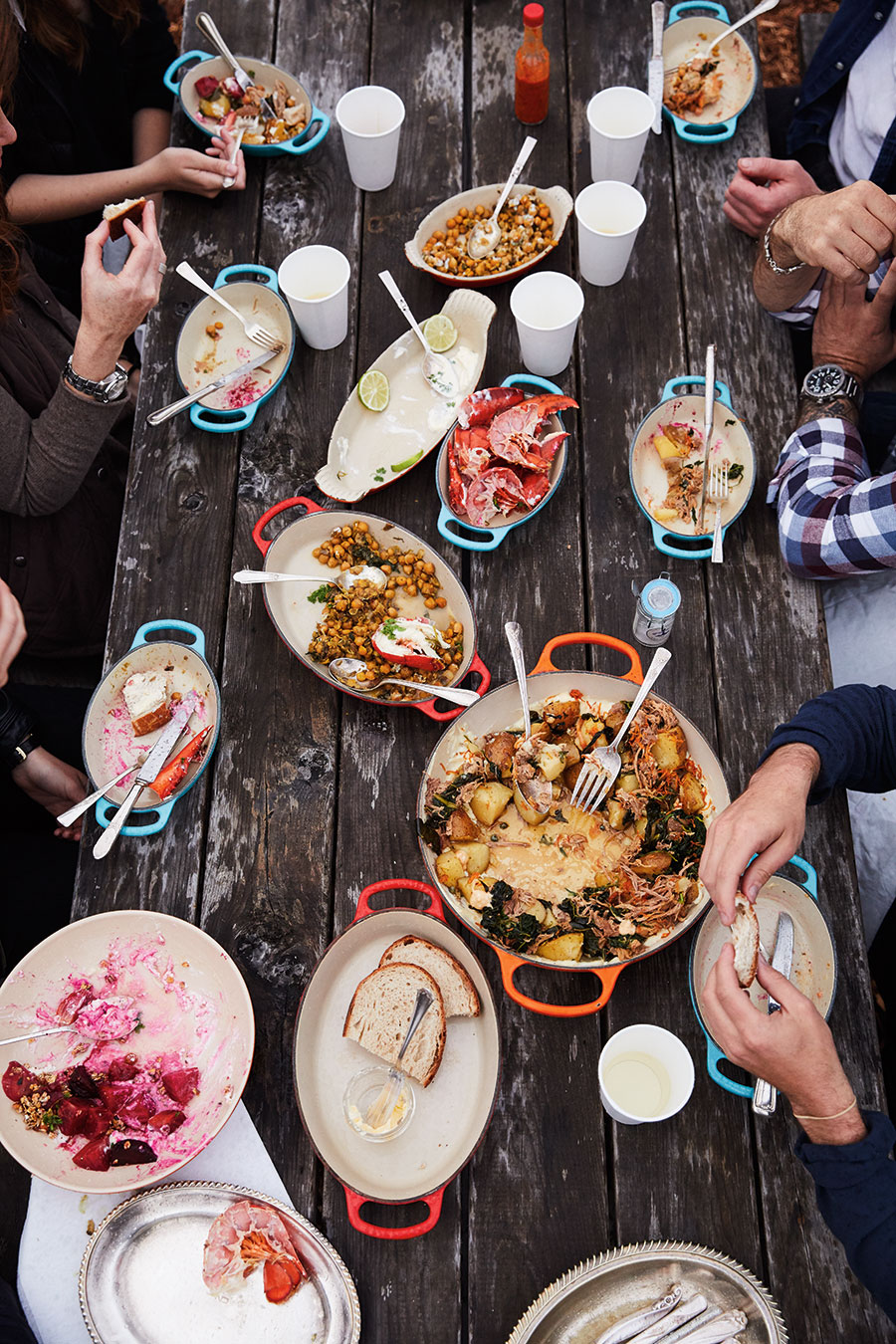 On a culinary journey like no other, Alyssa Schwartz discovers a true north spirit and, along with the adventure, meets the chefs, the foodies and the tastemakers that are redefining the flavour landscape of Canadian cuisine.

The most Canadian moment of my life came on the eve of the summer solstice, also nearly the eve of Canada’s 150th birthday. Though the world typecasts our citizens as hardy northerners, on the cusp of summer, my Facebook feed was full of friends marking the start of the season in shorts and T-shirts. I, meanwhile, was fulfilling every Canadian stereotype, standing in the middle of a snow flurry on the bank of the Sylvia Grinnell River, just outside of Iqaluit, swathed in layer on top of layer: a heavy cashmere turtleneck sweater over insulating merino wool, a Canada Goose jacket and toga dress fashioned out of a Bay blanket yet on top of those.

On my head, I wore a knit toque, my red Olympic mittened-hands wrapped around a tin mug filled with steaming apple cider.

And I still couldn’t get warm.

The Inuit calendar has six seasons; with uneven mounds of snow still splotched across the scrubby tundra, ice floes bobbing in the grey, flat water alongside us and a wide, white sky that was just as bright at 9 p.m. as it was in the middle of the afternoon, this evening felt firmly of both upirngaaq, Inuktitut for the season of moving ice, and aujaq, when the sun never leaves the sky.

It’s not unusual for these Inuit-language names to be translated into the more simplistic Spring and Summer. But this Spring-meets-Summer night didn’t resemble a season that I knew, nor did the wind-whipped air – with its tang of dust and mineral, absent the familiar musk and green scents of soil and vegetation – carry a smell recognizable to my nose. In a similar fashion, the North, as it revealed itself to me during a weeklong journey that touched upon three Canadian coasts, turned out to be both intimately familiar and strikingly unlike the place I’ve called home all my life.

Called Across the Top of Canada and organized by Edible Canada, a restaurant, food shop and culinary touring company based in Vancouver, my trip was conceived as a foodie journey, bringing together chefs from Toronto, Vancouver, St. John’s and Quebec and guests from across the country. In the span of eight days, we flew by a private charter plane from Vancouver to Whitehorse and on to Yellowknife; we touched down in Rankin Inlet before continuing north to Iqaluit and then east to St. John’s, stopping in Churchill, Man., for an afternoon of beluga spotting as we crossed the country a second time on the way back to Vancouver.

Welcome to what I like to call the largest grocery store in the world,” Rosanna Strong, the owner of Strong Interpretation, a Yellowknife-based touring company says, as we stroll along a boardwalk that runs from the Northwest Territories Legislative Assembly along the shore of Frame Lake, through short, spindly birch and poplar trees and low-lying shrubs, gesturing at the boreal forest which surrounds us.

Wearing a white nylon windbreaker, scarf wound around her neck and orange expedition-style hat on her head, Strong appears outfitted more for a serious trek than a shopping trip. But she’s dressed for the mosquitos rather than the weather: on this sunny June Sunday morning – the third day of our journey across the North – the temperature is already above 20 degrees Celsius, and we only have to walk a few steps before Strong spots the first item on her shopping list: a vivid pink wild rose. “I’m sure you pay big bucks for rosehip tea, but I just harvest mine out here,” she says, noting that the blooms are full of calcium, iron, magnesium, vitamins A, E and C, and other nutrients.

“This is a perfect time of year because everything is just going pop, pop, pop, pop,” Strong says, walking further into the forest. In a moment perfectly timed to demonstrate this point, she stops seconds later and crouches at a low bush covered in small, waxy blue berries. Juniper she says, motioning that I should have a taste. I pop a berry into my mouth – it starts sweet and then evolves into something gently spicy and evocative of a cedar closet.

Though foraging might seem like an obvious activity for a culinary-themed tour, Northern Canada isn’t the most obvious destination for such a trip. At this latitude of 62.45 degrees, we’ve yet to hit the northernmost point in our journey; taking off the next day, we’re airborne for just a few seconds before Yellowknife’s relative lushness yields to barren rock and tundra. “It’s tough to grow here and tough to live here,” Strong said during our foraging walk, words that come back to me as I look out at the bleak landscape from my window seat thousands of metres above. “It’s easy to get overwhelmed by the vastness, but what’s interesting is the details. There’s a lot [of food]. It’s just a matter of what you know.”

More complex is that while the landscape looks like a desert, when it comes to food, the reference is more societal than literal – for thousands of years, Inuit populations were able to reap significant nutrition from this land (Strong, who holds a zoology degree with a minor in botany, learned most of what she knows about northern flora uses from local Dene elders and other foragers). But factors such as climate change and hunting regulations have made traditional means of food gathering less reliable than for generations past; meanwhile, Statistics Canada data shows that grocery store prices in Nunavut can be up to three times higher than nationwide averages.

Yes, the North is a surprising destination for a food tour. But if understanding the food of a place is one key to a better understanding of it overall, then it’s also a great lens through which to explore. On a bus tour around Rankin Inlet, a town in Nunavut where as many as eight out of 10 children may go to school hungry, our guide took us to a local grocery store and pleaded that we tell everyone we knew back home about the $15-plus bags of sugar and packages of no-brand cheddar on its shelves; while Inuit are allowed to hunt – as they have in the Arctic for thousands of years – another man we met told us his licence only allowed him to do so on a site two days’ travel away, which, he said, is as good as no licence at all.

And yet they are eager to share with us: at a reception for our group at Rankin Inlet’s community centre, a functional but dilapidated building that feels like a monument to Jordin Tootoo, a locally born and raised NHL player whose middle name means Thunder in Inuktitut and who is seen as a role model for a community of kids lacking in icons, we’re greeted by the mayor and other local representatives. They’re waiting for us with a freshly prepared lunch of Arctic char chowder, caribou, muskox sliders and, for dessert, cake studded with precious blueberries harvested off the tundra during last summer’s all-too-brief growing season.

Part of the draw of the Edible Canada journey is that it’s accompanied by some of the country’s most respected chefs: Jeremy Charles, the co-owner and executive chef of Raymonds, a St. John’s restaurant that is frequently touted as the best in the country; Wayne Morris of Toronto’s acclaimed Boralia, whose menus are inspired by the historical cuisines of Canada’s native peoples and early settlers; Ned Bell, a Vancouver-based champion of sustainable seafood; and Stephane Modat, chef at Fairmont le Chateau Frontenac in Quebec; along with Grant Sceney, World Class Canada’s former Bartender of the Year and the head of the cocktail program at Fairmont Pacific Rim, who strolled with me during Strong’s foraging tour, collecting spruce tips and fireweed, an ingredient which later appears in a cocktail made with whisky and cranberries, chilled with ice freshly carved off an iceberg. While guests spend days touring, the chefs hunt, fish and forage, meet local food producers and collaborate with regional culinary talent on semi-nightly culinary feasts.

While Yellowknife is exploding with the first fruits of summer, when we touch down in Iqaluit a day after our foraging tour with Strong, there’s still ice bobbing in Frobisher Bay and lingering mounds of white snow dotting the land like the irregular speckles of a cow’s hide. With a stiff wind whipping up dust around town, its effect is driving the temperature down near freezing.

My grade school social studies teachings come alive for me up here: on a tour of Apex, a town adjacent to Iqaluit, I touch my hand to the weather-worn wood of a boarded-up Hudson’s Bay lodge on the edge of the bay and marvel. And childhood stories of how Inuit cultures express affection come back to me in a most unexpected and delightful way: after being led across the scrubby banks of the Sylvia Grinnell River on a plant tour by Aalasi Joamie, a community elder who speaks just a handful of English words – she pantomimes the traditional uses of the ankle-high shrubs and brush and somehow language barriers fall away – I touch my hand to my heart in gratitude of her time. When she tilts her face to mine in response, I’m confused for an instant. But then I remember a long-forgotten lesson about Inuit kisses – kunik, the greeting is called – and I lean in. As we gently rub noses my eyes fill with tears.

Our group gathers back on the same site as this enchanting exchange later that day for the solstice party that went down as one of the most meaningful – and Canadian – moments I can recall. It’s not fancy – just our group and some locals standing around a bonfire on the riverbank (so far are we above the tree line that the firewood had to brought with us on our chartered Air North plane, a line of local volunteers standing on the runway helping to offload it onto a truck) – oh, also, it’s snowing. It’s as perfect a Canadian stereotype as my outfit – but also just perfect.

Dinner is a feast of country foods: foraged greens and marshmallows made with tundra berries, turbot and char, fried goose eggs and local foie gras, even seared seal meat, served over a triticale grains which had been brought up from Whitehorse.

Later, I strike up a conversation with Ned Bell, who is executive chef for the sustainable seafood program Ocean Wise. As we stand around the fire toasting ravenberry (an Arctic red berry) marshmallows made by one of the local chefs, we discuss Bell’s experiences that afternoon gathering ingredients for dinner, cooking in this unusual setting, and that seal, which is tender and meaty with a whiff of sea brine that feels unexpected but shouldn’t. It’s Bell’s first time cooking with the controversial meat, a primary form of sustenance for people of the north for so many generations, and we chat about some of the many aspects of it, from the humanity of the hunt to bounty of the stock, that would surprise southern Canadians.

“Isn’t that why we’re here?” Bell asks. “To try foods we haven’t tried before and to think of them in different ways and ask questions about them that we may not have even thought to ask if we were somewhere else?” He’s right, of course. But it strikes me this trip is about so much more than food. It’s a meeting of east, west, north and south, old and new, past and present, familiar and strange; for this brief, magical moment, all of these feel knitted together into one magnificent and utterly Canadian fabric.

For details, go to acrossthetopofcanada.com.