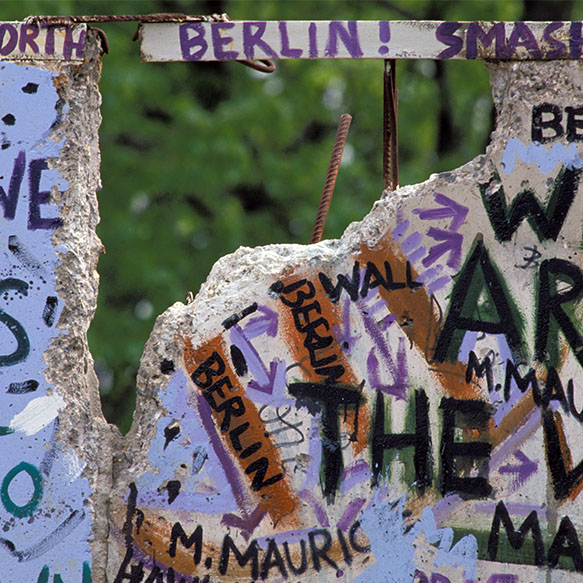 On a family trip to Berlin, Journalist Elizabeth Renzetti sees the city in a new light as her teenage son and daughter soak up the city's history. Photo: Ingram Publishing/Getty Images

Though COVID restrictions are still in place, we can travel vicariously through our contributors who share stories of how their (pre-pandemic) journeys uplifted them and, in some cases, even transformed their lives. Here, Elizabeth Renzetti discovers that Berlin offers the perfect balance of history and liberty, especially when travelling with teenagers.

Here at the Mauerpark, anything goes. I’m sitting with my husband and my 18-year-old son in this historic park in northern Berlin, which was once bisected by the infamous Wall and is now overrun with buskers, vintage-clothing vendors, earnest activists who’d like you to sign their petitions – and this guy, a juggler holding two flaming torches.

Beside me, my son is howling with laughter at the sight of the small child holding two fiery torches almost as big as he is. We’ve come to Mauerpark for the celebrated Sunday Flohmarkt, or flea market and then climbed the stone steps of the nearby amphitheatre to watch the free show, which varies every week. It could involve break dancers or tightrope walkers or karaoke singers or, like today, a juggler with suspect judgment.

A man lurches up the steps carrying a tray of small glasses and a bottle of cheap vodka. He’s dispensing shots at one euro apiece. The drinking age in Germany is 16, or 18 if you want hard liquor, and people drink everywhere. You may begin to see why Berlin is a teenager’s paradise: the city of dark clubs and darker spies, of David Bowie and techno, the survivor of a crushing past and incubator of a gleaming future. My son looks at me, eyebrows raised. No, I am not going to give him a euro for a shot of vodka. I’m not Berlin-cool yet. I may never be.

When we moved to Germany’s capital for a year beginning in summer 2019 with our two teenagers in tow, I knew a few words of German – ein bisschen Deutsch – and a reasonable amount about its history. It would be impossible not to know the history, if you’d had one eye half-open in high school. What I was not prepared for was the way that history lives everywhere in Berlin: it is soaked into every stone that marks a Holocaust victim murdered by Nazis, every bridge where Cold War spies were traded, every remaining bit of the Wall that kept heartbroken families apart for almost three decades. It’s like a history museum come to life, only this museum is wearing a PVC bondage suit.

I don’t want to scare you off bringing your teenagers to Berlin with talk of its wild side. In fact, there may be no greater city in the world for teenagers. They are at precisely the right age to be exposed to the darkness the city represents: the way that Fascism can grip a country so quickly and destroy its most vulnerable; the way that a government’s spying on its citizens results in a population torn apart by fear and paranoia. These are big topics, deeply relevant to today, and Berlin will teach and entertain your kids in equal measure, the medicine going down with a spoonful of Zucker.

One afternoon, my son and I visit the Stasi Museum, located in the former headquarters of East Germany’s fearsome state police. Griff, like most teenagers, is interested in surveillance culture, the main instrument of which we carry in our pockets and call “mobile phones.” As our Stasi Museum guide tells us about life growing up in the GDR, where suspicion and conformity were means of survival, Griff wanders off to examine the old-school surveillance mechanisms: tiny cameras hidden in pens and ties, listening devices tucked behind hideous 1970s wallpaper. I’m equally fascinated by the human webs of intrigue, the husbands who spied on wives, children who snitched on their parents. How could any society thrive with such black rot at its core? Of course it couldn’t, and when the Berlin Wall came crashing down on Nov. 9, 1989, the GDR came crashing with it (but not before East Germans ransacked the Stasi headquarters, looking for their files).

My daughter, Maud, is 14, again precisely the right age to be bowled over by this haunted, louche city. She loves art and history, and here they live together as one thing. Museum Island is a ridiculous abundance of looted treasure and German masterpieces located in a gallery complex in the middle of the Spree River. It is the perfect place to talk about the bad old days of colonialism as we visit some of her favourite treasures in the Neues Museum, including the bust of Nefertiti and the fabulous Golden Hat, a must-see for all astrology-obsessed teens – it’s a Bronze Age calendar that doubles as a fetching piece of headgear. As we enter the museum, Maud trails her fingers over the bullet holes in its walls, mementoes of a 80-year-old war the city almost didn’t survive. The Neues was mostly destroyed in that war, and when it was rebuilt between 2003 and reopened in 2009, a wise decision was made to leave the war scars in the old building’s skin as a memorial and a warning.

Pretty much everything worth visiting in Berlin contains this duality: there is new and old, beautiful and horrifying. It is the right city, it seems to me, to teach young adults about ambiguity, about the compromises of adulthood. “They could only paint on this one side,” Maud notes as we visit the East Side Gallery, a graffiti-covered remnant of the Berlin Wall that was left standing and is now a psychedelic tribute to the talent of numerous graffiti artists. “People could only approach the Wall on the west side,” I tell her. “On the other side, there was the death strip, and East Germans would be shot if they went anywhere near it.”

“Well,” she says, as if discovering the stupidity of adults for the first time, “there’s no way that could have lasted.” She’s right, of course: walls don’t work. I could have repeated it a thousand times, and it would not have had the same effect as seeing the ghost of this strange, brutal experiment.

It goes on, everywhere we visit: Daniel Libeskind’s Jewish Museum Berlin, so beautiful to look at and so soul-shredding to contemplate; at Strandbad Wannsee, we swim in a clear lake next to a cluster of adorable beach huts. A short drive away from the idyllic beach is the house where Hitler’s top lieutenants met in 1942 to plan the extermination of Europe’s Jews (it now houses an interpretation centre and is open to visitors). History comes at you fast, as the young people like to say, and often when you’re not looking.

But teenagers are not necessarily looking for dualities the way their anxious parents are. For teenagers, Berlin lives up to its reputation for freedom, a laissez-faire place where people spend all day drinking beer in parks and at night bring their dogs into restaurants. Kids can go skateboarding at Tempelhofer, the abandoned airfield, and practise their climbing skills on an old East German Trabant hanging from the sky at a climbing park in Mitte, the city’s centre. With a straight face, they’ll tell you they’re going to the museum – but not that it’s the museum of Computerspiele, or video games, where they can test their skills on consoles old and new. Shopping might involve buying vintage clothing by the kilo, and later they’ll wear their best finds to one of Berlin’s innumerable nightclubs (parents or grandparents, you may want to be safely asleep for this one).

When they’re running low on energie and require some essen, the eating options are plentiful and usually cheap. Your teenagers, if they’re like mine, will happily stuff their faces with dÖner sandwiches and Berlin’s inexplicably popular delicacy, currywurst. It helps to have the constitution of an 18-year-old to survive a plate of currywurst, which is essentially sausage drowned in curry-flavoured ketchup. I’m telling you this as a friend; learn from my mistakes.

You don’t need to have currywurst with them to share the delights of Berlin. You just have to hang out with them and be open to learning from this mad, wonderful place, where the past is kept alive so that it will never be repeated.