Take a Virtual Tour of Boughton House, the ‘English Versailles’ 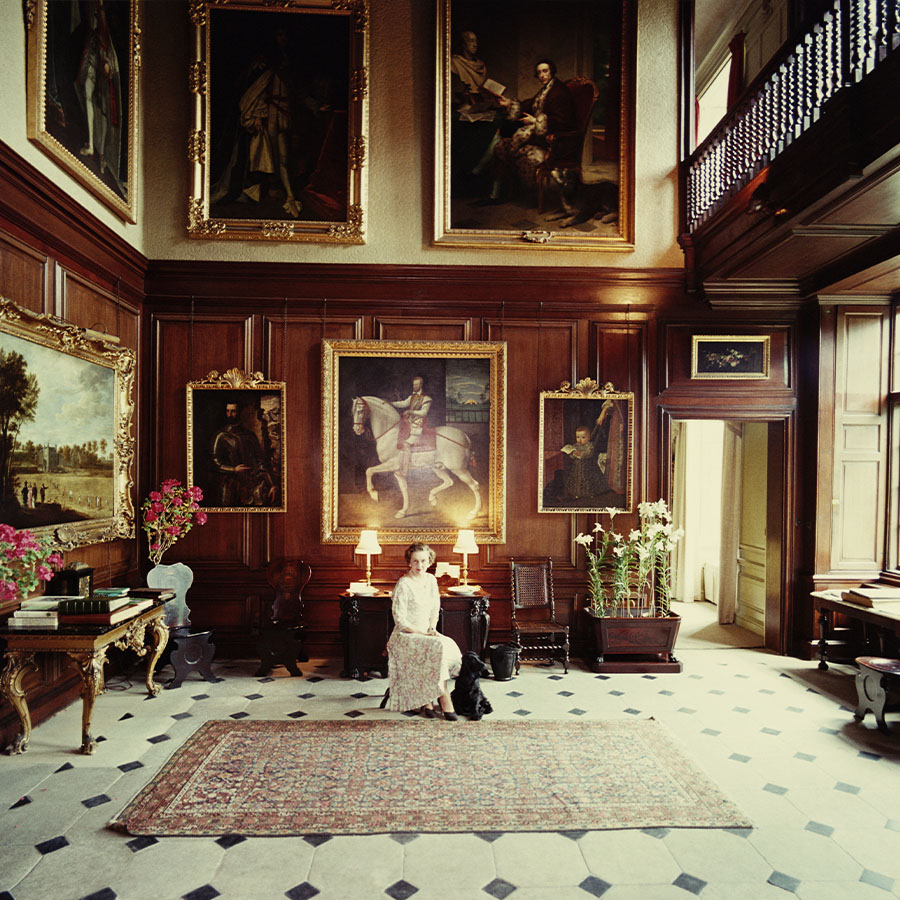 The Duchess of Buccleuch and Queensberry in the hall of Boughton House, Kettering, April 1958. Photo: Slim Aarons/Getty Images

If you are a country house fanatic like me, and you’ve been lucky enough to spend time travelling around Britain to seek them out, you might have visited some of the greats: Petworth, Blenheim, Chatsworth.

But have you heard of Boughton House, the “English Versailles”?

As an art historian born in England who works on the art and culture of Louis XIV’s France, I’m a little embarrassed to admit I only learnt about Boughton very recently.

Now, I yearn to book a flight to England to visit the house rebuilt by Ralph Montagu (1638–1709), the first Duke of Montagu, in the flashy new French style back in the 17th century.

Watch: A Virtual Tour of the Grounds at Boughton House

Montagu inherited his family’s country seat in Northamptonshire when his father died in 1684. A monastic building was converted into a manor house by Sir Edward Montagu in 1528, following the dissolution of the monasteries by Henry VIII. The younger Montagu’s renovations began upon his inheritence and continued well into the 1690s.

The “Sun King” had transformed his father’s modest hunting lodge at Versailles into the most magnificent palace of the age. By 1680, it was the French king’s principal residence and the centre of government.

According to one account written shortly after Montagu’s death, Boughton was “contrived after the Model of Versailles, with extending Wings, excellent Avenues, Vistas and Prospects; for Rich Furniture, Exquisite Gardens, Beauty of Building, and advantageous Situation, scare to be equalled in Britain.”

Montagu was a greedy and ambitious fellow. He married twice for money and to advance his social status. He first went to France as an ambassador of King Charles II of England in 1669.

Although he was a minor noble, as the representative of the King of England his official entry into Paris was of unequalled magnificence. He developed a taste for the finest things at the time France was fast becoming the centre for luxury in Europe.

He travelled to France again in 1678, and returned to England with more than 200 trunks filled with works of art and furniture.

To live in the magnificent way he did in France, Montagu needed a house to display his treasures. With aid of his first wife’s dowry, he built Montagu House in London — which would become the site of the first British Museum in 1755, before being demolished to make way for a new grand museum in 1850.

Montagu employed all manner of French architects, painters, sculptors, wood engravers, furniture makers and silversmiths to decorate his London house and country seat. He commissioned artists like Jacques Rousseau and Charles de la Fosse who had worked for Louis XIV at Versailles.

Montagu was a Francophile through and through. His household staff were nearly all French — everyone from his housekeeper to his wigmaker — and the entertainments he gave were in the French style, with French dancing and music.

The main building of Boughton House is much as it was in Ralph Montagu’s time. The mansard roof and plain white stone of the façade lend the building a distinctly French feel.

Despite what Montagu’s contemporaries thought, it is not that similar to the Château at Versailles. It looks more like the lost Château of Saint-Cloud, where Montagu spent time in the circle of the English princess, Henrietta Maria, who married Louis XIV’s only brother Philippe.

I don’t want to visit just to see its lovely Frenchified exterior. Boughton is one of those rare country houses still in the hands of the family that built it.

Today, it is one of the ancestral homes of the Duke of Buccleuch, passed on by marriage in the 18th century.

Boughton is not the largest, nor the fanciest, of the Buccleuch seats. This is probably why it remains intact, full of the treasures collected and commissioned by the first Duke of Montagu.

Among the hundreds of trunks of objects Montagu brought back with him from France was a desk attributed to Pierre Gole, furniture maker to Louis XIV. According to family tradition, this was one of the personal gifts the French king gave to Montagu. The Gole desk is an exquisite treasure shimmering in the gold and silver tones of its pewter and brass inlay.

Objects have lives, too.

Just as the first Duke of Montagu was an English ambassador to France, this desk became a French ambassador to England. But where Montagu only played the role of ambassador for a few years, the desk has been in ambassadorial service for centuries, sitting at Boughton waiting for an audience.

Houses like Boughton delight me more than any museum. There is something so special about seeing works of art where they have remained for centuries.

Objects in museums are a little like birds in cages. By contrast, when you glimpse an exquisite object like that shimmering desk in a country house it’s like spying a rare bird in its natural habitat.

Robert Wellington is a Senior Lecturer of Art History and Visual Culture at the Australian National University This article is republished from The Conversation under a Creative Commons license.