Paris and the Champagne Region of France: An Art Nouveau Tour 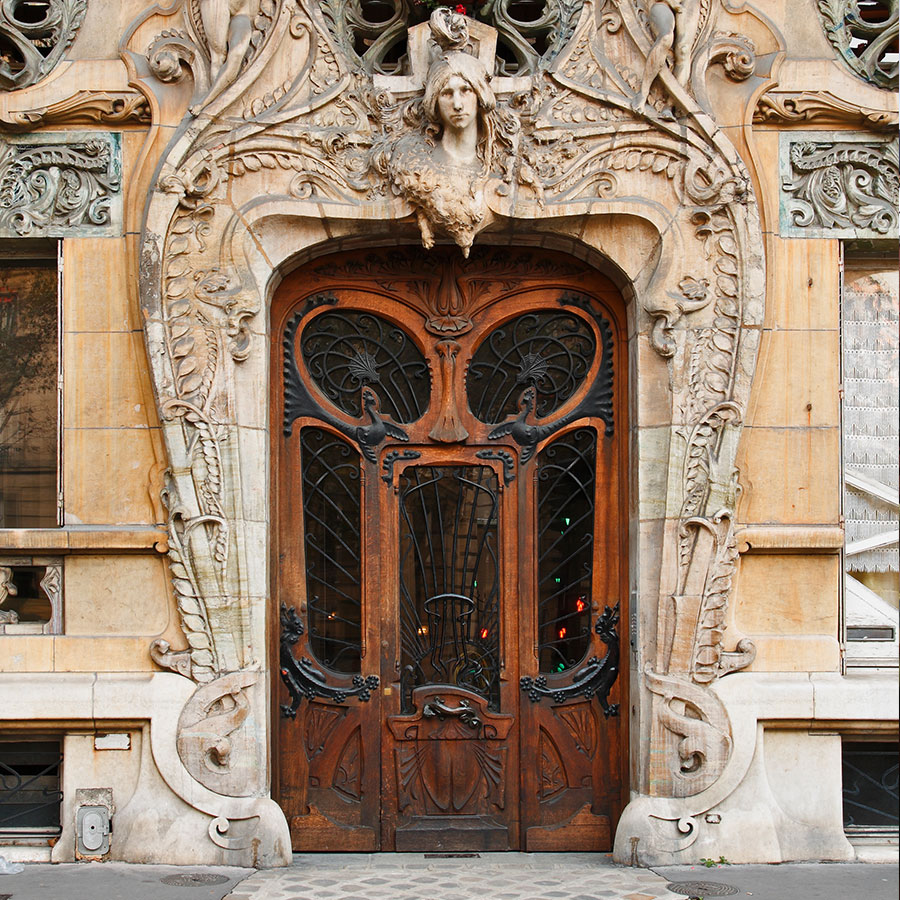 The entryway to the Lavirotte Building, depicts a lush and intricate Garden of Eden. Photo: S. Greg Panosian/Getty Images

I wish I could have eaten the decor. The menu at Bouillon Julien in Paris has typical French fare, including escargots, tête de veau and flank steak. All light and very reasonably priced but not particularly notable. However, the experience of being in this little gem on Rue du Faubourg Saint-Denis in the heart of the French capital, was the real standout, lighting a spark of appreciation for art nouveau that became a guiding light during a recent visit to France.

We chose Julien based on menu prices — half of what we had been seeing at other restaurants. Walking in, I expected a “cheap and cheerful” vibe but instead was met with stunning stained glass ceilings, floor to ceiling murals of belle époque figures standing in their own versions of a flora-inspired paradise and a giant wooden light sconce carved into the likeness of a peacock. The tiled floor was designed, I was told, as a wild columbine and daisy meadow. All of it was jaw-droppingly beautiful and earned the Julien Historical Monument status in 1997. Opened in 1906, it is a classic example, and perhaps some of the best preserved in the city, of art nouveau design, architecture and art.

I had never really been aware of the art nouveau movement prior to my visit, but after spending that dinner gawking at Julien’s walls and becoming sated by the art, I became enthralled to learn more about it.

The movement, popular between 1890 and 1910, is best known for producing elegant art and design, taking inspiration from the organic natural forms of the stems and blossoms of flowers and plants. This period of unique and vibrant creativity grew out of the arts and crafts movement and flourished after the end of Impressionism and before the start of the better-known art deco movement, which began after the end of the First World War.

Art nouveau paintings tend to be colourful with flowing forms, as exemplified in the works of artists like Henri-Toulouse Lautrec and Paul Gaugin. Examples of art nouveau design are seen daily by anyone wandering around the streets of Paris. The  iconic entrances to the Paris Metro, for example, were designed by Henri Guimard, one of France’s art nouveau pioneers.

I quickly learned that the best-known sculptor from the period is Auguste Rodin. So we decided to pay a visit to his former residence, now a museum. Located at 77 Rue de Varenne on Paris’s Left Bank, the Musée Rodin and surrounding gardens are a tranquil oasis of sculpture and greenery. It was a thrill to see “The Thinker”, arguably his most famous piece, but what took my breath away was how the fountains and sculpture in the garden are woven into the natural surroundings. I was envious of the handful of people who were smart enough to make the most of the moment, sitting on benches under the dappled sun, reading books and sipping rosé. The celebration of art, nature and life that is art nouveau, clearly on display.

A short walk from the Rodin Museum, 29 Avenue Rapp, also known as the Lavirotte Building, named for the architect Jules Lavirotte, is one of the best- known surviving examples of art nouveau architecture. The entryway to this apartment building, erected in 1901, depicts a lush Garden of Eden and is considered one of the most richly detailed art nouveau structures in Paris. It is well worth stopping by to snap a photo.

After Paris, we headed to Epernay to visit my niece and her French husband who had recently moved to this town in the heart of France’s Champagne Region. Epernay and its surrounding vineyards were declared a UNESCO World Heritage Site in 2015, and since that time its famous champagne houses, mostly closed to the public prior to that, have been welcoming visitors inside.

Perrier-Jouët, lesser known in North America, but one of the preeminent champagne houses along Epernay’s fabled Avenue de Champagne, has woven an historic connection to art nouveau and nature into the DNA of its brand. Its headquarters, the Maison Belle Époque, is a showcase of one of the largest collections of art nouveau in France, with original pieces by Rodin and Toulouse-Lautrec, complemented by ornate pieces of furniture by Henri Guimard. The signature wreath of Japanese anemone flowers that adorn the bottles of Perrier-Jouët’s champagnes were designed by art nouveau pioneer Emile Galle in 1902 for the brand’s “Belle Époque” prestige cuvée.

We were lucky to enjoy lunch at the Maison as it is only offered twice a week, on Thursdays and Fridays. Inspired by renowned French chef Pierre Gagnaire and created and realized by his protegée, executive chef Sébastien Morellon, the five-course “Banquet of Nature” luncheon was designed to pair with the cellar master’s champagnes. The opposite of how a drink and wine pairing typically works. Our menu matched the stages of growth in the surrounding vineyards, from seed to maturity highlighting the various floral notes and the unique chalk-based soil for which the Champagne region is renowned.

The dishes were art in and of themselves; scallop pascaline with a nettle sauce, which created the taste of chalkiness in my mouth, poached sea bass in a sea urchin bisque, flavours that were combined to awaken our taste buds and a veal blanquette, which when paired with the Perrier-Jouët Belle Époque 2013, mimicked the flowering of the vines on my tongue.

Half-way through that meal, on the final day of our trip, I realized that in the case of art nouveau, it might actually be possible to see the decor and eat it too.