Cathedrals and Colour – A Day Trip in Cologne, Germany 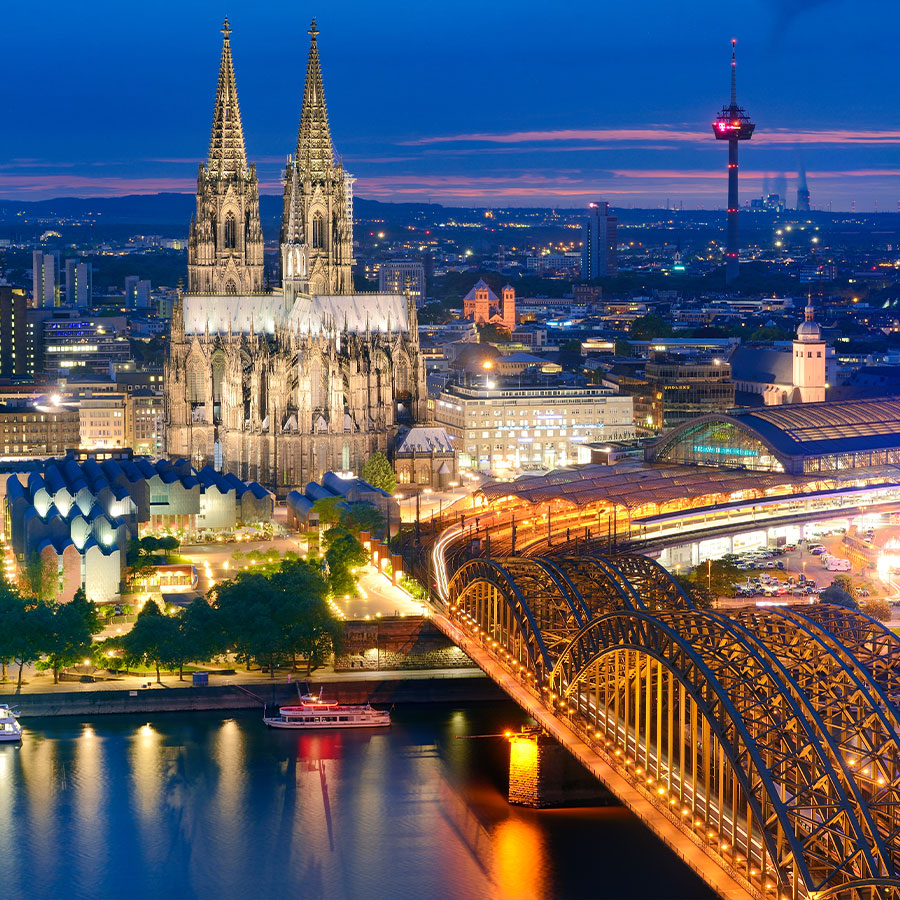 With its location along the Rhine River, Cologne, Germany's skyline is dominated by the twin spires of the Cologne Cathedral and the Hohenzollern Bridge. Photo: Courtesy of GNTB

With its location along the Rhine River, Cologne, Germany, is a popular stop. Its skyline, dominated by the twin spires of the Cologne Cathedral, and the Hohenzollern Bridge that slashes across the river and joins the main city with the Deutz neighbourhood are easily spotted from a distance, particularly if you’re arriving via river cruise ship.

If you’re a war-history buff, you may be interested to know that the Cologne Cathedral was in the sights of many Allied bombardiers (my father-in-law’s included), but somehow was spared. Considering its sheer size, it’s a miracle the bombers did not destroy their target as the city around it crumbled to dust. But perhaps it was its size that mattered. The largest Gothic church in northern Europe, also known as the Cathedral Church of St. Peter, its twin spires made it so recognizable it became an important navigation point for pilots.

Those spires have been standing in this city in Germany along the Rhine River since the 1880s, but building on this site began in the mid-1200s. It is believed that one reason architects endeavoured to create such a monument to the almighty was to house the holy relic shrine of the three wise men. As I stand in its shadow, I crane my neck, following the spires as they pierce the noonday sky, looking dark and ominous even as the rays of the sun beat down. There may not be a star to follow for me on this day, but I’m drawn to it, and venture inside to have a quick look.

The cathedral is Roman Catholic, and the building is mainly sandstone, a porous stone that reacts to sulphuric acid in the rain, which explains why the exterior looks black. But on the inside, there is light. Dappled and rainbow, streaming through the stained-glass windows. One particular panel is a modern interpretation, made up of squares, or pixels, simply entitled Cathedral Window, designed by local artist Gerhard Richter and installed in 2007 in the south transept of the cathedral.

The Hohenzollern Bridge was not so lucky. It was destroyed by German troops in an effort to hold back the Allied assault. Rebuilt directly after the war’s end, now it is a rail bridge that also allows for pedestrians; on this sunny day the walkways are lined with people strolling across, but it is also the most-used rail bridge in all of Germany. Its graceful arches stretch almost slinky like across the Rhine, a softly modern juxtaposition to the spikes of the Cathedral. On the banks, picnics are happening, and children and dogs play on the grass-lined Rheinpark, a public green space that runs 40 hectares parallel to the river.

But Cologne is more than its cathedral (although it’s estimated that 20,000 people visit it each day — more than any other place in Germany). On the day I made my pilgrimage to the town, there was a wedding taking place in the Alter Markt, near the Rathausplatz, or Old Town Hall square. The couple, two dapper gents in a classic convertible VW Bug, were being sent off with ribbons and unicorn and pink flamingo balloons. The square is equally as colourful, lined with five-storey buildings in every hue of the rainbow. Cafés and restaurants face the Alter Markt, which is also the home of the fountain dedicated to Jan von Werth. The local lore goes a bit like this: Jan, a lower-class sort of Romeo type who was rejected by the upper-crust Griet, went off to fight the war and returned a hero and a general. Who’s sorry now, Griet?

Further exploration reveals more colourful row houses, some that have been standing since the 1600s, but most are replicas based on historical records; others have been painted on a whim with citrus brights sidled up along pastel pinks and mint greens. It’s a joyous distraction from the grey cobblestone streets and the dark facade of the cathedral.

And we mustn’t forget the beer. We are in Germany, after all. In Cologne, in the Altstadt, you will find the Bier Museum and, yes, you can sample some of the local brews, since it’s actually a bar that features about 50 beers, including many on tap. Another local favourite hangout, Papa Joe’s Jazz Bar, is just around the corner.

Editor’s Note: With its location along the Rhine River, Cologne, Germany, is a popular stop for river cruise ships. I was taking a Rhine cruise with AmaWaterways and, as part of the day’s itinerary, the cruise director had arranged for an optional walking tour of the city. The guide was local, very informative and kept a brisk pace throughout. When taking any sort of walking tour or excursion, I recommend you check with your travel advisor or director for levels of fitness and activity before booking.

Canada to Remove All COVID-19 Border, Travel Measures From October 1