The Great Lakes Effect: Taking a Cruise Through Time, Full of Childhood Nostalgia, History and Science 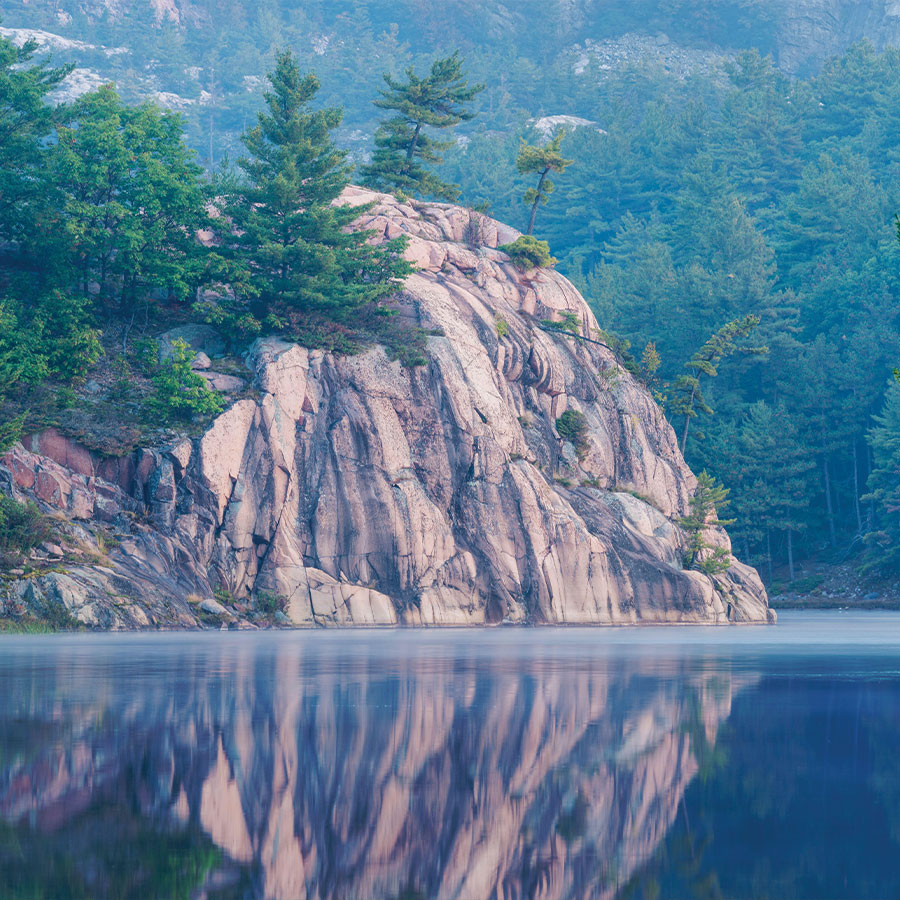 My parents called me the Killarney Kid; that’s how much I loved our camping trips to the north shore of Georgian Bay. Every August, mom and dad would pack up the tent trailer, cram me, my two sisters and the dog into the green station wagon with the faux-wood side panels, and make the six-hour drive from London, Ont., to the same campsite in Killarney Provincial Park about 100 kilometres southwest of Sudbury, Ont. For weeks on end, the Canadian Shield was my playground. After swimming until my fingers were wrinkled like prunes, I spent hours hunting for quartzite, foraging for wild blueberries, rock-hopping over smooth granite humps and exploring the surrounding forest.

There were squabbles over the sleeping arrangements, since two kids had to share the bottom bunk bed – separated only by sleeping bags – while the third would have the coveted slab of plywood above, perched on fold-out metal legs.

On a Tuesday in early August, I got out of a big bed with four fluffy pillows, snow-white sheets and a traditional Norwegian blanket in a Scandi-cool stateroom full of blond wood on the brand-new, 378-passenger Viking Octantis expedition cruise ship. I pressed one button to raise the light-blocking shade and another to lower the top half of my floor-to-ceiling window – the so-called Nordic balcony – to behold the Killarney landscape for the first time in more than 50 years. The water, rocks and trees are part of my story, and connect me to my childhood, my country’s history and my ancestors.

My late mother always told me her great-uncle was a famous Great Lakes sailor, but it wasn’t until I researched Capt. Robert Dow Foote that I discovered he not only helmed many schooners and steamers, but once commanded the 600-passenger SS Noronic, “The Queen of the Great Lakes.” (The Noronic went up in flames in 1949 while docked in Toronto, killing more than 100 people and marking the end of the Great Lakes cruising heyday.) It seems I come from a long line of mariners, since Capt. Foote’s uncle, according to an 1898 article in the Toronto Globe, was an officer on a ship that searched for the Franklin expedition, and Capt. Bob, as he was known to friends and family, never sailed without his grandfather’s parallel rule, an old-school navigation tool.

When my great-great-uncle died in 1923 at 72, newspaper articles praised him for piloting ships through treacherous weather, including the 1913 “Big Blow,” when 250 people and 12 ships were lost on the Great Lakes during a November gale, and for dashing into the water near Collingwood, Ont., to save a fisherman who had become entangled in his nets and fell overboard in 1870.

For these very personal reasons, I was thrilled to board the Viking Octantis for its eight-day Great Lakes Explorer cruise from Milwaukee, Wis., to Thunder Bay, Ont., which sailed over Michigan, Huron, Georgian Bay and, after passing through the Soo Locks, Superior. It was a week of superlatives: first cruise; first visits to Milwaukee, Mackinac Island, Mich., Parry Sound, Ont., Frazer Bay and Silver Islet; first trip through the Soo Locks; first kayak paddle on Lake Superior; first year I’d sailed, paddled or swam in all five Great Lakes; and the first trip back to my beloved Killarney.

The childhood nostalgia was intense as I gazed through binoculars at the pink granite topped with windswept eastern white pines. Through adult eyes, I saw a Canadian landscape immortalized in Group of Seven paintings.

Instead of an early morning dash with a bar of Ivory soap to the chilly concrete bunker known as a provincial park washroom, I had a shower in my ensuite bathroom with heated floors, which was stocked with Freyja products, a Nordic skin care line only offered on Viking cruise lines. I didn’t have to wait until the water boiled on a camp stove to eat breakfast; I ordered room service. When I was thirsty or hungry, I didn’t whine at mom; I pressed a button to summon my attentive steward, Wayan, or took the stairs, or elevator, to the fifth deck. I had heard about all-day, gluttony-inducing smorgasbords on cruise ships, so I was pleasantly surprised by the decently paced intervals for breakfast, lunch and dinner at the buffet-style World Café, where lineups formed at the sushi bar and the steak-and-lobster grill station at 6 p.m. sharp.

Viking launched the Octantis, built at an estimated cost of US$225 million, from Norway in January 2022 with a maiden voyage to Antarctica. With the addition of its identical twin, the Polaris, in September, the ships will take passengers on expeditions to the Antarctic, Arctic, Great Lakes and the Eastern seaboard.

For a science geek, the ship is a floating paradise, staffed with two ornithologists, a climatology and oceanography specialist, a geologist and a chief scientist. “This is not a cruise ship with a side of science, this is a fully working research vessel,” says Damon Stanwell-Smith, the University of Cambridge-trained biologist who is the head of science and sustainability on the Octantis. “The back of the vessel is the technical space and is paid for by the front of the ship.”

Environmental impact on the Great Lakes, one of the largest freshwater ecosystems on Earth, is of paramount importance, especially in the Georgian Bay archipelago, which was designated a UNESCO biosphere region in 2004. The high-tech ship uses a dynamic positioning system to hover at the exact latitude and longitude entered into a computer to lessen its impact on the lake bed; uses electricity in ports to reduce fossil fuel emissions while idling; dims lighting on the bridge to lessen bird strikes; recovers heat from the engines to generate electricity; and chemically incinerates brown water, solid waste and food scraps on board.

I joined a geology lecture in the science lab, where I learned the rocks around Lake Superior tell a 1.85-billion-year-old story about the meteor that crashed into the Earth near Sudbury, with a force twice that of the one that wiped out the dinosaurs. Geologist Julien Cornet explained that when the Earth’s crust was crushed, magma bubbled up and heavier metals sank to the bottom of the crater. When I kayaked near Silver Islet in Lake Superior, where Cornet says $3.5 million worth of silver was mined – “the dollar of the 19th century” – I saw a remnant of this cataclysmic event in a jet-black outcrop of crystallized melted magma near the Sea Lion arch in Sleeping Giant Provincial Park.

The lab overlooks the hangar, where the “toys” are stored in the belly of the stern: 17 Zodiacs, two special operations boats on mechanized slipways, 16 seaworthy kayaks and two six-person yellow submarines. (The submarine dives are dependent on the weather, and one group was disappointed when high winds cancelled their trip below the surface of Georgian Bay.)

It was the bridge tour that wowed me. I was disappointed when Capt. Anders Steen, sounding like a middle manager at Dunder Mifflin, excused himself to dash off to a team meeting. I wanted to know whether he thought all the high-tech instruments have taken the romance and swashbuckling adventure out of the job in the past 100 years, given it replaced a lot of labour that would have been done by calculation, educated guesswork or flying by the seat of the captain’s underpants.

On the Octantis, there were banks and banks of computer screens, some fed by 300 closed-circuit video cameras, so the captain could see the ship from every angle. There were joysticks and levers and buttons, and tiny triangles moving around on the radar screen. Most large vessels have an auto-ID system that reveals what kind of boat it is, its length, width and speed, and the closest it can pass to the ship without colliding.

That said, the Octantis rarely feels like it’s moving, let alone in any peril, and there is only one night of rough water on Georgian Bay as we sailed toward the Soo Locks. At 9:30 p.m., Gordon Lightfoot’s classic Great Lakes tune, “The Wreck of the Edmund Fitzgerald,” was running through my head while the ship gently rocked and shuddered in the waves. “The legend lives on from the Chippewa on down/ Of the big lake they call Gitche Gumee/ The lake, it is said, never gives up her dead/ When the skies of November turn gloomy.” I turned off all the lights and sat in the dark, watching the swells. Although we weren’t on Superior and it wasn’t November, and the only imminent danger was my imagination running wild.

By the time I woke up the next morning, all was calm and the sun was shining as the ship approached the Soo Locks. At 23.5 metres (77 feet) wide, the Octantis had about five metres (16 feet) of clearance on either side. There was the sound of a slight scrape on the port side as the ship maneuvered out of the lock and around a bulk carrier, and then we were on Lake Superior, sailing toward Silver Islet, the last stop before Thunder Bay.

After the cruise, I excitedly told friends about my 20-kilometre bike trip around the perimeter of Mackinac Island, the Parry Sound Bikes tour around the harbourfront, the bus excursion to Killbear Provincial Park to learn about a birch bark canoe built by Anishinaabe youth, and the geology lecture where I held a pellet of taconite – the crushed iron ore the Edmund Fitzgerald was carrying when it sank in November 1975.

I may have dined like a king and slept like a baby, but I will remember the cruise, especially, for that magical day in Killarney. After a kayak paddle, and a feast on fried whitefish at the Killarney Mountain Lodge, I was ready for my special mission: to swim, possibly for the last time, at Killarney. I knew, like the children jumping off the dock, I would acclimate to the frigid temperature and eventually be able to paddle around. After many agonizing minutes of hesitation, I jumped into the channel and shot right back out. The water took my breath away, just as I remembered, and that was enough. I did not linger in the sun, trying to warm up, because there was a tender waiting to ferry me back to the cruise ship, where a plush bathrobe, slippers and a hot shower were waiting for the Killarney Kid.

Check the website, vikingcruisescanada.com, for available dates. At press time, only May and June sailings were available for Milwaukee to Thunder Bay. • Price per person: From US$8,395 • Airfare per person: From US$799 • Drinks: Free beer, wine and soft drinks at lunch and dinner • Excursions: One free land excursion in every port (must be booked ahead)

A version this article appeared in the December 2022/January 2023 issue with the headline ‘The Great Lakes Effect’, p. 86.

Canadian Staycation: Must-See Stops in Ontario’s Niagara-on-the-Lake, Plus a Recipe to Try at Home