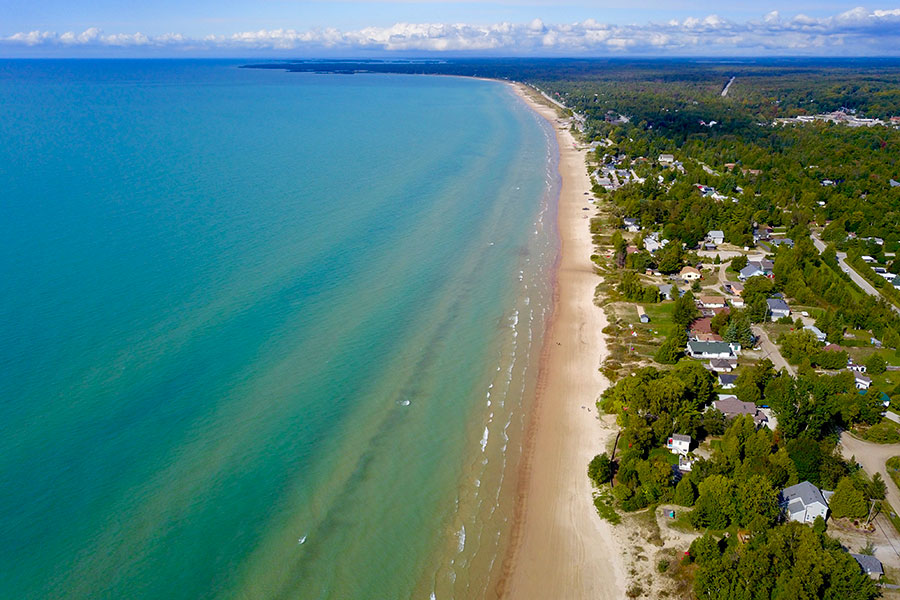 With the warm weather luring people out of isolation during these pandemic times, beaches can be a great place to practise social distancing while still enjoying the great outdoors. Keeping in mind that different provinces have different rules for reopening and public gatherings, we’re revisiting our look at some of Canada’s best beaches.

California’s beaches may be the most famous in North America (or are Floridians about to rise up and protest?) but Canada has its share of fantastic places to enjoy the water and catch the rays — almost too many to mention. Here are six of our favourites.

Located along the shore of Lake Huron west of Owen Sound, Ontario, Sauble Beach was voted the best freshwater beach in Canada by Reader’s Digest readers. There’s a reason for that too – 11 km of sandy beach. Created by sandbar deposits, the water is shallow and warm which makes it a treat for young and old alike.

The town of Sauble Beach is friendly, and the beach’s reputation means there are enough visitors to keep the people-watching intriguing. But for those who want to explore beyond the confines of a towel on the sand, the area also offers a unique chance to commune with nature — the Bruce Peninsula National Park, a world biosphere preserve, and a little further afield, the Fathom Five National Marine Park — home to 22 ship wrecks and several lighthouses.

The 7 km of beaches within the Lesser Slave Lake Provincial Park are simply stunning – white sand and inviting water. But Devonshire Beach is something special indeed, with rare sand dune ecology that goes back 1500 years. It’s also the site of an annual sand building competition. You can also view the lake from the 983-metre Marten Mountain Viewpoint, within the provincial park.

The town of Slave Lake itself is a hub for recreation and activity when you’ve had enough of the tranquil peace of the provincial park. While you’re in the area, enjoy the Riverboat Daze, the Lesser Slave Lake Song Bird Festival and annual fishing tournaments in the area and along the lake as well.

Qualicum Beach is one of the “grande dames” of Canadian seaside destinations, and a truly traditional beach resort town. Its location and sandy beaches make it a popular spot for swimming and beachcombing. It offers lovely views of the Strait of Georgia, Texada and Lasqueti Islands as well as the Coast Mountain Range.

The town itself offers a sense of Vancouver Island culture – with beautiful and extensive private garden, local theatre, jazz events, and several museums just a few of the ways to appreciate the area. There’s also a strong natural heritage here, with several provincial parks within driving distance.

Grand Beach, Manitoba, is located within the Grand Beach Provincial Park. There are actually two beaches stretching 3 km – the West Beach has perhaps the dubious distinction of having been selected as one of the world’s best beaches by Playboy Magazine. The East Beach is perhaps quieter but also popular with families. Both have clear freshwater lake and long stretches of sand to recommend them. The lake itself is shallow with many sandbars. Beach volleyball is a definite must, even if it’s just as a spectator.

The town of Grand Beach has been a resort town since the railway arrived in 1916. Its festive feel remains an attraction for visitors who have had enough sand for the day.

Nova Scotia’s Northumberland Shore offers some of the warmest waters north of the Carolinas. Melmerby’s mile-long sand beach is one of the finest beaches in the province and a fantastic saltwater destination. Nearby New Glasgow offers historic sights, an artistic community, and fantastic shopping and dining.

Brackley Beach, located in Prince Edward Island National Park, offers long stretches of pristine sandy beaches and majestic dunes of the sort that enthusiasts of the Anne of Green Gables miniseries are sure to recognize. But look for conservation measures along the dunes: unique flora and fauna is protected by National Parks initiatives along the shoreline.

While you’re in the park, of course, visit the literary landmark Green Gables – it may feel a bit touristy, but it’s also a Canadian traveller rite of passage.

7 Most Bizarre Beaches in the World

Skin Savers: How to Choose the Sunscreen That’s Right For You